Inmates in Michigan prisons, assisted by experts from some of the state’s most important universities, are studying and applying restorative practices in a growing effort to transform themselves, the Michigan corrections system, and their families and communities. They are even working to improve relationships between other inmates and prison staff.

In November 2016, a group of incarcerated offenders at Macomb Correctional Facility in New Haven, Michigan, organized a Restorative Justice Summit, an annual event first held in 2014 to demonstrate restorative practices and advocate for their broader use throughout the Michigan Department of Corrections (MDOC).

“Our goal is nothing less than changing the culture of this state’s entire penal system,” inmates wrote in a letter inviting the the International Institute for Restorative Practices (IIRP) to the Summit. “We have incarcerated men willing to do the work. We have university members willing to support us. We have an entire corrections department willing to listen” (Bey, D.C., Espie, J.R., Tipton, J., Hibbler, S., September 1, 2016).

Director of MDOC Heidi Washington attended the Summit. “It was a great day and I was glad I could be there,” she says. “I was impressed by what I saw. The Theory Group is doing great work on how offenders’ behavior affects other people and the community.”

The Restorative Justice Theory Group, the group of inmates who organized the Summit, grew out of courses taught by University of Michigan, Dearborn (U-M), faculty in Michigan prisons since 2008. 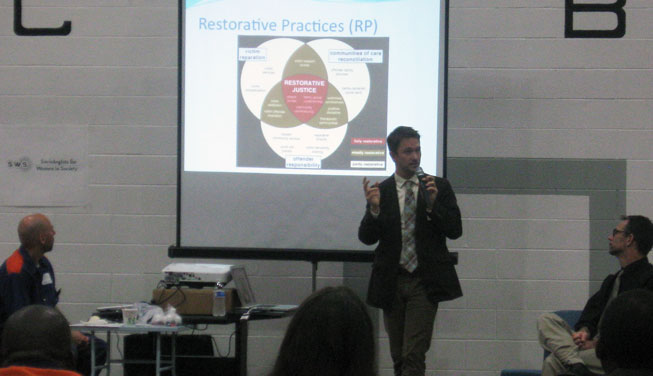 MSU Academic Specialist and IIRP Licensee Derrick Franke presents during the Restorative Justice Summit at Macomb Correctional Facility.Paul Draus, Ph.D., Associate Professor of Sociology at U-M, Dearborn, the group’s current advisor, says that when the group started, they studied the theory of restorative justice through intensive reading and a global survey. “Over the years, as they learned more and met more practitioners, they’ve moved toward practicing themselves and advocating for the use of restorative justice in prisons, the community, legal settings and with police.”

The impact of their practice is tangible within the prison, says Dr. Draus. A unit supervisor told him how effective the men in the group are at maintaining a respectful atmosphere within their unit. The supervisor often asks the men for help resolving conflicts with other inmates in the prison.

Several years ago, lifelong Detroit resident Henry McClendon, Jr., Michigan Regional Representative for the IIRP, trained the group in Introduction in Restorative Practices and Using Circles Effectively. “They are some of the best practitioners!” he exclaims.

McClendon recalls a previous Summit when the men scripted a restorative meeting between “Michael and Rocky,” two inmates who learn that Rocky is in prison for murdering Michael’s son. Says McClendon, “When the role-play ended, the inmates told the people in the room, including judges and prosecutors, ‘We need you to make it possible for us to have these types of meetings in prisons. This type of situation is not uncommon.’”

McClendon, who is currently working on a project to develop restorative neighborhoods in Detroit, says the work in prisons will have a real impact on the community. “If you think about kids living in the Ninth Precinct who have parents who are incarcerated, helping an inmate engage their kids in a restorative way is so important.”

In August 2016, IIRP licensed trainer Derrick Franke provided Facilitating Restorative Conferences to the Theory Group, teaching them the IIRP’s Real Justice model. This year at the Summit the group demonstrated their new skills by facilitating a restorative conference about an offender who had committed armed robbery.

As an Academic Specialist in the School of Criminal Justice at Michigan State University (MSU), Franke also works at Cooper Street Correctional Facility in Jackson, Michigan, teaching a course through the Inside-Out Prison Exchange program. The Inside-Out program, operating across the United States and in multiple countries, groups inmates with other college students in undergraduate courses, which are taught in prisons by professors from the participating colleges. In fall 2016, Franke offered “Restorative Justice” as a three-credit criminal justice course to 16 inmates and 16 MSU criminal justice students. A centerpiece of the course was Franke's adaptation of the IIRP 2-Day Facilitating Restorative Conferences training, which he has been licensed to teach since 2007.

Students at Cooper Street Correctional Facility in Jackson, Michigan, including prisoners from the "inside" and MSU criminal justice students from the "outside," learn about restorative practices by working in circles.One of Franke’s “inside” students in the course commented, “Our society is in desperate need of a sincere way to reestablish relationships, respect and mutual understanding.” Restorative practices showed him a way for “even the worst feelings to be changed into positive feelings of self-worth.” Another inmate noted that restorative processes “put the victim first and give them a chance to vent, as well as start to give them back their sense of safety and closure.”

Franke has been doing similar work in prisons for years, previously developing a project in an Indiana prison to study the impact of a restorative community reentry process. While direct meetings with victims were not always possible, Franke had success running reentry circles with inmates and family members who were frequently the indirect victims of a crime. This promising research will be published later in 2017.

One participant in the Indiana study commented, “[The conference with my family] was the closest to freedom I’ve felt since I’ve been incarcerated. I got things out that had been weighing me down. I felt like I was a grandson again, and a son, and a brother. I actually felt like a human again. I didn’t feel like an animal.”

MDOC Director Washington, who oversees not only prisons but also probation and parole throughout the state, concludes, “I think that the benefits are clear. We need to work on mediation instead of conflict, accountability instead of blame and helping families heal.”