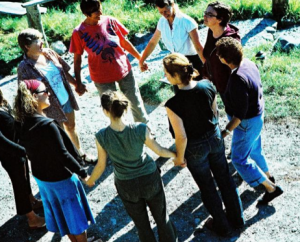 photo by Kris Krug at FlickrAcross the state of Vermont, nearly 50 serious offenders, who are considered high-risk to reoffend, are meeting weekly with small teams of volunteers who have signed on to hold them accountable for their past criminal behavior and to support them to become contributing members of society. These offenders have very little family and community support, and Circles of Accountability, or CoSAs, are formed around the released offenders to help them make the transition back to the community.

For Derek Miodownik, Community and Restorative Justice Executive for Vermont Department of Corrections (DoC), the main issue is how the justice system and corrections can help reinstate the social contract. On the one hand, the community needs to know that it will be safe from further harm. On the other hand, offenders need to understand the benefits to them of becoming rehabilitated citizens.

Circles of Support and Accountability originated in Canada as a way for faith community volunteers to provide ongoing support to sex offenders returning to their communities and not reoffend. The Vermont program is unique because it supports sex- as well as other high-need offenders.

In the CoSA program, a small team of three or four volunteers coordinated by a paid professional meet with a returning offender on a weekly basis for a minimum of one year. “The particular assistance depends upon the needs of the individual core member [offender], but can range from help with creating and following a budget, assistance navigating social service agencies, such as signing up for food stamps, or accessing health care, to practicing interviewing skills and making small talk,” writes Dr. Kathryn Fox of the University of Vermont (p. 29)*. This and other excerpts quoted here come from a qualitative evaluation of 24 CoSAs that Fox released in November 2013 for the Vermont DoC. Fox looked at how and why CoSAs work, and the report includes extensive quotes from interviews with volunteers, coordinators and offenders.

Volunteers for the CoSA program are trained to carry out the program as a restorative process. Fox writes, “Support and accountability can and must be practiced in tandem...” (p. 44). One offender explained: “I wanted [a CoSA team] because I know that I need to be on a short leash, for a while, especially. I need to be accountable.” Another explained, “These are people I can talk to, people I can trust, people I can say, ‘look, this is what I’m thinking – is my thinking wrong or am I thinking correctly?’ And I always know I can trust the answer I get from each one of them. That’s the way they’ve helped me the most" (p. 41).

The CoSA training for volunteers is very explicit. For example, volunteers are trained that there are “no secrets” and that they must adopt a “team approach.” Offenders understand that anything they tell one volunteer will be told to the others, as well as the offender’s probation officer. An offender commented, “People in my family, friends—if [they start] to see signs in me that something’s going on, the whole concept with me now is that he can call [the probation officer] and say, ‘I’m thinking this. Have you got any vibes on this?’ She might call [the CoSA coordinator]. There’s this cross-communication, and it happens rightfully, more so than I thought it would” (p. 36).

Fox found that while CoSAs help offenders learn new skills to succeed outside of prison, the key to successful CoSAs are the relationships formed between volunteer community members and offenders. The most successful teams get together quite frequently outside their formal weekly meetings. Fox found, “The CoSAs that had the strongest relationships, and the greatest investment by the core member, were characterized by deep involvement on the part of the volunteers” (p. 13).

The range of activities can vary widely depending on the people involved. A volunteer explained: “It could be something as simple as getting together for a cup of coffee and a donut. It could be going for a walk in the park. Could be going fishing. Could be splitting wood. … It depends on what they like. …We’ve gotten together and we’ve done community service projects” (p. 34).

Volunteers offer an extraordinary gift of their time. In fact, the voluntary nature of the program seems to fill a gap between the professionals who work with an offender, like probation officers and therapists, and a released prisoner’s other relationships — or lack of positive relationships — out in the world. An offender said:

“...I’m changed and I feel better about myself. I feel more confident that I can do what I need to do and achieve…It’s a lot because of the CoSA, because before, I was like ‘I’m just a nobody, nobody really cares about me.’ You know, ‘forget it.’ …but now I actually can truly see there’s people out there that do care for me and they care for me for who I am” (p. 30-31).

Fox comments, “The mutual obligation that is inherent in the CoSA model creates a blueprint for normal, healthy relationships characterized by investment in one another” (p. 39).

CoSAs sometimes “provide a mechanism by which the core member could get a fundamental human need met, while staying within their rigid conditions of release.” One offender “wanted to visit an ailing relative who lived far away. He was only able to do so because a CoSA volunteer negotiated a safety plan and committed to supervising and driving the core member to the visit. In other cases, core members could attend church services, where children might be present, because a team member accompanied them” (p. 29).

Miodownik praised the study, saying, “We have good reason to believe CoSAs work, but we need the data.” He added that Fox is currently working on a quantitative study to measure the effectiveness of CoSAs. “If it shows it does work this will have major policy implications.”

CoSAs are part of a statewide effort in Vermont that began over two decades ago when the DoC performed a market study to find out how the public felt about the current services they were offering (prisons, probation, etc.). It turned out the public was pretty unhappy with corrections; only 37% approved of their services.

The study went on to determine what the public did want. It emerged that the public wanted involvement in the criminal justice process. They also wanted alternatives to prison that would hold people accountable while repairing the harm done, particularly for low-level crimes.

The Vermont DoC has since partnered with community organizations and municipalities throughout the state to form 20 Community Justice Centers (CJCs). Each CJC is locally-controlled and supported by the work of volunteer community members. No two centers are exactly the same, though they share similar programs. In addition to CoSAs, the CJCs offer services ranging from reparative panels and probation to restorative conferencing, various kinds of mediation, conflict resolution services, community dialogue, victim support and restorative school services.

Miodownik is pleased that the CJCs “increasingly make citizen engagement a bigger part of the mix, from dealing with low-level crime to inmate re-entry into the community.” The State of Vermont is now looking at ways to build upon the success of the CoSA program and offer re-entry services to more offenders, even those whose needs may not be as high.

“We want to have services available across the state to everyone coming out of prison,” said Laura Zeliger, Community and Restorative Justice Director for the Vermont Department of Corrections.

Zeliger said various programs are already being piloted in different CJCs across the state. One service being tried is called “reentry navigation,” with staff or volunteers working with offenders to facilitate reconnection with community. “This could include help with employment, housing and connecting to essential services,” said Zeliger.

Another idea is “restorative reentry panels.” Like CoSAs or reparative boards, a team of trained volunteers meet as a group with an offender on a one-time or short-term basis to explore a variety of questions: How can the returning offender re-engage with family and community? What things might they do to understand what specific harm has been done to victims? How, upon return, can they become contributing members of the community?

“The message of the volunteers is pro-social: ‘We want you back,’ ” said Zeliger. At the same time, they hold offenders accountable for their actions and to not reoffend.

Some centers have also developed processes along the lines of the family group conference called “family reintegration” to bring families into the fold. Zeliger said some offenders returning home “may have been away from or out of the family for a long time. How do they rejoin the family or at least support each other?”

With the CoSAs and other new programs coming online, Vermont is in many ways out on the cutting edge. And with questions being raised across the country about the effectiveness of prison as a deterrent to crime, other jurisdictions will no doubt be taking heed of their example.

Here’s one final quote from Fox’s report in which a CoSA volunteer summarizes the argument for putting time, money and energy into having the community working with reentering offenders: “…ultimately they’re going to be coming out; they’re going to become members of our community. And do we want to have that 58% or so that keep cycling through the system year after year after year after year at $55,000 a year, or do we want to try and break that cycle someplace and turn them into constructive, tax-paying members of society and people that we’d be proud to have for neighbors?” (p. 34).

Listen to a Vermont Public Radio podcast in which Derek Miodownik and Kathryn Fox discussed the CoSA program.