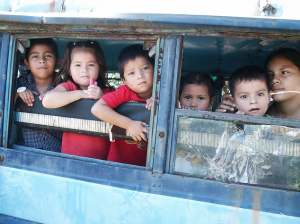 Miguel also directs the Strachan Foundation, a family foundation that supports educational organizations throughout Central America with small grants. Four Strachan Foundation grantees in El Salvador will also receive restorative practices training, including Fe y Alegria, a respected NGO (non-governmental organization), which is part of a federation of 19 NGOs in Latin America, Spain and Chad founded by Jesuits, that works with very poor schools in those areas.

In 2011 Miguel provided introduction to restorative practices and circles trainings to employees of Fe y Alegria. Then in 2012 Miguel facilitated two crucial restorative circles with staff in two different schools that Fe y Allegria works with, the El Rodeo I school in Ahuachapan and Los Laureles school in Acajutla. The schools are located in rural areas characterized by poverty, violence and gang activity. There is a great deal not only of student conflict, but also staff conflict. Yet the restorative circles made an impact, and the teachers found them transformative. According to Miguel, one teacher said afterwards, “This is the first time we’ve been able to have a conversation with one another.”

As a result of these circles, communication among staff began to improve and so did school climate. Miguel has since trained and licensed six staff at Fe y Alegria, who are now able to offer restorative practices training themselves, building local capacity to move the effort forward. They trained staff at the two schools to use restorative practices themselves in classes with students and also with parents.

In one instance, two parents were brought in for a circle meeting with their children and teachers to discuss some problems. Initially the children didn’t speak, but eventually during the circle they opened up and talked about how they felt that their parents were not giving them enough attention and support at home. Miguel relays that this was touching for the parents to hear.

This year – the school year in El Salvador runs from February to November – Fe y Alegria will begin to train a third school, the Adela Calderón school in Tacuba, and also begin to offer restorative conference training.

The impact on these first few schools has been so positive that the Salvadoran Ministry of Education has taken notice. They are negotiating to contract Fe y Alegria to provide restorative practices training to two representatives in each of the 14 Salvadoran states and an additional 30 teachers within the capital region.