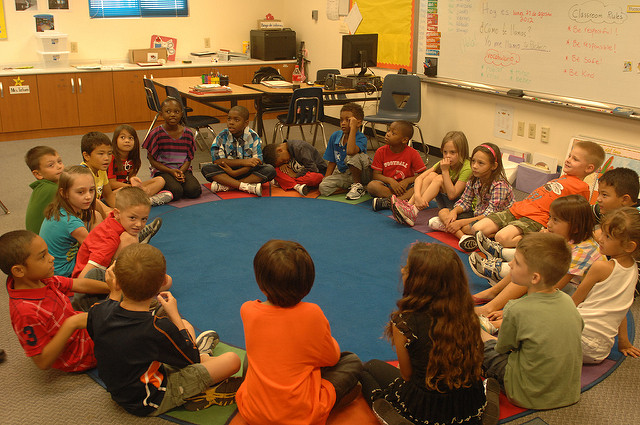 Photo from U.S. Army Garrison Humphreys via Flickr Creative CommonsThree school districts in the southeastern United States have been featured in the press recently for their successful efforts to reduce exclusionary discipline practices and positively influence school climate through restorative practices. The districts, in Chapel Hill, North Carolina, Atlanta, Georgia, and Pinellas County, Florida, are not only seeing significant reductions in discipline issues and absenteeism but also improvements in relationships and academics. In addition, they are employing the practices to address the problem of racial discipline disparities. The IIRP has provided professional development and other support in each of these regions.

For the last year, the IIRP has been very invested in bringing restorative practices to school districts in the South,” says IIRP Director of Continuing Education Keith Hickman. “It is very encouraging and inspiring to see district leadership allocating resources and time, and making a commitment to help their educators develop alternatives to punitive discipline and building healthier relationships with students. There is an enormous opportunity for other schools in the southern region to learn from these districts.”

Here are some excerpts from the articles, along with links to read the full stories.

Matt Goad writes in the The Herald-Sun, Durham, North Carolina:

A method of handling discipline issues that one middle school started experimenting with four years ago has been so successful that all Chapel Hill-Carrboro schools are adopting the system.

McDougle Middle School saw major discipline referrals drop nearly 75 percent the year it started Restorative Practices techniques, which focus on repairing relationships. And the method quickly proved useful not just for discipline but for academics and dealing with disruptions to the school day.

"I think we do talk about the discipline portion of it and how it changes school culture in that regard," said Stephen Rayfield, a language arts teacher and part of the two-person team that brought restorative practices to the school.

"But I would encourage everyone who knows anything about restorative practices not to discount the academic qualities," he continued. "Because it has changed my practice as an educator, as a leader and as a human."

Marlon A. Walker reports in the Atlanta Journal Constitution:

A concerted effort to address student wrongdoing at some DeKalb County schools has resulted in a 50 percent drop in disciplinary actions, and the number of suspensions is down more than 75 percent.

In the year following implementation, some schools saw double-digit drops in chronic absenteeism, where students miss more than 15 days a year.

The biggest change so far at [DeKalb’s] Ronald E. McNair Middle School, said Principal Ronald B. Mitchell, is that students are making better decisions even when they don’t think they’re being watched. … "I’ve got kids doing the right thing because it’s the right thing to do, and not because it’s a rule. That rubs off on other kids, too."

In 2015, a Tampa Bay Times investigation found that black students in Pinellas were given out-of-school suspensions at four times the rate of other children. That year, Pinellas’ four area superintendents attended a conference called "Rethink Discipline."

Restorative practices were "one of the primary tools and initiatives that they had identified as having great potential for reducing that disparity," said area superintendent Bob Poth. "And at the same time creating positive culture in school as a whole."

In 2016, four schools piloted restorative practices. One was Gibbs High in St. Petersburg, which had the highest discipline disparity rate in the county, with black students more than seven times as likely as other students to be suspended out of school.

Principal Reuben Hepburn said he held restorative practice circles in the summer of 2016 with incoming freshmen who had behavioral issues in middle school. … This year, he has asked his teachers to incorporate restorative circles in their classrooms.

"When it comes to addressing conflict or addressing issues between students, it’s something that’s going to continue because it’s working," he said.