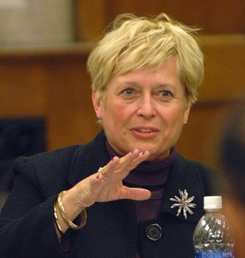 Janine P. Geske, retired Justice of the Wisconsin Supreme Court and Distinguished Professor of Law at Marquette University Law School, recently spent time as a Visiting Professor in Restorative Justice at Catholic University of Leuven, Belgium. She has written two blog posts for Wisconsin Restorative Justice Coalition inspired by her time abroad. In the first piece, she discusses the framework for national implementation of restorative justice (mostly mediation) processes in Belgium. In the second second, she suggests ways American researchers and advocates could learn from their European colleagues. (Thanks to IIRP's Wisconsin affiliate, Patrice Vossekuil, for forwarding the link.)

I have the privilege of serving as a visiting professor at the Catholic University of Leuven, Belgium this semester. The university was founded in 1425, making it the oldest existing Catholic university in the world. There are 40,000 students here, about 6000 of them from other countries. Within the law school, the Criminology Institute focuses on restorative justice, penology and victimology, both academically and through research projects. It offers a very significant PhD program and conducts incredible research for institutions and governments, including the European Union. The headquarters for the European Union for Restorative Justice (http://www.euforumrj.org/) is also located here. The European Forum also conducts research, serves as an advocacy role for legislative changes and provides continuing education in restorative justice.

Most Americans who work in the restorative justice field can learn a great deal about the development of restorative justice in Belgium, as well as other European countries. The Belgian federal government funds much of this work in a variety of criminal justice settings. Since 1994, federal regulations have governed what is called “penal mediation,” which is facilitated through prosecutors’ offices. Those mediations occur in the midst of the criminal court proceedings and can impact how the prosecutor decides to proceed. A liaison magistrate in the prosecutor’s office selects them. In order for an offender to qualify for mediation he or she must be over 18 years of age and has to accept responsibility of the crime, the maximum sentence for the offense does not exceed 2 years; the offender is willing to pay costs, and is willing to cooperate in the mediation. Any statements made by the offender in mediation would not generally be admissible if the matter goes to court. Although there are critics of the penal mediation system because it is not managed through an independent nonprofit organization (as are the other types of criminal mediation/dialogue), it is significant that it is built into Belgium’s criminal procedure law.

Since 2001, Belgium has offered victim-offender mediation after offenders have been incarcerated. These dialogues are very similar to the ones that the Marquette Restorative Justice initiative and the University of Wisconsin Law School projects provide in crimes of severe violence. One of the fundamental differences is that here the offender can initiate the process. The professional mediators, who work for nonprofit criminal mediation agencies, will contact a victim to determine whether he or she has any interest in meeting with an offender who has made a request. Otherwise the processes are very similar to the ones we utilize.

In 2005, the federal law provided that every person who has “a direct interest” can request mediation at any stage of the criminal procedure. (Art. 553, sex. 2 of the Belgian Code of Criminal Procedure.) Like most places, any mediation that occurs needs to be voluntarily agreed to by all parties. These mediations, although funded by the government, are overseen and facilitated by two private, nonprofit organizations (Suggnome and Mediante) and supervised by a federal Commission on Mediation. There are no specific regulations on how and when the mediation should occur. It does define mediation as follows:

“Mediation is a process that allows people involved in a conflict, if they agree voluntarily, to actively participate and in full confidentiality in resolving the difficulties that arise from a criminal offense, with the help of a neutral third person and based upon a certain methodology. The goal of the mediation is to facilitate communication and to help parties to, by themselves come to an agreement concerning conciliation and restoration.”

The law does allow participation by other affected persons, such as partners or friends of the offender or victim who have been impacted by the offense. This mediation is intended to occur parallel to, but separately from the criminal process itself.  There may or may not be information shared with the prosecutor or justice system after a mediation depending on what the parties agree to.

Finally, in 2006 the Belgian Youth Protection Act recognized and encouraged mediation and sentencing circles in juvenile cases.  In 2009, over 4000 juveniles were referred for mediation, 37% of them went through mediation (often indirect dialogue through the mediator) and most of them ended in agreements.

Of course, despite much legislative recognition, many in the system have not “bought into” the restorative approach of addressing the harm caused by crime. As in the United States, many in the criminal justice system remain skeptical using restorative practices after a crime.

There are two other types of mediation occurring in different parts of the country. One is called “mediation for redress” and the other “Police mediation.” The mediation for redress program occurs at sentencing and focus on minor property and violent offenses with clear financial or material damages. Police mediation occurs in the police stations, before referral to the prosecutor’s office. The University of Leuven has provided incredible research support analyzing the implementation and outcomes of these various processes in Belgium as well as in the greater European community. When restorative justice processes are done well, the outcomes are almost always favorable.

Just a few of the university’s recent research projects included:

To spend a semester as part of a highly respected academic community studying the global impact of restorative justice programs in a myriad of settings has been sheer joy for me.  I look forward to returning to Marquette Law School next semester with a newly ignited excitement of our work with the Restorative Justice Initiative and the possibilities for things to come.

Organizations such as the WRJC should consider partnering with other groups (both victims’ and offenders’ organizations as well as governmental and nonprofit agencies and universities) to gather data on current restorative justice projects, selecting a research and analysis model, and then advocating for legislative enactments that recognize and support justice processes as part of the solution in addressing the harm caused by crime.

Great care has to be taken by those of us in the field, not to lose the independence and value driven processes that exist, just to have them become diluted to the point that the fundamental principles of restorative justice are lost. Those of us who do this work fully understand that there are many challenges in effectively integrating restorative justice approaches into our current justice system. We must remain mindful that by institutionalizing restorative justice, there is always the risk that it would lose its victim-centered nature. Bringing together all the stakeholders in the justice system to begin a dialogue and planning strategy on how best to create and implement useful restorative justice projects is a good starting point. All the various disciplines need to be involved.

Although there are some excellent research projects that have been conducted by a number of American scholars including Professors Mark Umbreit, Marilyn Armour and Gordon Bazemore, I believe that we really do continue to lack the substantial empirical data that is needed to convince politicians and other decision-makers of the transformational benefits of restorative justice. We all know, anecdotally, of many projects that had great successful outcomes and then were shut down because of lack of funds. Much of the historical data from that work is lost forever. I want to encourage organizations such as the WRJC and others to work with academic researchers so that, at the minimum, ongoing restorative justice projects can utilize evaluation forms, questionnaires, interviews, etc. that can be used to gather information that can later be analyzed. It is through the substantial research done at Leuven and other academic and professional institutions that restorative justice has gained the creditability and stature it has in public policy and legislative debates in many European countries. We ought to be doing likewise in our professional organization.