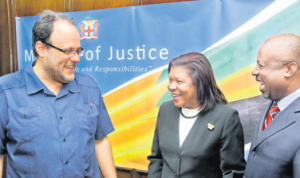 (From left) Justice Minister Mark Golding, Chief Justice Zaila McCalla, and Robert Rainford, permanent secretary in the Ministry of Justice, share a light moment prior to Thursday’s launch of Restorative Justice Week at the ministry in Kingston. (Photo: Lionel Rookwood)This week – February 5 through 11 – Jamaica once again celebrates Restorative Justice Week on the theme of "One People, One Spirit, One Justice." This is the 5th year Jamaica has hosted such a week of events related to restorative justice, and this year it coincides with Jamaica's celebration of its 50th year of independence.

According to this article from the Jamaica Observer, Justice Minister Mark Golding said:

As it stands, “our justice system defines and treats crime as an offence against the State and its laws.” This definition, the minister pointed out, was geared at attributing blame and punishing the offender, not solving problems and restoring broken relationships. ...

According to Golding, for the justice system to meet the aspirations of the people, the people must be placed at the centre. He said that as Jamaica celebrates Restorative Justice Week a number of activities would be unfolding which would be geared towards heightening public awareness and understanding the roles and functions of the justice ministry.

In 2007 I reported in an eForum article, "Healing in Our Land: Jamaica Hosts International Conference on Restorative Justice," about IIRP's involvement in the beginning phases of Jamaica's restorative journey. Since then Jamaica has taken many steps to institute a National Restorative Justice Policy. In 2007-2008 Jennifer Llewellyn, Director of Nova Scotia Restorative Justice Community Research Alliance (with whom IIRP partnered to put on its 14th International Conference in Halifax last summer) served as a Senior Consultant for the United Nations Development Program assisting with the formulation of this policy. Currently, Audrey Barrett, a former student of Llewellyn's serves as the National Technical Advisor on Restorative Justice in the Jamaican Ministry of Justice. This year's events include the opening of four neighborhood restorative justice centers. Barrett writes:

In 2010 we [got] some training in with IIRP and I began to do a fair bit of building of engagement and capacity at the community level.  We put in place committees in our 4 pilot communities that were comprised of some who had been trained by IIRP, as well as local NGO's (Non-Governmental Organizations), CBO's (Community Based Organizations), government agency reps, Justices of the Peace, Ministers of Religion, teachers, etc.  These groups then started to conduct community sensitizations/public eduction on restorative justice concepts and principles. At the same time I began conducting further training in the communities with our volunteers to build their understanding of the principles and values of restorative justice.  I did a series of 7 workshops that looked at: 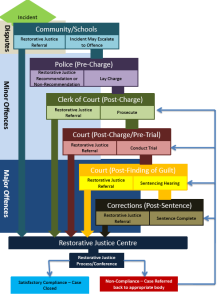 The other thing that was happening at this time was the drafting of the National Restorative Justice Policy.  I worked with one of our special project consultants within the Ministry of Justice to draft the policy.  It is largely based on the Nova Scotia model of restorative justice as a responsive mechanism within the justice system (with the restorative processes looking a lot like Nova Scotia too).  It intersects with the traditional justice system at 5 points and also includes an entry point for community and school disputes. (See graphic)

So now it seems after much laying of groundwork final approval by the cabinet is awaited. Barrett also credits the work of Miss Ruth Carey, Director of Implementation, Restorative and Child Justice Reform Unit since September, 2011. Barrett says, "She is an amazing young woman who has really moved the project forward since taking up her post... [W]e also have a training coordinator and 2 Field Officers in the unit.  We expect to hire an additional 2 Field Officers (1 for each pilot community) as well as an administrative assistant. We're also hoping to roll out to an additional 6 communities before the end of 2013.  We have funding from the Inter-American Development Bank for this roll out." Barrett expects that even before the official go ahead for institutional RJ happens, the neighborhood centers will begin to "deal with community disputes before they errupt into criminal offences.  There are many of these, and it would be good practice for our facilitators."