An article titled "The Use of Restorative Practices as a Strategy for Closing the School-to-Prison Pipeline" by IIRP Assistant Professor and Director of Continuing Education Dr. John Bailie has just been published in Race, Law, and Justice: Strategies for Closing the School-to-Prison Pipeline, a series of articles as a follow-up to a symposium held in February 2013 by the District Attorney's office of Kings County, New York, and Medgar Evers College, City University of New York. Bailie's piece is printed below. The entire journal, which includes an array of articles looking at many relevant issues and perspectives on race, zero tolerance and alternatives like restorative justice, may be downloaded for free. 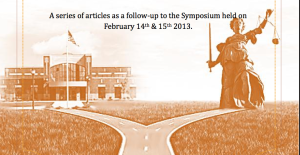 Zero-tolerance policies implemented in schools over the last two decades have been shown to be ineffective in reducing violence and serious misbehavior, as has been shown in numerous studies, including the American Psychological Association’s “Zero Tolerance Task Force” 2008 evidentiary 10–year review.

The only consistently demonstrated outcome for students receiving these sanctions has been more and harsher sanctions in the future, which in the worst cases lead to incarceration, according to a 2010 report, “Test, punish and push out: how zero tolerance and high-stakes testing funnel youth in the School-to-Prison Pipeline,” from the Washington D.C.-based civil rights research and advocacy group, the Advancement Project.

This sanctioning process has been significantly biased against students of lower socioeconomic status and minorities, especially African American and Hispanic youth, who tend to receive harsher and more punitive punishments then their non-minority peers for the same or similar behaviors.

In the 2011 “Race Is Not Neutral: A National Investigation of African American and Latino Disproportionality in School Discipline,” leading national expert Dr. Russell J. Skiba of Indiana University reports that African American students are more than three and a half times as likely to be referred to the office for problem behavior as their White peers and that African American and Latino students are more likely than their White peers to receive expulsion or out-of-school suspension as consequences for the same or similar behavior.

Proliferation of zero-tolerance policies also has contributed to the creation of highly punitive school cultures. These have increasingly integrated law enforcement strategies such as electronic surveillance, increased police presence and a double-jeopardy effect in which students are much more likely to receive criminal charges in addition to school discipline sanctions, thereby feeding the “school-to-prison pipeline.”

Harvard Law School’s Charles Hamilton Houston Institute for Race and Justice 2010 policy brief, “First do no harm: how educators and police can work together more effectively to preserve school safety and protect vulnerable students,” reports that the number of police officers placed permanently in school buildings increased from an estimated 9,446 in 1972 to a current presence of approximately 17,000 nationally. The brief states that law enforcement officers are stepping in to handle school discipline issues, and that arrests in school are for minor incidents like “disturbance of the peace” or “disruptive conduct,” not dangerous or violent crimes.

Thankfully, there has been a strong movement in the last decade for data-driven school policy development. Harvard Law School’s “First do no harm…” is one of many policy briefs calling for interventions and programs to replace zero tolerance with those that aim to address root causes of student misbehaviors.

One consequence of the focus on data is the growing acceptance that zero-tolerance policies have failed to create safer schools. Instead, they cause lasting, and in many cases, generational harm to children and communities through increased tracking of youth into the criminal justice system at increasingly earlier ages.

These policies have also served to distance children, families and communities from schools, often one of the few social institutions poised to serve as a powerful normative and pro-social force, especially in communities with fractured families and stressed social bonds.

The data demonstrate that social-connectedness and strong relationships are the key factors in reducing school violence, misbehavior, victimization and a wide range of other risk factors for children. In Denver Public Schools, programs emphasizing these features resulted in a 68% reduction in police tickets and a 40% reduction in out-of-school suspensions (as reported in the Advancement Project’s 2005 “Education On Lockdown: The Schoolhouse To Jailhouse Track”). The same is true of West Philadelphia High School, which saw a 50% drop in suspensions and a 52% decrease in violent acts and serious incidents, as Director of Research for the Council of the Great City Schools Sharon Lewis reported in the 2009 report, “Improving School Climate: Findings from Schools Implementing Restorative Practices.”

All human beings want to belong and be close to others. This need is so strong that youth will even seek to bond with toxic, violent or harmful subcultures if they do not bond to a positive and healthy community.

The question is: How can schools capitalize on this need and prevent violence and misbehavior by making it more likely that students will want to bond with the school and its educators?

The challenge is that most schools and school districts offer little training, education and support for staff to develop these skills and implement them with youth and families.

That’s why the International Institute for Restorative Practices (IIRP) developed the Safer Saner Schools Whole-School Change Program. This program uses “restorative practices” – built around the hypothesis that individuals function best when those in positions of authority do things with them rather than to them or for them. The program teaches educators to proactively and strategically build effective relationships with youth — a teachable skill — and then focus on those relationships when responding to harm. Instead of traditional sanctions, which only focus on rules that were broken and impersonal punishments, restorative responses make students confront the real, powerful and personal impact of their behavior.

The IIRP is implementing this program in schools in major urban districts such as New York, Detroit, Philadelphia, Baltimore and San Francisco. The IIRP is also partnering with the New York City Juvenile probation department to train all of their probation officers to use restorative practices informally with their youth and families.

School discipline statistics bear out the practices’ effectiveness. To cite one example (as reported in the Allentown, Pennsylvania, Morning Call), after implementing restorative practices, Freedom and Liberty, large urban high schools, in Bethlehem, Pennsylvania, saw suspensions, fights, bullying and assaults drop during the 2011-12 school year, a reversal of 2009-10 and 2010-11, when infractions increased. The most serious offenses — assaulting a staffer, having a weapon and habitually breaking the rules, decreased the most: 32 percent from the year before.

What students learn in school they bring with them into the world. Kids at Liberty and Freedom high schools are taking restorative practices to the streets.

Two boys were about to have a serious fight on the basketball court at the Boys & Girls Clubs, in South Bethlehem, Pennsylvania. Adults in the gym feared the worst, as many of these boys have gang affiliations. As the other boys gathered around to take sides, one boy on the verge of brawling suddenly stopped and said, “Look, I don’t want to fight. I don’t like what you said; you hurt my feelings.” Then the other boy said, “You’re right. I’m sorry. I didn’t mean to hurt your feelings. Let’s not do this.” The fight simply fizzled.

These boys were employing the restorative practices they had learned in school: how to be compassionate and empathetic, how to be in touch with their feelings and the feelings of others. They weren’t afraid of being seen as a wimp or less of a man. There was nobody standing over them telling them to do it. Restorative practices saved these kids from who-knows-what kind of injuries, police involvement or juvenile records (Mirsky, 2013).

The spread of this program is coinciding with the beginning of a formal rollback of failed zero-tolerance policies. In June 2012, the Michigan Department of Education formally revoked all zero tolerance policies and recommended they be replaced with "proven alternative behavior management strategies like restorative practices." Similar measures are being undertaken in Maryland and Georgia. This fall New York City revised its disciplinary code to reduce punishments and keep students in the classroom.

How to stop the school-to-prison pipeline? The answer is simple, because it works: restorative practices. Spreading from schools to the streets, the practices can help build a safer, saner world.