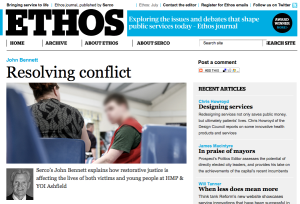 Here are two passages excerpted from a piece in Ethos Journal by John Bennet, Restorative Justice Advisor at a youth detention facility in the UK. The first passage focuses on the use of youth meeting their victims in the prison, with a very high rate of success from the victim's point of view. These sound like victim offender mediation meetings, rather than full blown conferences, but they do seem to include the victim's, if not the offender's, family as well. The second passage describes use of what I imagine to be a more informal process internally, between youth in conflict or a youth and teacher.

Youth Offenders Meet Victims and Families While in Prison

The biggest but most rewarding challenge for Ashfield is to encourage Youth Offending Teams (YOT) to hold RJ meetings at the prison. These take place between external victims and the young people in Ashfield who committed the crime. For this type of meeting, a facilitator from the relevant YOT approaches the victim to ascertain if they might be open to the idea of a face-to-face meeting with the perpetrator/s of the crime that affected them. The RJ co-ordinator in Ashfield then approaches the young person concerned, and risk assessments are undertaken before the meeting takes place. We have held 16 of these meetings to date, for crimes ranging from arson and assault to car crime and burglary.

In the vast majority of cases – 98% – there has been a successful outcome for the victim and family, enabling them to gain closure on the incident. A successful outcome is defined by two things: forgiveness on the part of the victim, who may even offer encouragement to help the young person give up his offending behaviour; and remorse on the part of the young person. Young people at Ashfield are frequently surprised and saddened when they hear the full impact that their offence has had on a family, and reach a greater understanding of the ripple effect of crime as a consequence of the meeting. The government has pushed this year to ensure that members of Youth Offending Teams contact all victims to encourage and support them to confront the perpetrators of the crime via restorative justice. This will hopefully lead to an increase in these types of meetings.

Restorative justice is also used to solve internal conflict. For example, if two young people have a fight or disagreement, they are encouraged to sit down together with a facilitator and talk through their point of view to try to bring closure on the incident. We have generally found that once the young people agree the matter is over and shake hands on the agreement, the issues they had with the other young person are over for good. We have held over 900 meetings of this type in the past few years, which means that at least 1,800 young people have used the RJ system to resolve issues, with a success rate of over 94%. This means that once the young people have agreed to let the matter drop and shaken hands on the agreement, there is rarely any more conflict between them.

Occasionally, some form of conflict may arise between a member of staff and a young person. Both sides are encouraged to take part in an RJ meeting to explore the issues between them. These meetings have also been very successful, particularly between teachers and pupils, where the young person will often talk about issues outside of the classroom that have been affecting their behaviour inside it. The teacher, while accepting the young person’s explanation, will explain their need to control the class so all can learn in a friendly environment, and perhaps suggest ways in which the young person could better manage a similar situation next time to avoid direct conflict. We have held over 95 of these meetings with a success rate of over 97%, meaning that once the problems have been explored and apologies have been accepted, both sides put the issues behind them and start again. Again, these agreements are largely adhered to.