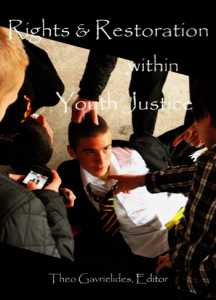 If policymakers have the objective of bettering justice responses for young people, then Theo Gavrielides‟ (2012) edited volume, Rights & Restoration within Youth Justice is a must read. It makes an important contribution to youth justice. 1) It bridges a growing divide between evidence-based research and practice; 2) It promotes a participatory framework for doing democracy that necessitates youth voice; 3) It allows for complex issues – serious crimes, like domestic violence – to be responded to in complex – imaginative yet careful – ways. Gavrielides does all this by judiciously connecting the disciplines of restorative justice and human rights. The key question of the book is: how can these two fields work collaboratively to accomplish the above goal? Contributors are a blend of scholars, policymakers, and practitioners.

This book review will do two things. One, it will give a brief synopsis of the textual themes. Two, it will highlight how this book can better justice for youth: namely, in the area of policy.

Rights and Restoration within Youth Justice is divided into three parts. The first brings human rights and restorative justice into dialogue. For example, in chapter 5, Colin Harvey claims that there are a lot of similarities between the principles of human rights and restorative justice (p.80). Especially when human rights remains focused on upholding all human dignity, rather than being an imposition of one culture's values over another's (p.80). In chapter 3, Lode Walgrave articulates how this might work with young offenders. He suggests that restorative justice is a democratic force, opposing a "lock-em up and throw away the key” attitude that he defines as “penal populism”; instead it means young offenders take responsibility for their crimes in a serious, yet constructive manner (p.130). Together restorative justice and human rights offer parallel principles for responding to harm in a way that honours the humanity of those affected by crime, victim and offender alike.

Part two describes specific examples of youth justice, where human rights and restorative justice have partnered. Studies from the United Kingdom, to Austria, to Greece, to Turkey, and beyond, highlight the need for justice that includes both. In one particularly poignant chapter, “Human Rights-Based Restorative Justice for Violence against Young Women: Experiences from Greece and the UK”, Theo Gavrielides and Vasso Artinopoulou rightly argue that justice responses to violence against women have been limited at best (p.178). They cautiously wonder about the role of restorative justice. But, only with proper consideration of human rights safeguards, like ones articulated in the United Nations Declaration of Human Rights – fairness, respect, equality, and dignity (p193). Violence against women is resistant to change, requiring multifaceted interventions. Gavrielidies' and Artinopoulou's proposal is worth further exploration.

The final section of the text is a collection of twenty-three case studies. Each one tells a story about practitioners working to do restorative justice within the bounds of human rights. From crimes against people (ie. hate and rape) to ones that harm communities (ie. racism and vandalism) from property crimes (ie. theft) to institutional conflicts (ie. restorative justice in prisons, and schools), the case studies tackle serious issues that affect all societies. By putting a practical face to the research of the first two sections, the learning of the reader is enriched. It demonstrates what is possible. Lauren Abramson, in Case Study 20, describes an instance of male sexual harassment of a female, in an inner city Baltimore school. In a few, short paragraphs she explains how restorative justice conferencing allows a victim, and family members, to explain the harmful impact of crime, while making an offender directly accountable (p.468). The encounter challenges root causes – gender roles – while providing a meaningful outcome for all participants (p.469). When crime is dealt with through the lenses of human rights and restorative justice, communities can become safer. The justice needs of victims can be met.

Rights and Restoration within Youth Justice navigates a challenging domain with clarity and elegance. The book does not unnecessarily pile on more words to the growing literatures of restorative justice and human rights. It does, however, sufficiently offer a practical way forward, especially at the policy level: a robust – evidence-based – signpost for pointing communities toward a participatory framework for doing youth justice. In his concluding remarks, Gavrielides suggests that communities can do a better job of giving youth a voice in this. Democracy, he says, “is predicated on the idea that every individual...should have an equal opportunity (not an obligation) to have a say in decisions about their country's future and the formation of policies, legislation and practices that affect them” (p. 402). Ultimately, the book is well researched, well written, and deserving of the attention of academics, practitioners, and policy makers, interested in doing youth justice better.