Courageous Communities: Circles of Support and Accountability with Individuals Who Have Committed Sexual Offenses 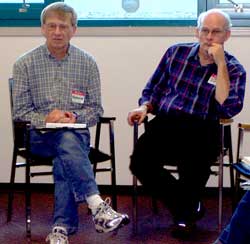 CoSA volunteers Bernie Martens (left) and Wayne Northey participate in a training event in Abbotsford, British Columbia, Canada.“Robert” was released from a Canadian penitentiary in 1994. He had a very long history of assaulting little boys. He was fearsome. He embodied the stereotypical image of the ham-fisted monster hiding behind telephone poles, waiting to snatch an unsuspecting child. The research tells us few such offenders lurk in our midst, but Robert (not his real name) was one of those few. The sentencing court had not declared Robert a dangerous offender. Had it done so, he would have remained in prison indefinitely. Soon, however, he was to be released, and everyone who knew him dreaded the day.

Harry Nigh, a Mennonite pastor in Hamilton, Ontario, a medium-sized city close to Toronto, took a call from a prison psychologist who was working with Robert leading up to his release. Robert had been to Harry’s “Welcome Inn” church in Hamilton before he was arrested and had identified Harry as a possible community support when he was released.

Harry could scarcely remember Robert. What he did remember made him uncomfortable. Nevertheless, guided by his faith and the Christian ideals of unconditional love and forgiveness—tempered with foreboding—Harry gathered some members of his congregation and drove for two hours to the gates of the prison from which Robert was to be released and brought him home to Hamilton.

From this one act—mirroring the “radical hospitality” espoused by the Christian Gospels—sprang what has since become a world-renowned project called Circles of Support and Accountability (CoSA). What began in a small church basement among a group of the faithful has grown and been embraced by faith and non-faith groups within and beyond North America. Today there is a CoSA project in every major city in Canada. In Great Britain, the Home Office, in cooperation with the Quaker Peace and Social Witness Friends House, mounted a pilot project in the Thames Valley near London based on the Canadian model. That project has just released a report following its third successful year of operation. (To download this report, please click here.)

In the days that followed Robert’s release, both he and the volunteers from the church were the subject of every imaginable expression of community fear and hatred. They became weekly victims of threats, and police scrutinized their every move. But the police were witnessing something they had never seen before. Robert was becoming part of a small community, and he was being looked after. Indeed, his behavior was not only being monitored more closely than any police service could achieve; he was also being held to account for himself. And for perhaps the first time in his life he was making friends—real friends.

One day after church, a neighbor became upset with Robert’s presence in the neighborhood and started yelling threats. Harry ended up inviting him to come and meet Robert. Once the two had met the threats subsided, and the neighbor left saying he would leave Robert alone so long as he kept his part of the bargain—no more victims. Robert has now been in the community for more than 11 years, with no subsequent offending behavior.

In Vancouver, British Columbia, 10 years after the first (proto-)CoSA meeting, community volunteer John Maybe was participating in an on-camera interview with a Japanese journalist. The Japanese were quite interested in how Canada worked with its sex offenders, particularly the concept of Circles of Support and Accountability (CoSA). John had volunteered with the Vancouver chapter of CoSA a year earlier.

“What prompted you to volunteer to work with a sex offender?” asked the journalist. Maybe replied, “I used to be like everyone else. I hated these guys. I thought they were filthy. Then I met one. I realized pretty quickly that he’s just like me. He’s a human being just like I am. Once I understood that, I could not turn my back on him. I hate what he’s done. But if he’s willing to do his part, I’m willing to be there to help him. I don’t want there to be any more victims.”

In Calgary, a CoSA group run by the Mennonite Central Committee of Alberta held an unusual meeting. The wife of a Core Member (what former offenders are called in CoSA) was struggling with a decision: Should she allow her husband to come home, or should she insist that he stay away? He had sexually abused several of their daughters and their daughter’s friends when they were children. The family was divided. One of the daughters, taking time away from studying for her university midterms, attended the meeting with her mother. Her father—the Core Member—was there, too.

The project coordinator and the volunteers arranged a potluck supper and invited two other women to attend as guests. These women had struggled through this dilemma themselves. One had told her husband to go away; the other had let him come home, with conditions. The meeting was an attempt to provide support and assistance to the Core Member’s family and to support the Core Member in his attempt to be accountable.

At one point during supper, someone asked what victims needed. While the two guests were eloquent in their responses, it was one of the volunteers who seized the group with her story, one she had not shared before. Speaking directly to the Core Member, his wife, and their daughter, she told of her struggles to survive as an adult following the sexual assault she had suffered as a child at the hands of her father.

Hearing this, the daughter suddenly found a way to speak openly to her father of her pain, telling him how torn she often felt. Then she told her mother how she both loved and hated her and how she was lost in those feelings. From a restorative justice perspective, CoSA has sometimes been challenged for its focus on offenders. Practitioners of restorative justice have correctly asked, “Where are the victims in all of this?” In fact the prime imperative of CoSA is victims. Community volunteers are recruited, screened and carefully trained to work with former sex offenders so that the CoSA slogan, “No More Victims,” will become a reality. When notions of community such as Circles of Support and Accountability are founded on caring deeply for one another, despite everything, incredibly powerful things happen that build up rather than tear down.

Today all “correctional” practices are subject to scrutiny under the guise of the “what works?” and “evidence-based practice” mantras. CoSA is no different, and we have had to underscore our good deeds in the community with empirical results. (This research will soon be available at the CoSA program website of the Correctional Service of Canada: http://www.csc-scc.gc.ca/text/pblct/lt-en/2006/31-3/7-eng.shtml.)

To that end, a two-part research project was initiated to follow the pilot project in South-Central Ontario (centered in Toronto). First, a “process evaluation” gathered data regarding the impact of circles on participants, their families and, most important, the community at large. It also evaluated the confidence levels of the professional community. Second, a quantitative evaluation examined recidivism rates of offenders who were in a CoSA against a control group of offenders who were the same on a battery of measures except that they did not have a circle.

This recently released research found considerable increases in community functioning for Core Members, while reoffending dramatically decreased (by 70 percent or more) in comparison to both actuarial projections and the matched comparison group mentioned above. Anecdotal evidence from other Canadian communities tends to support this portion of the research, as do project evaluations from Great Britain.

In the process evaluation, the majority of CoSA volunteers said they were motivated by a “need to be involved” in their community, and more than three-quarters felt a sense of teamwork in their circles work.

Among members of the community at large (non-volunteers), 100 percent of respondents reported they would feel more positively about a former offender living in their community if they knew he was part of a circle. Corroborating evidence from British Columbia found that 75 percent of respondents attending a community forum indicated their overall fear and anxiety would be reduced if they knew a released sex offender was part of a CoSA.

For their part, Core Members reported they felt less nervous, afraid and angry as a result of their experience in a CoSA. They also reported that they were more realistic in their perspectives, more confident, felt more accepted and experienced pride for not reoffending. Without their circle, Core Members said they would have had difficulty adjusting and in relationships with others, become isolated and lonely, or turned to drugs or alcohol as coping strategies, and finally, they would likely have reoffended.

Ken, a Core Member from Toronto, said, “These are my best friends. You can’t share what we have shared and not be friends. Without them, I would have been back in jail by now.” Ken remains offense-free in his eighth year with his CoSA. One of the volunteers in Ken’s CoSA is a police officer.

As part of their model, the Toronto pilot project solicited the assistance of the professional community at various points in the process of building its project. Among these professionals, two-thirds were specifically asked to provide support and expertise to circle Core Members and volunteers. While they noted some concerns around availability of community-based treatment, circle structure and boundary issues, they also reported that they have been impressed by the level of support, increased safety measures and increased offender responsibility they observed among Core Members in the circles.

Harry Nigh’s ad hoc project has become an internationally viable alternative to fear and loathing of sex offenders in the community. Indeed, a significant group of offenders, formerly thought to be incapable of anything less than continued atrocity, have become part of something greater. Sex offending is a problem born of the community. It is only fitting that its solution also be born of the community. However, the good deeds of our volunteers have exposed a dichotomy. Governments around the world continue to enact legislation to contain and limit participation in the community by former offenders. Concurrently, the courageous communities involved in CoSA have decided to embrace former offenders as a means to engage the risk-management process. Accomplishing the “No More Victims” goal will require a radical shift in perspective—one that will take great courage—but one that has enormous potential for both prevention and reparation. CoSA is a restorative justice practice that has at its core the fundamental goal of transforming communities. Their ability to support offenders, help them live responsible, accountable lives, and bring a measure of healing and reparation to families and communities, make it a powerful “best practice” model for communities seeking to embody the transforming promise of restorative justice.