Restorative justice changing the face of juvenile justice across Idaho 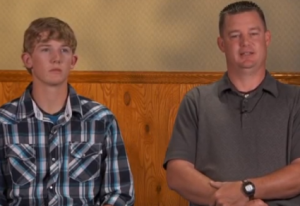 Cody Gates and his father, Gordy Gates, discuss the impact of a restorative conference after Cody set off fireworks into a crowd, from a video presentation sponsored by Easter Seals / Goodwill of the Northwest (watch below).There’s a restorative revolution taking place across the U.S. state of Idaho, originating in the field of juvenile justice and radiating out to schools and communities. It began a few years ago and is being driven by a mostly rural eight-county district in south central Idaho.

Judge Mark Ingram, a magistrate court judge for the Fifth Judicial District in Idaho, was exposed to restorative practices while practicing law 12 years ago. He worked with various kinds of mediation, beginning with personal injury but leaning more toward child custody and victim-offender mediation because they were “more relational,” he said. When he became a judge in his hometown of Shoshone, the Lincoln County seat, with a population of about 1,500, he began to look for ways to help resolve tensions in the community between old-time farmers and new transplants. A Community Justice Coalition with a restorative mission organized large community meetings to foster helpful discussions. But Ingram continued to struggle with the question of how to bring a restorative spirit into the court system in a practical way.

About four years ago, Ingram and Bev Ashton, the District 5 Liaison with the Idaho Department of Juvenile Corrections, while looking for answers to that question, discovered the IIRP. Ashton and three probation officers went to Bethlehem, Pennsylvania, to be trained as restorative conference facilitators. Ashton said, “We really liked restorative conferencing because it is of particular benefit to victims.” Upon returning home, they immediately began to put conferencing into practice. 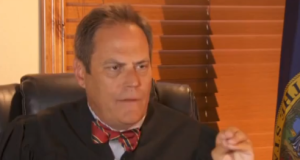 Judge Mark Ingram, a magistrate court judge for the Fifth Judicial District in Idaho, is working to bring restorative justice to the juvenile justice system in his jurisdiction and across the state.Ingram said that at first they thought they would use conferences for minor crimes. But what they’ve found is that full-scale restorative conferences work best for the really serious, upsetting crimes. Here’s one story Ingram told:

I had committed one kid to the Department of Juvenile Corrections after he burgled a neighbor’s place. He ransacked the house, took $12,000 to $13,000 worth of electronics, and handled the little girl’s under garments. While awaiting sentencing, he broke into a local Walmart and stole or damaged tens of thousands worth of property. Then he shot a fire extinguisher into the HVAC system, and two Walmart associates were taken to the hospital for breathing problems.

Let’s face it, some people are genuinely anti-social, and we pegged him that way. But we knew he was coming home, so we had a conference with the Walmart employees and the people across the street that he had burgled. Everyone unloaded on him. The kid responded by saying how sorry he was. Darrin, the father across the street said, “Look, I did hard time, and you’re like every other con. I don’t believe you for a minute. You’ve got to show me that you are going to do the things you say, that you’ll find a job and pay your restitution.” This guy just nailed him.

Then his wife, Sandra, explained that she had been sleeping with a gun under her pillow, afraid the kid was going to come back. Darrin also said he felt emasculated because he felt like he wasn’t protecting his family. Both of them had been taking their feelings out on the kid’s mother by doing things like backing into her car. Darrin said, “I want you to come to our house for a barbecue. Not because I like you, but so my kids can meet you and know that you are not the monster they have in their minds.”

Six months later I check in with the kid to see how things were going with the neighbors. He said, “Fine. Darrin’s in North Dakota working in the oil fields. Sandra works at the hospital at night. Now I’m the babysitter.” I said, “How did that happen?” He said, “She asked me to do it. She said, ‘I’ve got to work now. Come on in. You already know where everything is.’ ” Since then, Darrin took the kid to North Dakota to work with him in the oil fields. He’s bringing home a lot of money and paying off his restitution.

According to Ashton, conferences are being conducted in the district when referred by juvenile court, schools, probation and police. The stories are many and powerful. A girl who brought prescription drugs from home to school and passed them out was charged with three felonies. But she was able to return to school, and the charges were reduced on the basis of a successful conference where a community member who was a family friend came up with a solution to check-in with the girl and her family on a regular basis.

Another case has received a lot of attention. A teenage boy became romantically involved in a relationship with an adult woman who convinced him to shoot her father-in-law and his best friend’s grandfather. He went to the man’s house and waited with a 30-06 rifle for him to come out, and then shot him two times. Remarkably, the man survived the shooting. The teen was waived into the adult court system and sentenced to several years in adult prison, where he served his time and was set to return home. There were many fears about the impact this would have in a rural area where everyone knows each other. A restorative conference was held involving many community members in which the grandfather forgave the young man. A video was made of the conference for training purposes, and an interview between Judge Ingram and the young man were recorded for StoryCorps, an independent nonprofit whose mission is to record, share and preserve stories of people’s lives.

Ingram, who was recently identified by the Idaho Supreme Court to be the Statewide Juvenile Justice and Child Protection Judge who provides leadership to the juvenile magistrates around the state, credits Ashton and probation officer Linda Boguslawski for driving implementation locally and statewide. Idaho now has 110 trained restorative conference facilitators, and 21 of 44 counties currently have trained facilitators using a variety of conferencing, circles and family group decision making (FGDM) conferences.

Fourteen people across the state, including Ashton and Bogulawski, have now been trained by the IIRP to train new facilitators. Twelve of the trainers have committed to offering one free training per year in their areas to train yet more restorative conference facilitators. Three statewide professional training conferences – Idaho Juvenile Justice Association, Idaho Prevention Conference and Idaho Conference on Alcohol and Drug Dependency – are offering training and educational workshops on restorative justice and restorative practices.

About two-thirds of the restorative conferences happening in the state rely on facilitators who volunteer their time. However, according to Ashton, in one-third of the conferences, the facilitators are being reimbursed for up to 10 hours for prep time and the conference, with state funding allocated through the Department of Juvenile Corrections.

The initiative is also benefiting from private support. The Northwest chapter of Easter Seals/Goodwill, with the Idaho Juvenile Justice Commission, sponsored production of a short video to explain restorative conferencing. A teenaged boy compellingly tells how he and a friend set off fireworks into a party of people they passed along the road on July 4th. He was arrested for the prank but was able to make amends and find closure during a restorative conference.

Formal and informal circles based on the FGDM model, in which families and communities of care engage in a problem-solving process to develop support plans, also play a key part in the work being done in Idaho. One state juvenile corrections center is using the concept to engage youth and their families to help young offenders successfully transition home and to address family-related issues. A local mental health agency, Proactive Behavioral Health, uses the process routinely at in-take. The organization has also developed a restorative alternative day-treatment program and an after-school program for adjudicated youth.

Ashton said, “Restorative practices have really helped us revive what we know in Idaho to be the best way for us to work with our kids and our families.” Ingram noted that the idea of Balanced and Restorative Justice (BARJ) was encoded in law by the Juvenile Corrections Act of 1995. He said, “But the questions remained about how one actually does the restorative part.” Ashton said, “The IIRP training that Idaho has received has been instrumental in regenerating and reinforcing adherence to those foundational principles of BARJ. It’s the impetus for us to get back to our restorative justice roots.”

Ingram said, “We want to keep kids in their communities and their schools. The idea is to reduce the number of kids in commitments and also keep communities safe. That’s the goal, and we’re on the right track. We still have a lot of work to do.”

If what they’ve already accomplished in four short years is any measure, that work will certainly happen.