Report on the Fifth International Conference on Conferencing, Circles and other Restorative Practices

The IIRP's fifth international conference, "Building a Global Alliance for Restorative Practices and Family Empowerment, Part 2," in Vancouver, British Columbia, Canada, was a tremendous success, thanks to the many dedicated participants who journeyed from far and wide to contribute their wisdom and experience to the event. 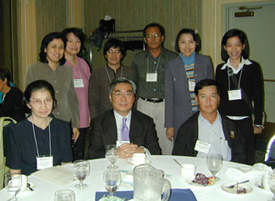 Attendees came from such countries as Australia, Belgium, China, England, Hungary, Ireland, Japan, the Netherlands, Scotland, South Africa, Spain, Sweden, Thailand; seven provinces and two territories of Canada; and 26 states and the District of Columbia in the United States. There were representatives of such First Nations and Native American nations as the Akwesasne, Aleut, Champagne and Aishihik, Couchiching, Flying Dust, Heiltsuk, Inuvik, Kahnawake, Liard, Mi'kmaw, Ojibway, Peguis and Wet'suwet'en.

It was exciting to see how restorative practices are gaining ground across the world, in criminal justice, school, child and family welfare, and other applications. It was also encouraging to note that restorative initiatives are beginning to encompass entire communities, instead of being limited to separate venues.

The conference locale, British Columbia, is an area where restorative practices are flourishing. Two plenary sessions highlighted this rich activity:

Bonnie George, of the Wet’suwet’en First Nation, in the northwest part of British Columbia, discussed the Wet’suwet’en Unlocking Aboriginal Justice Program (WUAJ). The WUAJ is a community-driven restorative justice project developed in response to her people’s dissatisfaction with the Canadian judicial system and the disproportionate number of Aboriginal people involved in the federal and provincial court systems. WUAJ’s focus is on restoring balance and harmony within the community. Related paper here.

Rick Hugh and Jenni Lynnea, educators in Surrey, Greater Vancouver, discussed the challenges of implementing restorative practices in their school district, one of the fastest growing and most broadly multicultural districts in Canada. Two busy secondary educators, Hugh and Lynnea embarked on a mission to educate others about the potential for restorative practices in their school district. Their efforts have provided the foundation for a respectful environment for the district's staff, students and families, while building community.

Use of community justice forums is on the rise across British Columbia. In this voluntary process, a victim, an offender and their supporters come together with a facilitator to restore relationships and repair harm caused by an incident.

Rob van Pagée, of Eigen Kracht Centrale and Op Kleine Schaal, in the Netherlands, discussed the implementation of the Real Justice and family group conferencing models in his country and beyond. He advocated the regular use of restorative practices, not only because he believes that the best solution is for the family and their social network to come together in a circle to solve their problems, before professionals intervene, but also because it will give insight into possibilities for a new relationship between government and citizens. Related paper here.

Two staff members from the IIRP, the conference host, which is based in Bethlehem, Pennsylvania, USA, presented plenary speeches, as well:

Paul McCold, IIRP director of research, discussed three conceptual structures: the social discipline window, stakeholder roles and the restorative practices typology, which together explain the "how, what and who of restorative justice theory." Related paper here.

Ted Wachtel, IIRP president and founder, talked about how restorative justice principles have extended into areas beyond criminal justice and explained the conceptual foundations of restorative practices,including the psychology of affect, the compass of shame and fair process. Related paper here.

Laughter during a conference plenary session speechNumerous fascinating breakout sessions were offered to (and by) conference participants from all over the world. It was difficult to choose which ones to attend, as is always the case at IIRP conferences. Here is a brief random sampling: 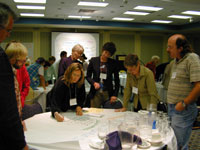 Conference attendees convened in self-chosen groups to discuss themes such as funding, role of the facilitator, child and family welfare, prisons, victim awareness, and homeless people and restorative practices. The aim was for attendees to see how their work fits with and contributes to restorative initiatives around the world. Participants discussed their experiences and opinions relating to each topic. Then each group created a graphic representation or "map" of their discussions.

(Papers voluntarily provided by presenters. These do not represent all breakout sessions)

Reno Guimond, Restorative Justice and Healing in a Federal Prison for Women

Kelly Richards, Exploring the History of the Restorative Justice Movement