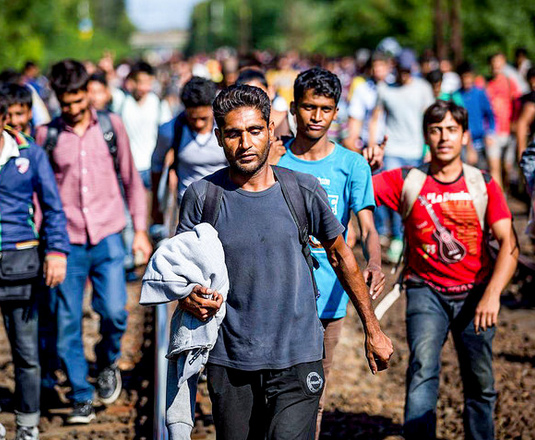 Restorative circles are building relationships and mutual understanding at a refugee camp in Belgium. The camp, like many others across Europe, is crowded with asylum seekers fleeing conflicts in Iraq, Syria and Afghanistan. In this environment of tension, hope and clashing cultures, circles are enabling people to be heard and resolve their conflicts. This work has the potential to improve conditions for refugees everywhere.

Within the first hour of a weeklong residency at the camp, Vidia Negrea, International Institute for Restorative Practices (IIRP) Trustee and IIRP Europe’s regional representative from Hungary, heard about a teenager who had broken a window out of anger. He had just been told that his asylum request had been denied and that he would be deported home. He had asked for a proper bag for his clothes — he only had a plastic bag and felt ashamed — and had lashed out when a staff member refused his request.

Hearing about this, Negrea asked officials, “Do you have any rituals for someone leaving?” She quickly organized a circle with the young man, a friend, who translated, and two staff members. They talked about and resolved the issue with the bag and the window, and then they took time to say their goodbyes. Afterwards staff said, “Teach us how to run this circle. This is what we need.”

Six percent of 30,000 asylum seekers who entered Belgium last year were unaccompanied minors, according to Fedasil, Belgium’s Federal Agency for the Reception of Asylum Seekers. Negrea observed that staff at the camp lacked the skills and training to address the personal and social needs of these youth.

During her residency, Negrea employed restorative practices to address harm, problem-solve and build a sense of community and belonging with youth, adults, staff and volunteers from the surrounding community. She will present on her work, “Restorative Actions Across Borders,” at Restoring Community: IIRP 21st World Conference in October.

“By engaging people in restorative processes such as circles, I was hoping to help create conditions where people feel safe enough to talk about things that matter most to them,” explains Negrea. “They can also use these processes to address day-to-day needs as well as future possibilities in a fair and respectful way, protecting personal integrity and the values of their community.”

Another circle Negrea organized concerned children making a mess in the center’s bathrooms. Staff had responded with anger and punitive measures, but this failed to change the children’s behavior. In fact, the only effect was to strain relationships. Negrea brought together two staff members and more than a dozen children to talk it out.

During the circle, everyone took turns with a talking piece, which signifies who gets to speak. Staff explained their frustrations, and the children had a chance to respond. It turned out that the children were doing their best and didn’t understand why staff were angry at them. In their home cultures, they washed their feet before prayer, but the sinks in the camp were too high. At home they never used toilet paper; instead they washed themselves with water. They acknowledged that their lack of understanding about how to use the toilets hygienically created problems, but they were not doing it intentionally.

Staff were impressed during the circle that the youth spoke civilly and listened patiently, and the process built mutual understanding between all participants. A staff member suggested issuing plastic tubs to the children for washing, and the children welcomed this. Although one meeting didn’t resolve every issue, the staff saw how the talking circle could solve problems.

As the week went on, staff recognized that they also needed circles like these to talk to one another and vent their feelings in this highly charged and tense environment. Negrea explains, “It is important that in order to actually have our needs met and dissipate the anger that drives us toward greater disconnection and potential conflict, that we identify our unmet needs rather than become angry or resentful with others.”

Negrea also emphasized to staff that beyond reacting to situations, they could also use restorative practices proactively, to build good relationships, give structure to daily routines and establish a healthy environment where day-to-day stresses no longer block the creativity, spontaneity and empathy needed in their work.

Negrea underlined the need for open, direct communication throughout her stay. She spoke with children and adults individually to learn about their lives and what brought them to Belgium. Cultivating one-on-one relationships enabled her to bring people together for larger conversations. She hoped her model would be adopted after she left.

In the week’s highlight, Negrea worked directly with adult asylum seekers to plan an Iftar feast, the evening meal to celebrate the breaking of the daily fast Muslims keep during the holy month of Ramadan. Planners participated in two talking circles to organize the meal and address concerns and potential obstacles. The adults feared that the young people might come and destroy their hard work, so a staff member from the young people’s department was included in the discussion.

On the day of the feast, youth helped decorate the hall. Cooking began at sunset — nearly 10 p.m., as it was nearing the summer solstice. The feast was a delicious success, and everyone agreed it couldn’t have happened without the preparatory discussions.

On the last day of her visit, Negrea met with community members from a nearby village who volunteer at the camp. She provided a safe space for them to tell their stories about what is difficult and what makes them proud about helping out at the camp.

Negrea sees tremendous potential for use of restorative practices with refugees throughout Europe. “Maybe it will sound naïve,” she concludes, “but the use of restorative practices from the first day when people come to a place like this camp could help asylum seekers deal with their traumatized past and see the possibilities for contributing to the new community they would like to belong to. Maybe they will also start to think about what can be done in their countries, where the conflicts are too big to be tackled by individuals or small groups.”