Time for a new dialogue on family violence 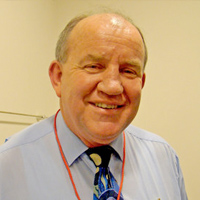 In this guest post, Terry O’Connell, restorative pioneer and creator of the International Institute for Restorative Practices (IIRP) Real Justice Conference script, argues that the conversation on family violence needs to change from blame and punishment toward harm and relationships. The article first appeared in New South Wales Police Association News, Vol. 96, No. 3 (March 2016), Australia and is posted here with their permission.

There is a need for a very different conversation about family violence. Notwithstanding the significant funding being offered at a state and Commonwealth level, we’re hearing more of the same: greater enforcement and reliance on keeping people safe through the use of surveillance, alert devices, etc. In truth, that doesn’t help people to feel safe. I’m not saying that we ought to exclude any of that. But we have to provide an opportunity for dialogue between all of the stakeholders so that, in particular, males who dominate as perpetrators understand the impact their behavior has not only on their partner, but significantly on their children. That dialogue can take place in a number of ways.

No research has been done, but anecdotally, when perpetrators say the system is weighted against them I ask them to explain why. The answer given is, “The only focus is on what I’ve done and not on some shared responsibility for relationship breakdown.” They’re saying they haven’t had a process that has allowed them to deal with a whole raft of painful emotions in a healthy, constructive way. That’s the same argument that applies to victims.

As a state, what we tend to do to perpetrators through law enforcement is to dominate and isolate, which is what perpetrators do to victims. The difficulty is we’re promoting the idea that the way to deal with conflict and violence is through isolation and punishment when in fact the answer is to be found through dialogue.

An inordinate amount of focus is given to policing without really understanding the bigger picture in terms of family violence. That is, when relationships break down there must be processes other than law enforcement to help those involved find meaningful ways of resolving the conflict or, alternatively, ending the relationship.

The evidence shows that what victims want more than anything is for the behavior to stop and the relationship to improve, particularly in the early stages.

A young indigenous woman responded saying for the behavior to stop and the relationship to improve.

It’s very clear that victims of family violence want an alternative that simply isn’t available. Because the major focus is on blame and punishment, very rarely is the process able to meet the needs of those directly involved.

When I was policing I remember being asked to intervene in a matter where police had attended reports of family violence on no less than 20 occasions.

Both parties had apprehended violence orders (AVO) out against one another. There was a 13-year-old child. Both parties had been arrested; both parties had involved lawyers; there were issues of property settlement. I knew that the only predictable outcome was going to be a disaster.

I got both parties together with their child and family support. After a two‑hour process they began talking about the things that were still important to them. For the first time they started to understand the impact it was having on their child. The good news is not only did they withdraw the AVOs and stop the lawyer involvement, but they got back together and were eternally grateful that we as police sought to exercise a very different option.

In 2000 my colleagues and I began working and supporting the Goulburn Family Support Service. We provided them with an explicit practice framework for working with all stakeholders involved in family violence. It is probably the only agency in Australia that works with both parties. The success has been outstanding.

There’s a need to change the conversation from blame and punishment towards harm and relationships. We must stop doing things to and for and learn how to work with, to collaborate with those seeking our support.

When I ask all those involved to describe what a good set of outcomes looks like in any family violence intervention, most struggle to describe it. When they do describe it they always talk about the end of the relationship. That’s not what victims are wanting. The reason the agencies don’t know this is because they never make the inquiry.

According to a recent U.S. report, victims are looking for options other than punishment and they’re not focused on separation.* Victims or survivors discover that once the formal system kicks in they absolutely lose control of it and that it fails to address the underlying cause, which is the relationship breakdown.

In 1990 as an operational cop in Wagga (New South Wales, Australia) looking for better ways of dealing with young offenders, I began to realize that engagement and dialogue provided the best opportunity to reduce reoffending and to rebuild relationships.

I quickly realized that in family violence, notwithstanding the need for constraints and all of those very necessary sorts of interventions, if dialogue isn’t part of the process very little will change.

For the last 15 years I’ve worked in indigenous communities both in Australia and overseas. I’ve observed a fundamental failure of formal policing to address the issues of violence, and in particular family violence, in those communities.

I’m very aware that suggesting a need for a different conversation will be interpreted in less than helpful ways. The view will be that I’m advocating for a soft approach for perpetrators. In fact what I’m actually proposing is a far more confronting and challenging experience. One that will create the opportunity for meaningful dialogue and a greater sense of obligation and responsibility from those who have done the wrong thing. In the existing approach there are no rituals or processes that genuinely allow those responsible to account to those they’ve hurt or harmed.

I’ve discovered that it is impossible to actually help perpetrators of family violence unless they have some insight into the harm they’ve caused to those they care most about. Nothing excuses violence in any form, particularly violence towards women and children.

As a society we need to shift the focus from problems to possibilities. What’s possible at the backdrop of a family violence incident? If the focus were on discovering the harm and its impact on relationships, the likelihood of a positive outcome, in my experience, will be greatly enhanced.

There’s a parallel in what I’m advocating for and the present crisis in terrorism. We’re now realizing that the strategy of waiting for something to happen is totally unacceptable and that we need to engage those who are being radicalized in a proactive way.

This is something we need to do at the early onset of family violence. We simply need to stop looking at the symptoms and understand what the causal factors are.

In a practical sense, consideration should be given to services that can assist how frontline police respond to family violence issues in a more comprehensive way, not just services that rely exclusively on court processes.

A different narrative will allow those who seek help to have confidence in the system being more likely to provide a hopeful outcome: i.e., the relationship will continue or improve or that the termination of the relationship won’t be a complete disaster.

Critics of my approach are concerned about power imbalance and safety. I know of no other process that deals with those issues than widening the circle. Providing a voice to victims is fundamental to their safety. My experience has shown that by widening the community circle, involving family and extended family, the possibilities are endless in terms of the change needed to build and foster healthy relationships. More importantly it allows children to realize that conflict is a normal part of relationships and the most effective way to deal with conflict is through dialogue.

When violence occurs in families, what can we do that genuinely holds those responsible to account whilst at the same time ensuring a strong civil society? I can countenance any process of enforcement, sanctions and punishment; however, this must be accompanied by an opportunity for dialogue if we’re to effectively respond and not react to family violence.

I also accept that there is a category of perpetrators that is unlikely to respond to the persuasion of dialogue; however, these are very few in number.

Terry O'Connell will be a featured presenter at the IIRP Latinoamérica conference in San José, Costa Rica,  June 6-7, 2016.