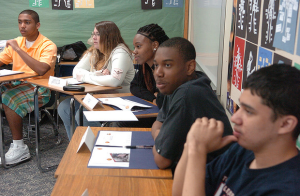 "Hurt people hurt people: Helped people help people," write Angela Dornai and Dorothy Vaandering in an article in the March/April issue of Canadian Teacher Magazine. They illustrate their theme with an emotionally charged incident that in many schools might have led to a suspension or expulsion but instead resulted in better understanding all around. The following happened in a Toronto area school and provides a great contrast to the "school to prison pipeline."

On the day we were to examine Incident [a poem by Countee Cullen about the impact of being called "n*****" as a child] in Grade 12 College English, a student from another class came in and addressed a group of students as “n******s.” The response was immediate and volatile. Literature and life collided, setting the stage not only for meeting curriculum expectations, but also for supporting and holding each other accountable to the agreement we had established together at the start of the semester — that as we studied the academic curriculum, we would also work together to improve social, emotional, behavioural and academic outcomes for individuals in class and beyond.

As their teacher, I hoped this experience could be another chance to more deeply grasp the necessity of accepting each other as interconnected beings who value and honour one another not for what we do or say, but simply because we are human (Vaandering, 2011). When words cut like weapons and fists clench in response because words fail, such an ideal seems next to impossible. However, it underpins a most important R in education— Relationships — and is core to the shift required for increasing students’ sense of safety and belonging, academic achievement and character development. Supported by researchers and practitioners across the country, the message rebounds from coast to coast: relationship problems require relational solutions! . . .

I offer a current story of hope that returns us to the young man — we’ll call him B — who targeted his peers with the n* word. This epithet wounded the targets, and those of us who stood by. One responded by promising that he would mete out physical violence to teach a lesson. Others wanted a long suspension. Still others said, “No point doing anything—nothing changes.” These default responses challenged our class agreement that promised accountability and support for everyone in the face of harm. When reminded, the classmates considered how these options would produce “bigger picture” outcomes where cycles of hurt upon hurt might not be broken.  . . .

After listening to everyone’s perspective through the now routine talking circle approach, students asked that a similar collaborative dialogic approach be used with B. Would admin converse with the student and me, representing them, using the framework of questions we’d used before?

The administrators and student agreed. Afterwards, I shared the following with my class. B had no idea he was giving offence. B’s intention was to connect with a group of guys in a way that he thought was socially appropriate. All he really intended to do was to enter into a conversation. He’d seen it used on TV, in movies and in music videos. He’d actually used the word before, and had indeed been told to shut up by these same peers. He’d been told “Don’t use that word again or else!” but didn’t think that anybody meant anything by it. He actually thought that through this interaction, he was being part of the group. When he concluded that not only had he caused significant hurt, but that his efforts to engage had alienated others, he wanted to make amends. He wanted all to know that he really didn’t understand the offence at the time, but now he did. He promised never to use the word again. He realized now this would increase the likelihood that he’d be less alienated, less likely to be physically harmed by his uninformed word choice and more included by peers in future interactions. In relating this, students’ epiphanies around how we all experience intent were profound. B asked me to share with the group how very much he wanted to be a part of things, which is why he came into a class not his own in the first place. I shared how this same young man spent months volunteering with our school’s developmentally delayed students, both in and outside of school. As perceptions shifted, my students realized that B was not who they had experienced him to be, and considered ways to be more welcoming to others beyond their group. Some, in fact, decided to also volunteer with our developmentally delayed students, and now work with B.

Angie Dornai is a restorative practitioner, trainer and teacher, who has trained with IIRP. Dorothy Vaandering, Ph.D. is an assistant professor in the faculty of education at Memorial University of Newfoundland. This year, they are working with teachers, administrators and community groups in Newfoundland on phase one of Relationships First: Implementing restorative justice in education from the ground, up!

The entire article may be read and downloaded as a pdf here.