Peacebuilding in Rwanda through children's literature 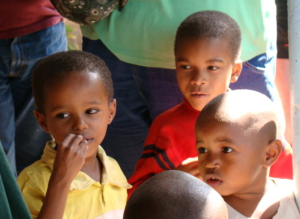 During the school year, Kristen Swanson teaches middle school at Pennridge School District in eastern Pennsylvania, USA. But this summer she will be leading a group to the nation of Rwanda in Africa to provide a learning experience for a new generation of children’s writers.

Rwanda, which is still recovering from the genocide committed there in the 1990s, will welcome Kristen and a team of experienced writers to Kigali, the nation’s capital, to deliver a writing workshop. The team's goal is to “build a culture of books starting with the very youngest readers” and “to spread stories of courage, forgiveness and reconciliation to the next generation” (as quoted on the project’s successful “Kickstarter” page).

Kristen lived and worked in East Africa for 10 years before returning to the United States. She has not only shared her love for Africa with her students here, but now she finds herself leading  one cross-cultural project after another. Kristen, who has taken courses at the IIRP graduate school, says that the restorative perspective colors her ideas about everything she does. In her work, she draws heavily on the basic techniques for bringing people together, bringing out their stories, and allowing people to discover what reconciliation and resolution could look like.

The seeds for Kristen's current project came during a previous trip to Rwanda. She writes:

I was facilitating a writing project for American kids visiting Rwanda. ... The American visitors had been students in my seventh-grade Gifted Seminar a few years before, when one of them had instigated her own book project. Our school offered students tiny micro-loans to develop small businesses, in order to donate any profits to causes they cared about. I had told my gifted kids many stories about my visit to a girls' secondary school in Rwanda that educated orphans, so Alison and a friend decided to write a book about it. They collected the Rwandan girls' stories by email, edited and designed the book, and published it at Staples, batch by batch. My middle schoolers astonished everyone (including me!), by raising over $9,000 for the Institute of Women's Excellence (IWE), as they sold the book and spoke at bookstores, churches, and local service organizations. On our trip, my American students spent four days with the girls of IWE, orphans of genocide and AIDS, personally interviewing them to update their book, “Inzozi: Dreams of the Future.”

That project led to another, in which Kristen and numerous supporters donated over 5,000 books to IWE and raised enough money to build a library room to house the books. This turned out to be only the second English-language library in Rwanda!

This winter ALARM (African Leadership and Reconciliation Ministries), the charity and service organization that started the IWE school, invited Kristen to return again this summer. Kristen immediately set out to raise the $6,000 dollars needed for the project ($1,000 for air fair for each of the workshop teachers plus $140 per participant for room, board and travel expenses). Most of this money poured in from friends and supporters, with an organization called Orphan’s Promise making up the difference.

The group is now set to leave for Rwanda in July. They expect 10 to 20 people from Rwanda and Burundi to participate in the workshop. Peter Catalanotto, the lead trainer, will find out exactly who the audience is when they arrive on the ground and quickly adapt the specifics of the workshop to the audience. The other teachers will help to coach the participants. Kristen says that because the country has just switched its official language from French to English, there is a great need right now for inexpensive reading materials for young kids.

One of the goals of the project is to preserve old tribal stories for a new generation. Kristen has also set a goal for herself to write her own book based on the survival story of a friend who was a slave to Congolese rebel groups for 8 years. Afterwards, Kristen hopes to maintain internet connections with the Rwandan writers for years to come, and to connect writers in Rwanda with writers in the United States.

Kristen would also love to build a bridge between IIRP and ALARM, which she described as an organization that does peacemaking through building relationships. This seems to be exactly what she is doing through projects like Rwanda Writes, as well.

"All the planning wasn’t mine," emphasizes Kristen. "It just came together through a group of people and just sort of evolved. Amazing things keep happening. We keep bumping into the right people. I can’t wait to see what happens."