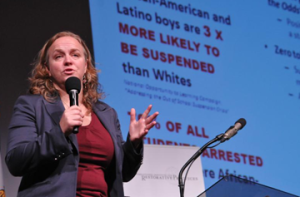 Staff members from NPS joined forces with NPD to shift school discipline policies from zero tolerance to youth development. The training was facilitated by the world renowned International Institute for Restorative Practices (IIRP). The initiative was spearheaded by NPD Police Director Samuel A. DeMaio and NPS Superintendent Cami Anderson.

More than 150 participants, including all Newark high school principals and NPD School Resource Officers, were trained on restorative practice to improve school safety and culture, a key component of the District's larger strategy to transform Newark's high schools.

"We are fiercely focused on improving school safety and culture in our high schools because it's what great schools do – zero tolerance policies do not make schools safer. But it's more than just safe schools- improving school culture fosters the conditions for learning," said Ms. Anderson as she welcomed the participants on the first day of training.

In the midst of United States Attorney General Eric Holder's recent announcement of mandatory minimum sentence reforms for non-violent offenders and United States District Court Judge Shira Scheindlin's ruling of "stop-and-frisk" tactics used by New York City Police officers as unconstitutional, the need for an alternative to punitive and exclusionary school discipline policies is more crucial than ever before.

Restorative practice takes a youth development approach to helping students acknowledge the harm that occurred, understand its impacts and think through what needs to happen to make things right. National research proves that zero tolerance policies that rely on expulsion, out-of-school suspension and transfers to alternative school are simply not working. The American Psychological Association reports that, "…these practices harm academic achievement for all students while increasing the chances that those excluded will be held back, drop out, and become involved with the juvenile and criminal justice systems."

As a result, more and more educators are turning to restorative practice to improve school safety. The NPS/NPD training will lay the necessary groundwork for ending the school-to-prison pipeline. "As we prepare for the coming school year, and look to build a community of supports -  schools will receive intensive coaching in strategies to reduce incidents of school violence, bullying and create a sense of community through conflict management, peer mediation, group conferencing and other strategies," states Robert Clark, founder and executive director of  YouthBuild Newark. Every high school in Newark will participate in year-long trainings and will be matched with a lead Newark police officer who is familiar with that school's community. They will work with parents and stakeholders to implement a tiered approach for positive behavioral support.