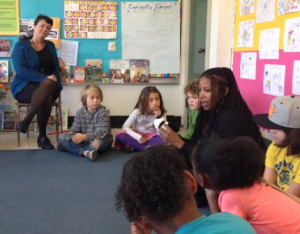 In addition to the whole-school circle in the morning, each class has its own daily community circle. Every classroom has a carpeted area where students and teachers sit on the floor to share their thoughts or feelings. In Marisa Martinez’s 3rd grade class, students pass a small stuffed panda around the circle, to mark who has the floor. Today they’re talking about people or animals that have passed on.

A boy in a hooded sweatshirt says, “One person who I would like to celebrate is my grandmother – my mom’s mom. She passed away last year, and I want to celebrate her. She was really nice to me.”

Another boy says he wants to remember his pet rat, Pumpkin, “because he was really smart and he learned how to jump up and open doors when they were locked.”

The kids listen quietly to each other, giving silent thumbs up when they agree with someone’s statement. Sometimes giggles break out, but they seem remarkably calm for third-graders.

Kerri Berkowitz [is] the district’s program administrator for Restorative Practices. She says she gets pushback from teachers who feel it’s too “soft” an approach to behavior issues, and that kids need more discipline.

“I feel like we almost need to reclaim that word: discipline,” Berkowitz says, “to move it more toward learning. Learning about one’s actions.”

Berkowitz says the district is aware of research that “very clearly shows how our implicit biases and stereotypes impact how we relate to one another, and to our students.”

So at Harvey Milk, teachers sometimes have what they call “courageous conversations”, where they try to lay bare their feelings. It could be a time that another adult offended them, or a time they had a conflict with a student of another race, class or culture. The aim is to create an atmosphere where everyone, child and adult alike, can feel safe.

Berkowitz says she knows there are critics who think this kind of thing is too touchy-feely, or may overstep the boundaries of a school’s role or responsibility. But she says the district believes Restorative Practices is actually directly related to learning.

Read the full report and listen to the audio.

IIRP did initial trainings for several pilot schools in San Francisco and licensed trainers who are continuing the implementation across the district. Watch a short video of student responses to RP at San Fracisco Unuified School District.