Breaking down barriers in Costa Rica 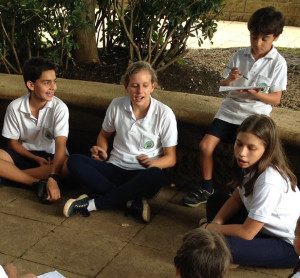 Students from diverse backgrounds are learning to get along by participating in circles at the Blue Valley School in San José, Costa Rica, a small, private preparatory school for children from pre-kindergarten to 12th grade.

When a new student joined the seventh-grade class, he became a victim of bullying. He was an English-speaker, and some of the other boys started calling him a rude name in Spanish that he didn’t understand. He told his parents, and they brought the situation to the attention of the principal, who suspended the boys. But tensions persisted, so Ortega ran a restorative conference. In this safe environment, the new boy talked about how being called the name made him feel, and the suspended students reflected on the impact of their actions. The tensions evaporated.

“The need for the circles is the same, no matter the nationalities, not because we have many children from across Central America and around the world,” Ortega maintains.

“John,” a socially-awkward sixth grader, sometimes annoyed fellow students until they scolded him. He responded by isolating himself. His mother wanted to take him out of the school. Ortega decided to hold a circle to with the children to resolve the problem.

Ortega first spoke to John privately. He said he felt the kids were harder on him than they were on other students, holding things against him for a long time. Then Ortega spoke to the students John claimed were hardest on him. They maintained that John didn’t try to join in with the group, but they agreed to participate in a circle.

During the circle, John shared his feelings, but he found it hard to hear how the other students felt. Ortega guided the group to a successful agreement by asking: 1) What can John do to improve his relationship with others? and 2) What can others do to improve the situation?

Everyone promised not to bring up the past. John agreed to tell his classmates when something was bothering him, and they agreed to listen when he did. The other children promised to include John in their activities, and he agreed to participate. John is now having a positive experience at Blue Valley School.

Ortega is amazed by the way even young children can have insight into what needs to be done to create a more positive class environment. The key is to focus on relationships. In a first-grade classroom, students participated in a circle and expressed how they felt when a verbally aggressive student threatened to hurt them.

Now all teachers at Blue Valley have been trained by IIRP Latinoamérica in Introduction to Restorative Practices and Using Circles Effectively and are initiating circles. At the middle school level, for instance, teachers use circles during weekly “character classes” to build community by giving each student a voice.

Ortega sees great promise for the practices and looks forward to sharing her school’s experience with people from all over the world at the IIRP Latinoamérica conference in Costa Rica this June. “I’m really looking forward to telling everybody — not just those who work in schools — how this really works to help students talk about how they feel and what they think needs to be done to improve their social interactions.”