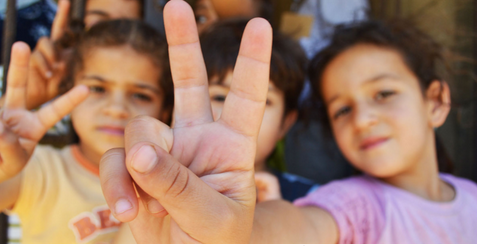 Image by Trocaire via Wikimedia CommonsAcross Europe, communities are struggling to deal with the consequences of Syrian immigrants arriving, settling and attempting to integrate into society. In the Romanian port town of Brăila, Vidia Negrea, IIRP Europe’s Regional Representative for Eastern Europe and IIRP Trustee, recently ran a restorative circle to begin to address issues that have strained relationships in a local school.

Until the circle, the connections between the Syrian refugee community and the Romanian community in school were extremely limited. The lack of a common language and understanding of cultural differences has led to a climate of fear and mistrust on all sides. School administrators have felt that despite reaching out to refugee parents, communication is very limited. Sons of Syrian immigrants are attending school, but the Syrian community does not seem committed to having them learn Romanian language, history and culture. More frustrating, the Romanians have observed that the Syrian community has kept its daughters away from the public school and in fact have opened their own separate school for them.

For their part, Romanian parents have expressed a fear that the presence of Syrian boys, who do not understand the local language and culture, has hindered the quality of their children’s learning. Teachers have said they don’t know how to fairly assess the Romanian and Syrian students, who are at very different levels.

Recent attempts to step up communication with the Syrian community have resulted in greater mistrust and conflict. Negrea heard about this from representatives of the Romanian National Institute of Education, who sponsored her to teach a two-day workshop in the capital city of Bucharest for 20 teachers across the country working with refugees. Drawing in part on her long experience working with Roma communities in Hungary and Romania, as well as her experience in Syrian refugee camps in Belgium, Negrea suggested that direct communication between all the parties would be the best approach to increasing mutual understanding.

The circle, in a school classroom, was attended by two representatives of the National Institute of Education, a handful of Syrian fathers, a larger number of Romanian parents, three teachers and the school principal.

Negrea noticed that the few Syrian fathers – no mothers were present – resisted at first joining the circle of chairs she set out of the occasion. Undeterred, she looked around the room and chose a stuffed toy bumble bee as a talking piece, an item used to indicate who has the right to speak. When she did this, everyone laughed, and it helped break the ice. Negrea explained that she chose the toy as a symbolic reminder that the circle was all about discussing the children. 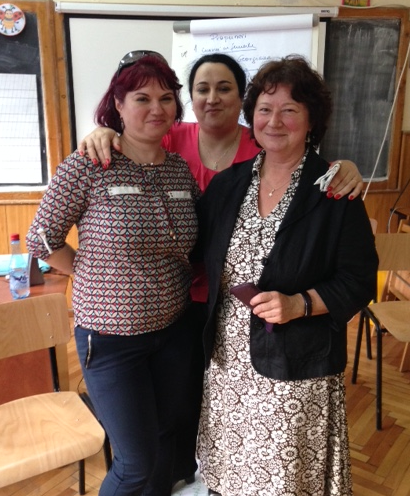 Vidia Negrea (right) with school administrators in BrăilaThe principal of the school spoke first, and the tone she attempted to set was a direct result of the preparation she received from talking with Negrea beforehand. Explains Negrea, “The director expressed why it was important to have this circle. She was honest and clear, stressing that she will do everything possible for the Syrian children to be integrated into the school, while also serving the Romanian children as well as possible. She said, though, that she needs more direct communication between parents and teachers, and between Syrian and Romanian parents, so people feel safer and more confident in their daily life. Rumors sent home by children were creating tension with parents. This circle would provide a place for them all to share the rumors and their fears with each other. It would bring to the table issues about how to keep all the children safe in the school.”

After that, Negrea passed the bumble bee around the circle and allowed people to talk. Initially, people were somewhat guarded and uncomfortable. The most dominant of the Syrian fathers refused to hold the talking piece and preferred to pass. A relative whispered something in his ear, and he accepted the talking piece grudgingly. But Negrea persisted, and after two go-arounds the group feeling started to shift, and the conversation developed.

First, it became clear that the Syrians who were present represented themselves as well as other families. One of the fathers agreed to serve as a go-between for the teachers and the mothers of the boys in the school. This has resulted in a series of further meetings between Romanian and Syrian mothers to share their culture, including a recipe swap.

The teachers brought up several cultural issues. One had to do with the upcoming fasting month of Ramadan. Could students be expected to participate in the same way during this time? A discussion ensued about this issue.

A thornier issue had to do with the absence of the Syrian girls in the school. The Romanians did not understand the reason for this, and the Syrians were not forthcoming. Negrea felt it was important that the discussion was opened, but in the moment the issue was addressed only superficially and was not resolved.

Obviously there needs to be further discussions and actions. But Negrea says the Romanians were very pleased with the circle and saw it as a way forward.

Negrea plans to encourage the building of networks and widening of the circle. The continued meetings of the mothers of the school students is a good start. She has also encouraged the teachers in her Bucharest workshop to stay in communication to share their challenges and ideas. In September, Negrea hopes to facilitate a Skype meeting between Syrian refugees in Brăila and refugees who are students of a colleague in the Bronx, New York, about their respective experiences of being refugees to a new country. Finally, Negrea is hopeful that European Union and other funding will be found to continue the work of building bridges between refugees and local communities through restorative practices.