A Restorative Story at a Toronto High School 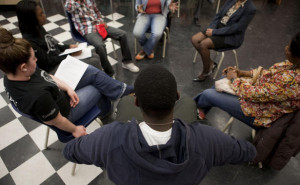 Photo by Matthew Sherwood for the Toronto StarCatherine Porter has a great column on the front page of the Toronto Star the other day, the city's highest circulation newspaper which also circulates throughout Canada. The piece opens with a moving anecdote:

A week ago, two friends at Weston Collegiate Institute had an argument.

One was a slip of a boy in Grade 9, his plaid shirt buttoned right to the Adam’s apple. The other was an 18-year-old giant — literally 6-foot-8 — with ear buds and a hoodie.

You know who won.

A few days later, the two sat in the school’s salmon-coloured “Focus on Success” centre (called the detention room in my day) in a small circle of blue chairs with their moms, the school principal and two student facilitators. They’d come to make amends.

“I told him to stop the joke. I didn’t like it. I’m a big gentleman,” said the giant. “I was immature. My first policy is no violence.”

Then it was the slip’s turn. “I thought he knew I was just joking around,” he told the group. “He is my friend.”

His mother then spoke about the impact of the fight in her home. She looked the giant in the eye: “I expect you as a senior to protect my son. You could have really hurt him.”

The giant’s mother spoke next and the room got even smaller: “I am ashamed to be here.”

This is a “restorative conference,” Weston’s alternative to old-school discipline. Instead of suspending students for fighting or bullying, Weston offers them a face-to-face meeting with their victim to discuss the incident and its reverberations, and finally, to draft the penance together. They each get to bring along one supporter.

[quote]Recently, a group of 36 students including some from two of Weston's Middle School feeder schools completed a two-day Facilitator training.[/quote]

The results have been stunning: Four years ago, before “Weston Restores” was created, fights broke out most days at the school, near Lawrence Ave. W. and Jane St. This year, there have been four.

The river of students flowing to the principal’s office for behavioural issues has slowed to a trickle and the suspension rate, once among the worst in the city, has been cut by more than half.

Students say the school feels safer and their relationships with teachers have improved. The administration says the program has worked so well they rarely need to host these conferences.

The story goes on to note that Weston principal Deb Blair "sent staff and student volunteers to be trained as formal facilitators with the non-profit International Institute for Restorative Practices three years ago because of the 'non-stop bullying, especially among girls' at the school."

We have worked with Weston's staff, students and parents over the past 2 and a half years doing training and support (in the RP Framework, Effective Use of Circles and Conference Facilitation along with student assemblies and parent workshops and ongoing support) as well as our work in other Toronto schools and at the system level in Toronto District School Board.  In addition to the initial IIRP Canada training in 2009-2010, Weston and its family of schools has had follow-up professional development for new staff etc. In part they now are sustaining their RP initiative with their own trainers through our Training of Trainers for RP Framework and Circles. Interestingly, a couple of weeks ago a group of 36 students, including some from two of Weston's Middle School feeder schools, completed IIRP's two-day Restorative Conference Facilitator training. Teachers who had taken this training earlier also were present to support and work with students in this at their schools.  This is seen as part of everyone working with one another at these schools in a Restorative Practice Framework.

Schenk also noted that Blair and some of her students and staff did a breakout session at IIRP's 14th International Conference in Halifax last June.

Read the full story from the Star here.