A serious cyber-threat closed down a middle school in Maine for three days. How would students and staff be able to come back to school and feel safe again? Thanks to their preliminary training in “restorative practices,” the school community found a way, not only to return and help each other feel safe, but to turn the incident into an opportunity to build a stronger school community.

Charles Haddock, principal of Windham Middle School, in the small town of Windham, Maine, received an anonymous email threat on Monday, December 15, 2014. The threat raised urgent concerns because it implied violence. Within seven minutes, Windham Middle School’s students were loaded onto buses and on their way home, and Windham-Raymond School District’s superintendent, Sanford Prince, had evacuated all seven schools in the district.

Schools were closed for three days while police tracked down the perpetrator of the threat — a sixteen-year-old student who had a prior association with Haddock. Police found a cache of weapons in the youth’s bedroom, and he was arrested and detained. District leadership had clearly made the right decision in evacuating the schools, averting a potential tragedy.

Three days after the incident, Windham Middle School was back in session. But the school had a simple, practical way to deal with the aftermath.

Instead of jumping right back into the routine of classes and allowing feelings of fear or uncertainty to fester and possibly create future problems, in homeroom, teachers engaged students in talking about what had happened that Monday. They employed “Restorative Questions” to get everyone’s feelings out in the open so they could move on. Teachers knew to do this because Windham Middle School, along with several other Maine schools, has been receiving training in restorative practices.

“The Restorative Questions allowed students and staff to process the incident in a really constructive way,” says Sharon Mast, an instructor with the Bethlehem, PA, based International Institute for Restorative Practices (IIRP) Graduate School, which is leading the Maine restorative practices initiative.

Mast, who was in Windham that Thursday, says that the question, “What can we do to make things right?” provided an opportunity for staff and students to discuss, “How do we help each other feel safe?” and “How do we develop community within school so we can rely on each other?” The children were also inspired by the discussion to write letters to police, thanking them for finding the boy who had sent the threatening email and helping them feel safe in school again.

Seventh-grade teacher Peg Brown, who has taught middle school in Windham for 35 years, says she asked students, “What were you thinking about at the time (of the evacuation)” and “How do you feel coming back?”

In the circle, she says, each child spoke. One student with past trauma had an anxiety attack and broke down and cried during the evacuation. We had to discuss the experience as a group to save that child’s face, and his back. He needed a discussion about the past terror in his life. [That student is now receiving psychological help.] And two young ladies who had accidentally been locked in the gym when school was being dismissed shared the fear they’d experienced.

The circle in her classroom that morning was essential to deal with the stress the evacuation had caused, says Brown, adding, “We couldn’t have gone very far if I didn’t run the circle 100% real. That’s the important thing to identify all the things they’re dealing with.”

Students weren’t the only ones who benefitted from restorative 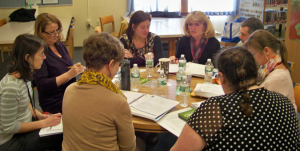 practices in the aftermath of this incident. At the end of the day Thursday, Haddock met with staff, as well as police who had been present during the crisis, to process what had occurred the previous Monday.

“I reviewed the situation with the crisis and reached out and had them express their feelings,” says Haddock. “I asked them to give me feedback on how it went. I told them, ‘You did a great job.’”

Haddock set the tone by sharing his own feelings. “When the event happened I was simply directing and giving evacuation instructions,” he says. “I was with staff at all times, making sure they and the kids were safe. That was draining emotionally. In the meeting, I was open with that, and they knew I didn’t hold back.”

Mast, who was at the meeting, agrees: “Haddock expressed raw emotion through the whole process. He wasn’t afraid to express his vulnerability and his fears.” He said that, during the incident, he was “trying to keep it all together, but at the same time, he realized it could turn tragic in a second. Expressing this made him human.”

Haddock’s candor encouraged staff to open up and share. Mast reports teachers saying, “This was so scary, and I felt so vulnerable, but I felt safe because you [Haddock] communicated with us every step of the way. We felt support and a sense of community. We all pulled together and did what needed to be done.”

Adds Haddock, “We were able to resolve some of the emotions and move beyond them, so they wouldn’t carry on and debilitate us.”

The meeting was also an opportunity to debrief on what had gone well and what needed improvement. “What we had practiced worked well, and we worked well as a team” says Haddock, “So there was praise amongst us in how we did that.” The group also discussed strategies for future possible incidents, including setting up protocols for parents to pick up their children. “That didn’t go as well as I wanted it to,” he says. All in all, he says, the meeting was “a venue that enabled us to share and work as a team beyond where we were.”

In her classroom, Peg Brown is continuing to deal with issues raised by the evacuation. “I bring things to the table and so do the students.” Knowing she would be talking to a writer about the Thursday when school resumed, she held another circle and asked students what they wanted to say about what they’d shared that day. One girl said, “Tell her we felt really safe coming back, because we knew you knew what you were doing.”

Although Windham Middle School is really just beginning restorative practices implementation, in the wake of a crisis, a few simple restorative processes made a big difference. “We feel the strongest connection between us,” says Haddock, “Stronger than before.”