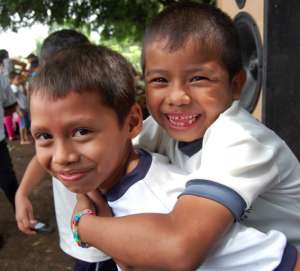 Children are transforming conflict with circle processes in nonprofit Glasswing International's after-school clubs. Trained by IIRP Latinoamérica, Glasswing is also averting suspensions and involving wider communities in El Salvador's schools. Teaching ways to build relationships and community, they hope to prevent the kind of violence and conflict that has plagued Central America for generations.

Glasswing will present their work at the IIRP Latinoamérica Conference this June. They’re receiving support for their presentation through a scholarship from Strachan Foundation in Costa Rica and the IIRP’s Restorative Practices Foundation.

Maritza Trejo, the El Salvador regional education manager for Glasswing International, an international NGO (non-governmental organization) that supports education, health and community throughout Latin America, oversees a team of coordinators and volunteers who provide after-school clubs to more than 20 schools. These programs range from reading, science, math, computers and robotics, to sports, photography, English, art and chess. For nearly three years, staff and volunteers have used restorative practices as a way to build a positive community among children and resolve conflicts.

Trejo sees the effects first hand, because in addition to overseeing the program, she is also a volunteer for a basketball club for girls aged 11 to 13.

“They love it,” says Trejo. “We use a circle every time we meet to check in. Some of the questions are just random and some are very deep about their lives.”

At first, Trejo says, she had to do a lot of explaining about why she was using circles when the kids just wanted to play basketball. But now the girls themselves are taking ownership of the circles. If she’s running late and tries to skip the circle, the girls speak up and say, “Hey, miss, we need to do the circle today.” When a new girl joins the group, they explain the process to her.

“I don’t have to say anything,” laughs Trejo. “I love it when they say, ‘This is a place to feel safe and talk about your feelings. If you don’t want to participate, you don’t have to, but you can say what you want. We are more than friends. We are a family.’ ” 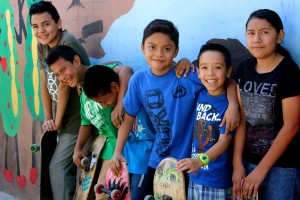 Students in an “extreme skate” club

Trejo says the clubs are meant to provide kids with a positive adult role model. Restorative practices help the adults take it a step further. “Circles provide a safe space so the kids feel an adult is there to listen to them, whatever it is they have to share,” says Trejo. “We’ve seen that kids who are exposed to these experiences participate more in school. Their parents say they are more open. When we bring people to visit the clubs, we don’t have to tell the kids to speak up. They are comfortable and can communicate.”

The practices have had such a positive effect on the clubs that they have spread to the schools themselves. Coordinators at each school have been trained in restorative practices by IIRP Latinoamérica. “Now they can find solutions to problems that don’t require a school to suspend a child,” explains Trejo. “I see it in the school where I volunteer. We’ve had students reaccepted in schools who were going to be expelled.”

In addition, says Trejo, “Teachers are beginning to realize that if they approach a student in a different way, if they see students less as antagonistic, they are more likely to be able to collaborate.”

Beyond that, Glasswing is developing the concept of the Community School, which “use public schools as hubs to bring together many partners to offer a range of supports and opportunities to children, youth, families and communities,” according the Coalition for Community Schools website.

Included in this effort, Glasswing will be formalizing its work around teaching restorative practices to parents, as well as reaching out to local businesses to make them aware of their initiatives and invite their support.

“Restorative practices is important in our context,” concludes Trejo, “and all over the world really, but particularly in the region of Central America. We’ve had a history of wars and violence. The problems we have now are because people can’t communicate with each other. Circles provide us with an ideal safe space so you can do that with others, especially in schools.”