Efforts by IIRP Canada and its partners have exciting implications for the application of restorative practices in the workplace.

Bruce Schenk, director of IIRP Canada, recently worked with the Department of Community Services of Nova Scotia to support its goal of “becoming a restorative organization” and enhancing employee relationships.

At the beginning of the development process, Schenk offered two days of training in the restorative practices framework and use of circles to the department’s deputy minister and 12 senior officials. Subsequently, a group of about 25 people appointed by the senior leaders were trained to serve as a “reference team” to take the lead on developing an implementation plan for the department’s roughly 1,800 employees across the province.

“Normally in government,” says Schenk, “things are decided and rolled out in a top-down way. But, after taking the training, the reference team felt that this needed to be different. They decided they would be quite restorative in how they rolled it out.” Schenk says they engaged the stakeholders, deliberated and came up with a plan that was consistent with an existing organizational change initiative.

One supervisor, who oversees a team that works in child protection, introduced a circle process to debrief after social workers needed to remove a child from an unsafe home situation and send him to foster care. In the circle, the four or five people involved in the case talked through the restorative questions: “What happened? What did you think? What is the hardest thing for you? What do we need to do from here?”

The supervisor explained that though the staff formerly had a good debriefing process, the conversations never ended right away, and people continued to discuss what had happened for several days. After the circle process was instituted, however, those conversations stopped happening after the debriefing. It seemed that when it came to working through these high-trauma, high-stress situations, the circle discussion helped people work through their thoughts and emotions more thoroughly and quickly.

“The most exciting learning from working with the Nova Scotia Department of Community Services is an affirmation that the restorative practices framework has great application within workplaces,” notes Schenk.

The Canadian Standards Association (CSA), an independent organization comparable to the Occupational Safety and Health Administration (OSHA) in the U.S., recently issued a set of 13 voluntary workplace standards affecting psychological health and safety. The standards recognize the importance, for workers’ mental health, of preventing harm, promoting health and responding to incidents of harm in the workplace.

IIRP Canada works with the Center for Workplace Engagement (CWE), a consortium from business, labor and the nonprofit sector, to support relationally healthy workplaces. The CSA has now issued a stamp of approval to CWE for its restorative practices program and its ability to fulfill the workplace standards. 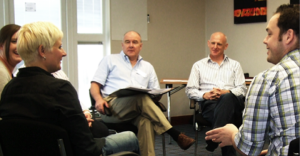 Shalem Mental Health Network, a CWE partner, models restorative practices by using a circle process for its staff meetings. Shalem’s staff consists of 12 employees who work remotely and only meet together once a month. They start each meeting with the same set of three prompts: celebrate a success, discuss a lesson learned and talk about what is coming up. They use a talking piece, and staff can pass if they prefer not to answer a certain question. The group goes around the circle twice on each topic, and during that time people may also ask brief questions of one another. After answering the circle prompts, staff spend about 45 minutes in an open meeting format to discuss various topics. They end their meetings with a closing checkout circle.

Mark Vander Vennen, Shalem’s director, says, “This has led to significant changes in the workplace culture. Staff who always talked a lot find they have to hold themselves back. Staff who didn’t speak up now talk a lot more. In answering the questions over time, people have gotten a lot more personal, and it’s strengthened relationships. We’ve had no staff turnover. The circles have been hugely successful.”

A union rep from the Christian Labor Association of Canada (CLAC), who was trained in restorative practices, asked CWE to work with him to attempt to resolve a years’ long workplace conflict. The housekeeping staff in a retirement home had split into two rival groups. One group no longer ate in the staff room or changed in the designated changing room. Staff avoided talking to one another, often making work as unpleasant as possible for each other. Morale was very low. The staff supervisor, less than a year into the job, was at a loss about what to do.

Circles were convened to address the conflict between the two groups of women, and the effect was almost magical. Women who had avoided each other for years reconnected. They started eating together, and everyone began to share the changing room again.

Rather than stop there with a successful restorative response to the problem, the supervisor decided to go further. She began to use restorative practices to build community among staff. Staff have since made a written agreement outlining how they will support each other and hold each other accountable. When one woman breached the agreement, management and the union rep met with her to discuss what had happened and how to make things right. Disciplinary action was averted.