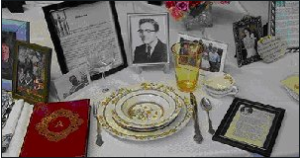 A piece shown during the "Saving a Place at the Table" art exhibit, from Brattleboro Community Justice Center's web siteBrattleboro Community Justice Center (Vermont, USA) presented two exhibits at the city's monthly art gallery walk to commemorate its 10th anniversary and to recognize restorative justice week, which is celebrated from November 17 to 24 in Canada and other places.

Deborah Lee Luskin, for The Commons Online, explains the first exhibit this way:

“Saving a Place at the Table” serves to honor and remember Vermonters who have been victims of violent crime. The exhibit features table-place settings for those killed by criminal violence and those whose lives have been significantly changed by that violence.

These place settings are meant to give a sense of the life that was lost and to mark that person’s absence from the family table. Each place includes a narrative describing who is missing as well as the crime that hurt or killed the person.

Survivors of those killed created the place settings for their missing loved ones. They eloquently articulated how there is never a single victim of violence, even if only one person dies.

Luskin also describes two pieces made by victims themselves:

The first was a place setting that included a paper collage of a fire and a poem by a woman who survived arson in which she lost everything but her life. Her poem articulated how difficult it was to get on with her life, how emotionally scorched she is, and how angry and fearful she remains.

Another place setting was by a woman who survived her ex-husband’s brutal and disfiguring attack. Hers is a remarkable piece, full of gratitude for surviving, and for all the love and support she’s received since. At her place were handmade wooden bowls turned and sent to her by a craftsman touched by her story.

The second exhibit included six piece, along with scrolls made by offenders to tell their story. According to the Brattleboro Community Justice Center web site, "'Art Empathy', a class at Northern State Correctional Facility’s Community High School, challenged offenders to show specific parts of their stories through visual art. The goal was to engage offenders in learning about empathy, compassion and accountability with the overall objective of helping them conceptualize and create a piece of art that expresses their understanding of the impact that their actions have had on the victim in their case."

Luskin, who has been a volunteer with Brattleboro Community Justice Center for six years, comments, :

Side by side, these two exhibits — one by and about victims and the other by and about offenders — increased their individual impact. Seen together, they provided a good reminder of the human stories behind the sensational news accounts or dry statistical accounting of violent crime in our state.

These exhibits also showed how the criminal justice system alone is insufficient.

Prosecuting a criminal does not revive the murder victim, nor does doing so restore victims’ families to their prior lives. Nor does simply locking up an offender aid in rehabilitation. Punishment alone does not necessitate self-knowledge, empathy, or change.

Restorative justice can’t bring the dead back to life or undo the violent acts that killed or maimed. But it can help repair some of the harm by taking into account and serving the many victims of violence and by aiding those offenders who are willing and able to do what they can to repair the harm they have caused.

View a recent video of Lisa Bedinger (starts at minute 18:30) talking about the work of the South Burlington Community Justice Center in northern Vermont.