The IIRP's International Conference Takes the Next Step: Restorative Communities 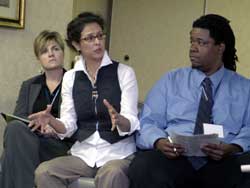 The eighth International Conference on Conferencing, Circles and other Restorative Practices, "The Next Step, Developing Restorative Communities, Part 2," was a big success, according to participant feedback. The conference was held in the IIRP’s hometown of Bethlehem, Pennsylvania, USA, on October 18-20, 2006. More than 300 people joined in the three-day event, from Australia, Belgium, eight provinces of Canada, Costa Rica, England, Hungary, Ireland, Israel, the Netherlands, New Zealand, Northern Ireland, Norway, Scotland, South Africa, Sweden, Taiwan and 25 states of the USA, plus Washington, D.C. and Guam.

In the plenary sessions alone, four nations were represented: England, Scotland, Israel and the USA. More information on the conference, including the schedule, papers and participant comments are available here: http://www.iirp.edu/beth06/index.html.

As is always true at IIRP conferences, a feeling of community quickly developed among participants. Although most had never met before, attendees found that they had plenty to talk about regarding their restorative work, doing things with young people and adults, not to them or for them.

The enthusiasm for learning and sharing was palpable in and out of the official presentations. Many "breakout sessions" spilled into overtime as people compared notes on the nitty gritty of their restorative work. To cite one instance, the session: "Communities Within Communities: A Partnership Between a School-Based and Court-Based Restorative Program," led by Virginia Wiley of the Bluewater School District in Ontario, Canada, became a discussion about the issues session participants were facing implementing restorative programs in their own communities.

There were some notable trends at the conference. One is that people and groups are already taking the "next step" of the conference title: across the world, restorative communities are actually taking shape. To single out two of many:

The aforementioned Bluewater School District has partnered with the Bruce and Grey Counties Catholic District School Board and the court-based Owen Sound and Area Family YMCA Youth Justice Circle Program to jointly oversee "restorative measures conferences," to hold youth accountable, provide opportunities for them to learn the impact of their actions and make amends, with the goal of maintaining safe, positive schools and community.

The Restorative Community Foundation and Abundant Life Ministries of Charlottesville and Albemarle, Virginia, USA, (http://www.restorativecommunity.org) are developing a strategic community plan for restorative practices, based on the Centre for Justice and Reconciliation's RJ City.

Good cheer at the pre-conference dinner

Christa Pierpont, Dylan Rosenthal and Reverend Eddie Howard shared how they are working with faith, school and mental health community networks, plus law enforcement and courts, to train leadership groups in restorative practices. Abundant Life Ministries has adopted restorative practices in its work with families and police.

On a larger scale, New Zealand is on track to become a restorative nation. As Julia Hennessy and Alison Hill of the New Zealand Ministry of Justice explained, although known for the extensive use of family group conferencing in child protection and youth justice, wherein an extended family gathers to address a family's issues, New Zealand has also published positive evaluations of several pilots utilizing restorative justice conferencing with adult offenders for both serious and minor offenses. The Ministry of Justice is now beginning to roll out restorative justice on a more widespread basis: in police adult diversion, pre-sentence in serious offending and pre-release from prison.

An upsurge could also be noted in the spread of restorative school communities. To cite just two:

In the Rozelle Public School, a diverse primary school in Sydney, Australia, restorative practices have been embedded as a way of being, teaching and learning. Rozelle principal Lyn Doppler, currently traveling the world on a Winston Churchill Fellowship to examine the effects of restorative practices in schools, talked about how culture, achievement, community connectedness and parent involvement at her school improved through whole-school implementation of restorative practices. Rozelle recently won the Director General's Award for Outstanding Achievement in Being and Learning Together (https://www.iirp.edu/images/pdf/beth06_doppler.pdf).

The Kawartha Pine Ridge District School Board, in southeastern Ontario, Canada, is implementing restorative practices across the board. Superintendent of student achievement Maureen Moloney, student behavior support officer Stan Baker and Brookside Detention Center chaplain Bruce Schenk shared how they are bringing restorative practices to the district. Beginning by training selected administrators, then police, child and youth workers and behavior support officers, then teaching and other staff, they subsequently introduced the practices to students and parents. Initial success building positive culture in schools and the wider community has encouraged them to persevere and spread the practices more widely.

An especially moving feature of this conference involved presenters who came to share their instinctively restorative responses to personal tragedy. Wendy Cohen and Karen Berryhill, both of Colorado, USA, lost a child to murder within five months of each other. Both told their stories, including details of the murders and the aftereffects, the court systems' failure to help them, and the founding of their group "Moms Living with Murder," which is dedicated to educating others about what it is like to experience such tragedy and empowering people in similar circumstances. Neither woman has yet met face to face with her child's murderer, but Wendy's relationship with the mother of her daughter's killer has helped her greatly with the healing process (https://www.iirp.edu/images/pdf/beth06_cohen.pdf). 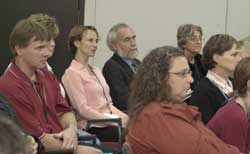 Raw emotion is reflected on the faces of participants at “Bringing Peace, Healing and Promise to Both Sides of Violence,” led by Wendy Cohen and Karen Berryhill. Photo by Thomas KosaKaty Hutchison, whose husband was murdered, also came to restorative practices intuitively. Katy talked about her experiences in the wake of her husband's death at the hands of a boy who was drunk and unsupervised at a local party. Ultimately she would have a face to face meeting with the boy, Ryan Aldridge, which changed both their lives. Katy has since become a very active advocate for restorative justice, touring her native Canada and the US to speak about it, sometimes accompanied by Ryan. She has also authored a book, Walking After Midnight: One Woman's Journey through Murder, Justice and Forgiveness (http://www.katyhutchisonpresents.com).

Many conference participants also reported being very moved by the presentation given by Major Bill King and Frank Leonardi of the Salvation Army Correctional and Justice Services "OK Kids" Group, of Moncton, New Brunswick, Canada. In their work with children who have parents and other relations who are incarcerated, they are building a restorative community. By sharing their stories and feelings and determining their own norms, with the more experienced children modeling the culture for newer arrivals, these children and youth are helping each other communicate better, be part of a community, learn about choices and responsibility and build self-esteem. Families are also becoming more and more involved in the process (https://www.iirp.edu/images/pdf/beth06_leonardi.pdf).

The work of all the conference participants is worthy of coverage. There will be more reportage on several of the presenters mentioned here, as well as others, in the coming months.

At the closing ceremony in the Central Moravian Church sanctuary, conference participants shared aloud their reflections on the past three days. One could sense a reluctance to let go of the feeling of excitement and community that had been generated at the conference. Even after the final lunch, when people began drifting off home, the enthusiasm remained. The following exchange was overheard between two educators leaving the conference: "Let's go shopping." — "OK, as long as we can keep talking about restorative practices!"