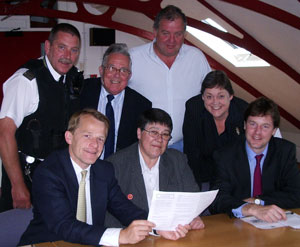 The people of the neighboring towns of Chard and Ilminster, in Somerset County, England, have taken justice in their community into their own hands. They established the Chard and Ilminster Community Justice Panel (CICJP) and are handling local cases themselves, in a restorative manner, with decidedly positive results.

What makes the CICJP different from other community justice boards is the restorative process. As in restorative conferences, as practiced by the IIRP, the CICJP brings victims, offenders and their supporters together face to face to deal with the consequences of an offense and decide how to repair the harm. Victims tell offenders how they have been affected by an offense, and offenders have a chance to take responsibility and make amends. Supporters express themselves, too.

The CICJP is made up of trained community volunteers and coordinated by Valerie Keitch, who has an extensive probation and prison work background. Three volunteers and Keitch attend each panel; the chair asks the restorative questions. At the end, offender, victim, panel chair and Keitch sign an Acceptable Behavior Contract, which Keitch called “a conference agreement with a bit of legal bite.”

Before each CICJP meeting, Keitch visits offenders and victims separately, asking restorative questions and making sure that they understand that the panel is a safe place. Offenders must take responsibility for their actions prior to the meeting.

Police refer cases to the CICJP, “from violent assaults to mindless criminal damage to persons who’ve been drunk and disorderly and have caused harassment or alarm. Also neighbor disputes,” said Constable William Geddes, of the Chard police. The panel has heard about 60 such cases since January 2005.

The idea for the CICJP evolved after the British government shut down many rural courts. Trials for offenses in Chard and Ilminster were moved far away, so local newspapers couldn’t cover them, and people didn’t hear the outcomes.

“It was assumed by the community that everybody got away with these crimes, because nobody could see justice being done,” said County Councillor Jill Shortland, initiator of the CICJP. The police’s reputation deteriorated, “because people’s perception was that they weren’t doing anything,” said Shortland, so the local crime rate increased.

The final straw was a murder, a rare occurrence for a small town like Chard. The trial venue was switched from one distant court to another at the last minute, making it impossible for the Chard and Ilminster News to cover it. Their column “Bring Justice Home” expressed the community’s dissatisfaction.

In response, Councillor Shortland conceived of the CICJP. She brought the idea to the Home Office (the UK government department, responsible for internal affairs) which eventually funded an 18-month pilot.

Initially 35 panelists volunteered. Keitch and an implementation group devised a training program “drawing heavily on material from the Youth Justice Board and other restorative justice work.” Although some volunteers were initially rigid and envisioned themselves passing judgment, for the most part, Keitch said, people were not as punitive as she thought they would be. Training also included communications skills, role-plays and practice asking restorative questions.

The panel’s first case involved a man who drove too fast past the local Speed Watch—volunteers who register the speed of cars going by with a radar gun and report it to police. The driver got out of his car and violently threatened the speed watchers; they called the police, who came to the scene.

“The people involved all knew each other—went to the same church and pub,” said Keitch. “Word of the incident spread throughout the community and divided it.” The police called Keitch, thinking this would be a good first case for the CICJP.

Keitch visited the offender first, and all the reasons for his behavior came out. A retired police officer who’d spent 30 years as a London cop, he was devastated by the way he’d behaved. He and the victims agreed to come to a panel.

“At first it was very painful for everyone, but then the man told them everything, and the whole mood changed. All the victims wanted was an apology, and to know his behavior wasn’t personal. He couldn’t apologize enough. At the end, they asked him if he wanted to meet for a drink. Eventually they asked him to join the Speed Watch team, and he did. They became firm friends.”

Keitch is very pleased with the panel’s performance. “Out of 50 cases we’ve done [as of March 2006] only two orders have been breached. As a probation officer, I would have been delighted with that record.”

A community-wide assessment of residents’ perceptions of safety and of the police, performed after the panel had been operating for a year, showed great improvement in both areas.

Evaluations performed with participants after each panel showed that “offenders felt that the police were really good—not just good, really good,” said Shortland. “Nowhere else in any other justice system does an offender think highly of the police officer that’s arrested him. That’s because the police have given them the choice to take responsibility.”

Said John Lacey, CICJP volunteer and chair of the implementation group, “Everybody we’ve dealt with, even the perpetrators, have said to us afterwards, ‘We think this is a good idea.’ It also lets the victim have their say. When the perpetrator apologizes to them face to face and offers to repay damage, it goes a long way toward restoring the community.”

The police are also happy with the CICJP. “It has helped tremendously in building bridges between the community and the police,” said Constable Geddes. It has also reduced police workload by about 75 percent. Geddes explained: “Now officers don’t have to take a statement or interview, they just get a simple admission of guilt form signed, which comes to me. I spend about an hour on it.”

The CICJP has attracted a good deal of notice in the UK. Lord Justice Thomas, Senior Presiding Judge of England and Wales “came to visit and liked what we were doing very much,” said Keitch. And the panel won an award for “outstanding achievements in engaging communities” from the Avon and Somerset Criminal Justice Board.

The Home Office is also paying attention. “They’re used to putting six million pounds into something and the community still hate the police. Our project has cost sixty thousand and has achieved more than projects costing six million,” said Shortland. “They’re used to projects with a 70 percent reoffending rate that they consider a success. We’re delivering 95 percent success.” The Home Office has funded the CICJP for another year.

In most cases heard by the CICJP to date, the panel chair has asked the restorative questions and then asked the other two panel members if they want to ask the offender and victim any more questions. Thus, said Keitch, the CICJP has not been doing “pure conferences.” But after being trained in restorative conferencing by the IIRP, she was so impressed with the process that she began using it with the CICJP.

“It’s working exceptionally well, better than the panel, with me facilitating a circle,” she said. “We’ve been incredibly successful, but I made it clear when I took the post on that it would evolve, and that their original concept of having a justice panel made up of three people might not continue forever.”

Keitch recently facilitated a restorative conference around a neighbor dispute. One woman, a homeowner who runs a day-care center in her home, wanted her neighbor, a renter and an elder-care worker, evicted due to barking dogs and kids on motorbikes. The renter claimed that the homeowner’s day-care clients’ cars always blocked her driveway. Keitch talked to both women, who agreed to come to a conference.

“It was wonderful. I followed the [IIRP] Real Justice script to the letter. About three quarters of the way through, the ‘victim’ said to the ‘offender,’ ‘I didn’t actually know what you did for a job. I think you care for my great aunt, and she thinks you’re wonderful!’ So I just gently said, ‘How are you two going to resolve this?’ So the lady with the dogs said she’d take them elsewhere and that she’d find another place for her kids to ride the bikes. The other lady said she’d ask her mothers to use the parking lot across the street. They ended up giving each other a hug and apologizing. It all got a bit tearful, and they trotted off home together.”

Keitch took the IIRP UK (Real Justice) Training of Trainers course in June 2006, so she can train other CICJP members to facilitate conferences. It's clear to her that "conferencing circles are the way to go," and the panel is excited to follow her lead. What's more, municipalities all over England have been inquiring about the CICJP, eager to emulate its success. With the support of IIRP UK, Keitch plans to train them in restorative conferencing and help spread the practice to community justice boards throughout the UK.