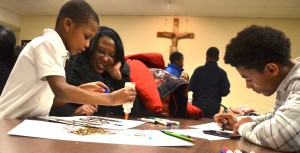 As director of school climate in the Archdiocese of St. Louis, Lynne Lang is committed to blending restorative work with the mission of the church.

“The Old Testament reveals in the creation story that God never intended for us to be alone. We are wired to live in community,” says Lang. “What better way to live that message than by working on continuous improvement in the quality of those relationships at every level in our lives?”

Unlike traditional character education, which is determined by social context, VBRD is based on virtue, whose values are intrinsic, says Lang. And while VBRD focuses on the virtues expressed in the teachings of the Catholic faith, Lang points out that that the cultivation of virtue predates Christianity. The universal virtues encompassed in VBRD include such principles as Empathy, Conscience, Compassion, Self-Control, Respect, Kindness, Tolerance and Fairness.

Lang appreciates the way study of the virtues can connect discipline and religious studies. “It’s no longer a case of saying we have all these subjects and, oh, now we have religion class. The dialogue becomes about who we are,” says Lang. Behavior changes as a result of students’ sense of self, learned through study of virtue. “It’s from the inside out,” says Lang. “Because of who I am, this is what I do.”

In the VBRD program, students research each virtue. Teachers help them reflect on their practice of the virtue and observe of how it is evident in others. Students then explore specific aspects of each virtue in weekly classroom circles.

The goal is for students to achieve what Lang calls “virtue literacy,” which she believes needs to go hand in hand with “emotional literacy.” Lang believes students improve the quality of their relationships when they empathize with other students’ struggles around virtue, and they discover more about each other.

One group of students used a circle to plan how they would reflect the virtue of compassion in their community. They decided that not only would they produce personal care kits for a people in a local homeless shelter; they would also include a personal note from each student in the kits to explain the virtue they were learning. Another group did a similar project for a local nursing home while exploring the virtue of kindness.

Parents are also engaged in the VBRD program. At the beginning of each school year, parents are invited to attend circles and trainings about the virtues. Then they work on virtue-based projects at home with their children.

One school asked each family to choose a virtue and create a family shield exemplifying how that virtue is expressed in their family. The shields were hung in the halls of the school. Finally, the shields were taken to the parish community and included in a Sunday celebration ceremony.

These kinds of projects, says Lang, give parents a chance to have ongoing conversations with their children and school staff that uphold the guiding principles of VBRD.

As a result, in schools implementing VBRD, students spontaneously perform acts of kindness to one another and give heartfelt apologies when harm is caused. One mother told a story about when her 14-year-old son actually instructed her about a half-hearted apology she had made to him. This opened a conversation about ways to strengthen their relationship.

A local journal relates this story: When a mother was driving her daughter and several other girls, the conversation turned to gossip about a child who was not in the car. “One of the kids in the backseat piped up, ‘You know, this kind of talk is not very virtuous.’ The other girls responded with, ‘You’re right,’ and changed their conversation to another topic” (Kurt Nelson, Ph.D., “Brimming with Hope Column,” St. Louis Review, June 22-28, 2015).

In 2010, VBRD was piloted in five schools, which have fully integrated the program. Since then, about 100 more schools nationwide and in Belize, Central America, have now been trained to implement the model. Our Sunday Visitor Publishing has published a comprehensive guide on VBRD, which has the imprimatur of Archbishop of St. Louis Robert J. Carlson.

Lang is enrolled in the master’s degree program of the IIRP Graduate School. "The instruction, reading and discussion with other professionals fills a great need for me and provides the opportunity for others to grow from my knowledge as I learn more in this emerging field,” she says, adding, “I get ideas I can immediately apply.”

Learning about the social discipline window and wanting to stay in the “with” box has caused Lang to think more broadly about the processes she facilitates to resolve harm. She has also been employing circles to break cycles of harm, instead of dealing with issues on a piecemeal basis.

In fact, children have been asking to include their parents in discussions to address bullying. A parent with the best intentions may tell their child to just stay away from another child who is bullying or resort to gossip and blame. But bringing everyone to the table changes the conversation. “The dynamic is so powerful,” says Lang. “Everybody has to listen to the children’s point of view and then work to make a better future right along with their kids.”

Restorative practices, faith and virtue all honor the dignity of the person, explains Lang. “There is a core of dignity in each person. When we commit to finding and honoring that, it is restorative.”