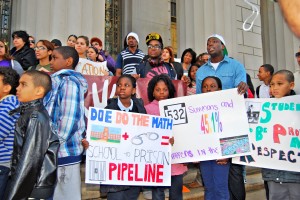 Photo by Emmanuel Yusuf, Huffington PostHere are two articles about on the ground responses by student groups calling for new approaches to school discipline that will not disproportionately harm minority students.

YUC student Tone Elliot lays some of the blame for Philadelphia's suspension rates on the District's choice to prioritize security over student support services.

"When you are in a classroom with outdated books and you have two counselors in a school of 700 students, a student doesn’t believe that you care about them. They see brand new cameras and metal detectors in a school and it makes them feel like criminals."

As an alternative, the students urged City Council to promote a new MOU that would support the implementation of Restorative Practices.

"Restorative Practice provides a way to prevent confrontation without a suspension, expulsion or over the top punishment," said YUC member Rosa Gonzales. "It creates climates of respect where all youth can feel safe and respected no matter their race, religion or sexual orientation."

On March 27th, YUC students and community members will testify about these issues before City Council.

And then there's this piece from Dinu Ahmed in the Huffington Post, "Bronx Youth of Color Most Vulnerable to School Arrests and Summonses," which discusses a protest by students, parents, teachers and elected officials protesting the number of school-based arrests in the Bronx, New York.  A new report shows that "93.5% of the nearly 300 students arrested [in New York City during a 3-month period] were either Black or Latino."

Here again students spoke out on their own behalf:

The press conference began with Frank Rivers, an 18-year old Bronx student, and member of Sistas and Brothas United. "We know low-income students of color are being criminalized by being suspended and arrested in our classrooms. Discipline should be handled by school staff, not NYPD cops."

Attorney Andy Artz of Legal Services NYC-Bronx laid out the situation from his point of view and advocating the restorative practices be implemented as a more positive response to wrongdoing in schools:

"Many of the young people I've represented in long-term suspension cases were also arrested in school. These are not just older teenagers getting arrested; many of my seventh and eighth grade clients have been arrested for things like fighting in school, or for resisting when a School Safety officer attempted to take them to the office. Some of these students are in special education, and struggle to respond appropriately to authorities. We need to change the policy that permits so many children to be arrested in our schools. Instead of suspensions and arrests, our schools should be using positive alternatives, such as restorative practices, which foster a culture of safety, respect, and dignity."

The article notes that many of the participants of this event are part of the Dignity-in-Schools Campaign, with which IIRP has long had a relationship. Read that full story here.