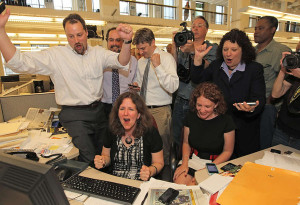 Inquirer staff celebrate their Pulitzer Prize for public service. (MICHAEL BRYANT / Inquirer Staff Photographer)The Philadelphia Inquirer has won a Pulitzer Prize for its seven-part series last year, "Assault on Learning." The article "revealed that violence in city schools was widespread and underreported, with 30,000 serious incidents over the last five school years. Those findings were later corroborated by a Philadelphia School District panel on safety, spurred an overhaul of incident reporting in the district, and prompted hiring of a state-funded safe-schools advocate." (See "Inquirer wins Pulitzer Prize for school violence series" by Inquirer staff writer Mike Armstrong.)

The Restorative Practices program, which focuses on treating students with respect, repairing harm done by violence and fixing problems, was credited, in part, with turning West Philadelphia High from one of the city's most dangerous schools into a much calmer place.

But after a district shake-up of the school, the program - which focuses in part on offenders taking responsibility for their actions and facing their victims - is gone and violence has inched up. The school's violence rate was 2.3 per 100 students as of Dec. 31, up from 1.1 in the same period last year.

Students also see value in the program, which is not found in any other district school. Bailie's group, however, just received funding for some training at South Philadelphia High.

The student group Youth United for Change recently called on the district to implement Restorative Practices "in all schools."

Another student organization, the Philadelphia Student Union, has launched the "Campaign for Nonviolent Schools," which calls for proactive anti-violence programs such as Restorative Practices, more student supports, and youth voice in school safety teams. Organizations around the city have signed on to the campaign, which the district has vowed to support.

Restorative Practices - which costs about $50,000 per school for a two-year training - is also used in Mastery Charter schools in Philadelphia and in Baltimore, Detroit, New York City, and Tucson, Ariz., districts.

"In Philadelphia, if we had some traction on funding, we'd have many schools lined up to work with us already," said Bailie, director of trainers at the International Institute for Restorative Practices. "When there's high-level support and a plan to carry out a program, it can really make some dramatic changes."