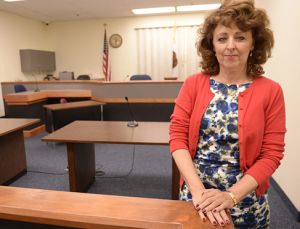 Julie Hilt, executive director of the Solano County Bar Association (Photo by Joel Rosenbaum for the Vacaville Reporter)The Solano County Bar Association (California), headed by Julie Hilt, executive director, is working to implement a restorative justice program for at-risk youth in the county, and also develop partnerships for building community with schools and others.

“We’re going to start with kids in diversion from the courts,” said Hilt. Later she hopes to apply for grants so the program can be developed to include adults in the criminal justice system and the jails.

The process of starting the program has involved building relationships and support with all the stakeholders one person at a time.

“I started with the probation chief, who happens to teach restorative justice at an online university,” Hilt said. “I met with all the police chiefs in the county. One local police chief had been involved with a restorative justice program previously in another city. I met with the district attorney, who is very concerned with the education of young people in the county and graduation rates, and the public defender, too.”

While it's main focus is to restore the community and promote healing after a crime, the process has additional benefits, such as increased restitution for victims, greater satisfaction with the system and potentially lower recidivism.

"We think it's a really, really good idea to stop or reduce recidivism by having those that harm others face those that they've hurt," said Fairfield police Chief Walt Tibbet.

Hilt agrees. “It’s really important when [victims can] understand what caused this individual to commit this crime. Oftentimes kids don’t have support, and have to raise themselves. They don’t have a lot of encouragement.

“When victims understand what caused them to commit a crime, that they weren’t targeted personally, it builds community. Sometimes the victims turn around and want to help the offender get back on their feet.”

Interest for the training was very high, and eventually the number was capped at 50 and a waiting list made. The attendees included community volunteers who will facilitate restorative conferences for the new restorative justice program, probation officers, police, principals, vice principals, counselors and teachers from several local high schools as well as a minister.

Hebling said, “The take away for me was that all three crowds – law enforcement, justice volunteers and schools – are equally engaged in wanting to utilize the conferencing process to address school issues, community issues and police issues."

Skepticism during the training about the conferencing process working was the exception rather than the rule. Hebling said, “One of the police officers, even at the end of day two, was skeptical, but appropriate and respectfully challenging. He said, ‘It’s my job to keep the community safe, and I’m not completely convinced this will do that.’”

But for everybody else, Hebling said, “The training was a kind of ‘aha.' People said, ‘I thought restorative conferencing would be a pigeon-holed kind of response, but I can see how widely it will be applied.’

“People saw connections and the ability to support one another with conferencing. The volunteers said, ‘I would come to your school and run a conference if you wanted someone absolutely outside the direct community of the school to do that.’ That kind of camaraderie was quickly built. All three schools expressed interest in training their broader staff in basic restorative practices.”

Hilt said most of the evaluations for the training in October showed 100% satisfaction, others 90%. “People are asking when we’re going to start,” she said.

Presently the stakeholders are drafting a memorandum of understanding to agree upon protocols. They need to agree that what happens in the conference stays in the conference and will not be used against youth in any court proceedings. Hilt hopes the program can begin running conferences early next year.

“We all have to live in community together,” said Hilt. “Rather than live in fear of each other and board ourselves up, we need to realize that it really does take a village to raise a child.”