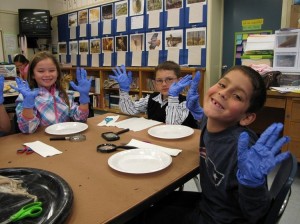 Students pose during "Squid Dissection Day" at Two Rock Elementary School, where Mike Simpson is currently superintendent and principalBack in the late 1990s, Mike Simpson, then a middle school administrator in South Burlington, Vermont, pioneered the use of Real Justice restorative conferences in schools. He also trained to be a trainer with the IIRP. At the time, the state of Vermont was experimenting with new ways to administer justice (see last month’s, “Serious Offenders Make a Change,” for more on Vermont’s cutting edge restorative programs and history), and Simpson was involved not only in conducting restorative conferences, but was training teachers, school counselors, DAs, state police and corrections officers to run them, as well.

Recently Simpson got in back in touch to say that he had moved to the West Coast over a decade ago. He wrote, “RJ is beginning to get a toe-hold in Sonoma County where I work as a Superintendent/Principal” of Two Rock Elementary School in Petaluma, California. He is now in the process of helping to bring restorative practices to the 40 school districts of Sonoma County.

Though few were aware of the restorative movement at the time, Simpson started conducting restorative conferences again when he was principal of Petaluma High School. Some time after the terror attacks of September 11, 2001, a high school junior made a comment in school that one of his classmates was “harboring terrorists in his basement.” Simpson responded by convening a formal restorative conference with the boy who was accused of harboring terrorists, the boy who made the comment and both of their families. He brought them together and used the scripted conference process to explore from all perspectives what had happened, how each had been affected and what could be done to repair the harm.

“The most profound thing came out of it,” Simpson reflected. “One of the mothers got very upset and told a story about when she was in college and traveling abroad. There was a terrorist event she experienced as a victim. She had buried all those feelings and never addressed it. It all came up when she heard about this comment that was made. Everyone in the room was so taken by this; everybody got it. The kid who made the comment apologized. The families were very moved.”

Simpson continued to employ conferences from time to time, though in his current role as an elementary school superintendent and principal, Simpson says he has had less need to run formal conferences with students. However, he has run conferences for parents.

Two mothers, good friends who volunteered in the same classroom with their kids, became embroiled in a serious argument over what amounted to a misunderstanding. At the request of one of their husbands, Simpson decided to run a conference with the two sets of parents and the school social worker to repair the harm and come up with a plan to avoid this kind of conflict going forward. The conference ended with a written agreement that the parents would 1) restore their friendship; 2) continue volunteering, provided both moms were present in the class at the same time and 3) maintain confidentiality about the conference and the precipitating incidents. They also agreed that if the mothers wanted to meet and talk about an issue during school time, a third party would be present.

While the responsive aspect of restorative practices often gets the most attention, Simpson says he has always focused on the more proactive aspects. In his role as principal, he has placed particular emphasis on building relationships with students.

“I used to use informal opportunities with kids at the high school to build relationships that would serve me later on,” he said. “I might walk up to a group of kids and say to one of them, ‘What are you doing this weekend?’ ‘Nothing,’ they’d say at first. ‘Oh, come on. What do you do? Do you like to fish?’ Sometimes the kid would light up. ‘Yeah,’ he’d say. ‘Where do you fish?’ ‘Lake Sonoma.’ ‘Got a boat?’ and so on. The next week when this boy is about to get into a fight, we have already talked about fishing. I can say, ‘Hey, don’t get into a fight,’ and he knows me and will listen.”

He added, “I have found that music is one of the best ways to talk to kids. I’d try and pay attention to the kind of music high school kids are listening to as a conversation starter.” One day a smart-alecky 17-year-old was really pushing Simpson’s buttons. He told the kid to go sit in his office while he took a moment to walk and cool off. When he got back, the boy had turned out the light, was sitting in Simpson’s chair and had his feet up on Simpson’s desk, expressing total disrespect.

But Simpson had cooled down on his walk and made a decision not to take the bait and erupt. Instead he noticed the logo on the boy’s tie-dyed shirt and said, “You like the Grateful Dead?”

The student was taken aback for a minute. “It’s not the Dead,” he answered. “It’s Phil Lesh [the bass player for the Grateful Dead]. He’s my uncle.”

That exchange broke the ice, and they were able to talk about the boy’s behavior. In fact, Simpson said, “I got close to this kid after that. To this day, his dad thinks that was the turning point for his son.”

What made that interaction restorative, said Simpson, was that it was about meeting a person where he is and giving him a voice. “Being vulnerable” is a key piece to being restorative, he adds: “Open a little. Change the lens. Just be human.” But that does not mean giving up control or diminishing your authority. Said Simpson, “This incident made me realize that as a school administrator, you’re in a very powerful position, but you can use your authority in a very positive way. You can build relationships and still be in charge.”

Not all principals or teachers are able to make this kind of connection. Simpson said an all-too-common problem has to do with principals and teachers who actually abuse their authority, perhaps unintentionally, remaining aloof. For instance, a teacher, frustrated by a student, might say something to embarrass a student in class. Or an assistant principal might consistently give certain kids a dirty look when he thinks, but doesn’t really know, what they might be doing. Then, when a student acts out, by swearing at a teacher or pulling a prank at the school, they are sent to the office and punished.

Simpson continues, “Then the kid comes to me in tears and angry, saying ‘That teacher, or assistant principal, was picking on me all year.’ ” In those situations he would sanction a student who acted out in these ways. But when he had a feeling the adult involved had also played a part, he would make a meeting between the suspended student and the teacher or assistant principal a condition of return. The teacher might argue, “But I don’t want to meet with him!” Simpson would insist, though, saying, “He’s going to be back in your class in a week, and you’re going to have to face him then.”

These informal conferences give the parties a chance to repair their relationships. The adult has an opportunity to explain the problem from her point of view and to ask the student to take responsibility. At the same time, the student’s voice can also be heard. That gives the adult an opportunity to acknowledge her piece in contributing to the strained relationship, too.

Simpson says that the essence of his practice is letting people — kids and adults — maintain their dignity. “People often say, ‘It’s not what you say, but how you say it.’ That’s really true, especially in intense situations,” he concludes. “More often than not, the outcomes of conflict and wrongdoings can be resolved by just being straight with people, without stripping them of their dignity.”