Miguel Tello, Representative for IIRP Latinoamérica, has been elected to the IIRP Board of Trustees.

“I am delighted to be able to serve on the Board,” says Tello. “I have great respect and admiration for the IIRP and its efforts to make our world a more restorative place.”

Originally from Mexico, Tello now lives and works in San Jose, Costa Rica. He first got involved with the IIRP when he contacted IIRP founder Ted Wachtel for permission to translate Wachtel’s article “Restorative Justice in Everyday Life” into Spanish to use at a Prison Fellowship International conference. Tello then took IIRP trainings and became an IIRP trainer.

As executive director of the Strachan Foundation, a small family foundation established to promote social investment in Latin America through small grants awarded to NGOs (nongovernmental organizations) in six countries, Tello offers restorative practices training to organizations throughout the region.

In Nicaragua, Tello trained the staff of AMOS Health and Hope, which provides primary health to vulnerable rural populations. AMOS staff use circles to communicate with one another and to work through conflicts that arise in villages where they aim to build clinics. In Panama and El Salvador, two organizations, Fundacion Amaneceres and Fe y Esperanza, respectively, offer programs for youth that combine circles with theater. 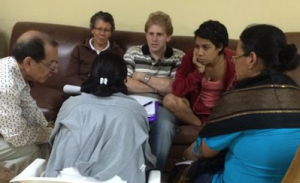 Participants from ESPERE in Cuba discuss a circle scenario during a recent training.Tello has begun expanding beyond Central America, as well. Most recently, he and colleague Natalie Medina, from Fundacion Amaneceres, in Panama, traveled to Cuba to offer restorative practices training for Escuela de Perdón y Reconciliación (School of Forgiveness and Reconciliation). ESPERE works with victims of crime in groups, providing them opportunities to verbalize what they would say to the offender were they present, and to reflect on what could have caused the offender to act the way they did. Restorative practices are seen to be consistent with ESPERE’s mission.

Tello also does extensive work with schools. He and his colleagues will provide Introduction to Restorative Practices and Using Circles Effectively trainings to 93 teachers at the Blue Valley School, a private school in Costa Rica that wants to refocus its discipline practices away from administration to teachers themselves.

Tello says he “hopes to bring his experience of working with a variety of NGOs in Central America to bear on the discussions of strategy and in the decision-making of the IIRP Board of Trustees.” He adds, “I hope to bring the Latin American perspective to the IIRP Board of Trustees and to raise awareness about the context of Latin America and the beauty of its diverse cultures.”