Graduation at a CSF Buxmont School: A Triumphant Step into the Future 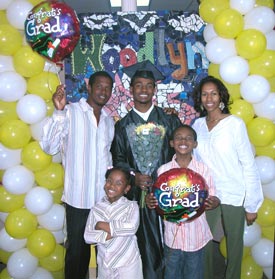 Ken, a jubilant graduate of CSF Buxmont, poses with his family.On June 12, all the Community Service Foundation-Buxmont Academy alternative schools held their graduation ceremonies. I attended one at CSF Buxmont’s Woodlyn center. This was no ordinary graduation, and CSF Buxmont schools are not ordinary schools. The Woodlyn center, one of eight CSF Buxmont schools located throughout eastern Pennsylvania, USA, serves youth in grades 7-12 who, for one reason or another, are having trouble in other schools. These students have been referred to CSF Buxmont by their former schools or probation or children and youth departments, but the students themselves have made a commitment to come to CSF Buxmont and work on whatever brought them there in the first place.

There have been other eForum articles about CSF Buxmont schools and programs that readers may recall reading. (CSF and Buxmont Academy are sister organizations to the IIRP.) I wrote “A Day at a CSF Buxmont School” after visiting the Bethlehem center for the first time. I was so deeply affected by what I saw that day that I ended up leaving my job as a newspaper reporter and going to work at CSF Buxmont.

Back to Woodlyn’s graduation. About 60 friends and family members gathered to see three young men graduate and 21 other young people receive certificates of completion, honoring the number of successful days they’d spent at the school. To the strains of “Pomp and Circumstance,” Woodlyn’s staff of counselors, teachers and tutors filed into the room, followed by the students-the graduates in caps and gowns.

“At CSF Buxmont there are no suspensions,” Woodlyn’s coordinator, Jen Barvitskie, told the crowd, in her graduation address. Instead, she explained, students are expected to participate as community members and respond to and offer feedback to each other. “Students are more likely to listen to each other,” she said.

Barvitskie was describing the approach that guides all CSF Buxmont schools, foster group homes and drug-and-alcohol and supervision programs for youth. Called “restorative practices,” the approach aims to enhance relationships by engaging people in participatory learning and decision making. Staff empower youth to take responsibility for their own behavior, make decisions, solve problems and support one another in their personal growth.

Restorative practices has made a difference in the lives of many thousands of adolescents who have participated in CSF Buxmont’s programs over the past three decades, since its first school was founded in Sellersville, Pennsylvania, in 1977. Formal research, which was featured in our eForum and presented to the American Society of Criminology, confirmed this difference, showing positive outcomes for youth who participated in the “restorative milieu” of CSF Buxmont schools, in three areas: lower offending rates, high program completion rates and positive changes in attitude: View here. This 1999-2001 study was replicated in 2001-2003: View here.

What I saw on June 12 at CSF Buxmont in Woodlyn backed up that research in a very concrete way. Here are brief stories of the three young men I saw graduate that day.

Curtis, 18, said he got into trouble at his old school for fighting with kids in rival gangs, but at CSF Buxmont he decided to “do what he needed to do.” Fighting, he says now, is “stupid.” At CSF Buxmont, he focused on his schoolwork (math is his best subject) and took part in groups where he learned to express himself, even though that was hard for him. He did it, he said, for his mom and his girlfriend. Now he wants to go to school to become an architect. He plans to build himself a big house with an indoor basketball court.

Curtis’s mom, April, cried as she presented him with his diploma during the graduation ceremony. “I’m so proud of my son today,” she said. “He had a hard time coming up. But now he goes to church, he plays the trombone. He wants to be an architect. I’m proud my son made it, and I love him.” Later, she said, “CSF helped Curtis get out of his shyness and make the right choices. Now he lets me know his feelings.”

Ken, also 18, said he used to have trouble controlling his anger and communicating his feelings. He used to threaten people, and he “had a lot of suspensions.” Since coming to CSF, he said, he doesn’t lash out at people anymore. He discovered that he likes to write songs and to work on computers. He learned to communicate to his peers, his counselors and his parents. He’s looking forward to going to college, working on computers and joining the Navy. He feels good inside, he said, because he’s accomplished something.

As Ken’s mom, Joan, presented him with his diploma, she said, “I’m so proud of Ken. It was hard but we made it through. I love you.” Ken’s smile was dazzling as he held up his diploma, posing for pictures. Afterwards, Ken’s stepfather, Richard, said, “His whole attitude has changed. Now he discusses his problems instead of acting out in anger.”

Warren, 17, said he got in trouble at his old school for spraying a fire extinguisher. He described his former self as shy and nervous, angry, uptight and arrogant. At CSF Buxmont, he learned that if he had a problem, he could get it off his chest and feel better. He even joined the student council and became “the second boss of the school,” responsible for organizing field trips and the school store. Now he’s happy and excited to be graduating, something he’s “been waiting for half my life.” He’s looking forward to working on his music and going to community college or joining the Navy.

Warren’s mother, Lana, presented him with his diploma, saying, “I’m so proud of you, son. You’ve come a long way. You were mean and hateful, but now you’re shining. Keep shining! I love you so much!”

Later, Warren’s father said that when Warren first started at CSF Buxmont, he was isolated and didn’t want to talk, had poor grades, a bad temper and no regard for authority. “I used to try to discipline him and whip him,” he said. “It made him worse.” Now, he said, “He’s a good kid. And he takes a leadership position. He’s got a lot of respect for people and his grades are all As and Bs.” Added his mom, “I used to try to comfort him. Now he hugs me and says I love you. And he’s funny!”

On June 12, 2006, at CSF Buxmont, three young men—angry and defiant “tough kids” who once could find no way out of the sorry trap they’d gotten themselves into—made their first triumphant steps into the future.