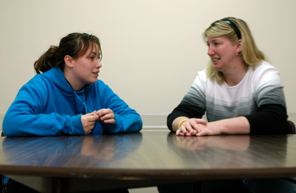 When teenagers turn to drugs and alcohol in ways that damage their lives and relationships, it’s challenging to help them turn their lives around. The choice to use alcohol and drugs can mask other underlying issues, including shame and other painful emotions, and can be exacerbated by the difficulties of communication. This article explores how everyday language can be used within a restorative framework to help parents of teens struggling with drug abuse and addiction to reintegrate in a healthy way with their families, schools, friends and communities.

Drug and alcohol counselor Elizabeth Smull, who has worked primarily with teens struggling with addiction and their families, uses the full range of restorative practices on a daily basis, especially many of the more informal practices, such as affective statements and questions. Beyond using these techniques, Smull actively teaches those she works with how to use these techniques themselves. This begins immediately after a teen has returned home from a drug and alcohol rehabilitation program or has been court-ordered to a period of juvenile probation.

“During the first meeting with families, I give out copies of the social discipline window and the affective questions, and we process those to give a framework for what we do at CSF Buxmont,” said Smull, who is a lecturer for the IIRP Graduate School and the coordinator of the Community Service Foundation and Buxmont Academy (CSF Buxmont) Supervision Program, one of the IIRP’s model programs.

The social discipline window shows family members that it is more useful to work with teens, rather than attempt to do things to them or for them. Smull said, “Whether a kid wants to get sober for the rest of their lives, or just for now, it’s got to be based on what they want to do for themselves rather than what someone else is telling them to do.” 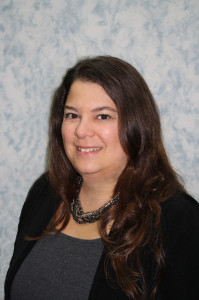 IIRP Lecturer Beth SmullSmull gives an opportunity for everyone in the family to tell their stories. This puts people at ease and demonstrates that she’s not there to tell people what to do. Instead, she is facilitating discussion that helps the family talk and listen to one another.

“When we start the initial session, I use the restorative questions. I ask teens what happened to bring them to probation or to rehab. I ask parents, ‘What were you thinking and feeling when your son or daughter was in active addiction? What has been the hardest thing for you?’ ” These affective questions help elicit responses about how people are feeling and how their actions affect others.

The philosophy and practice Smull brings to the table encompasses much more than drug and alcohol abuse. Once a teen stops using drugs or alcohol, they find they have to deal with their family and with many other issues. “There’s a whole layer of other things that happen when people get sober,” said Smull.

She once worked with an 18-year-old girl who was living with her twice-divorced mother and three younger brothers from her mom’s second marriage. The mom frequently left her daughter at home, without notice, to care for the boys. During one family meeting, the girl confronted her mom about this, but this led to shouting and screaming back and forth.

Smull took the girl outside and asked, “What’s going on for you? What are you thinking and feeling?” The girl said, “I’m scared and worried. I don’t know what’s happening when she leaves for so long, and the boys are scared, too. I’m also frustrated that this keeps happening and we never have a conversation about it.”

This brief private conversation with Smull gave the girl a chance to practice using affective statements. When she returned to the meeting the girl used the same language she’d just practiced to explain to her mother how she was feeling and how her mother’s absence affected her. Because she wasn’t being cursed at, and because the girl was using “I-statements,” her mom let her guard down and listened. The goal, of course, is for the family to continue being able to communicate with each other when the counselor is gone.

When working with parents who are worried about their teens continuing to use drugs and alcohol when they are in recovery or on probation, Smull coaches them on how to use restorative language to express their concerns. Often Smull will hear from a concerned parent who has noticed behaviors associated with substance abuse creeping back into their child’s life. Warning signs include a teen displaying a mean temper, an unwillingness to listen, lethargy and excessive sleep, hanging out with old friends, or not coming home on time. Maybe items have gone missing from the house.

Smull coaches parents to refrain from making accusations. Instead she suggests parents turn their concerns into affective statements. A mom might say, “Since you’ve been home, it’s really been positive, but I’m scared about some of the things I’m seeing. You talked back to me when we were getting ready for school, and I haven’t seen that in a while.” Smull said this approach makes it less likely that teens will be defensive. It can also open the door for more positive communication.

Similarly, a parent might want to demand that their child no longer socialize with friends who were fellow drug and alcohol users. Smull points out that the goal is to help kids make positive choices for themselves. She recommends parents make a statement like, “I’m concerned when you hang out with this particularly person, because you used to always get in trouble with them. I’d feel more comfortable if you, for now, focused on yourself or didn’t hang out with them, until you get a little more stable.”

“Ultimately parents will set the rules,” said Smull, “but in terms of the social discipline window and working ‘with,’ you have to say, ‘I want to help you change.’ If you help young people identify needs and leave space for dialogue, they come to many of the same conclusions we adults would.”

Smull also encourages parents to positively affirm the good changes when a teen starts to do well. A dad might say, “It was just so cool that you stayed in with us Friday night. I had so much fun just watching a movie together. In addiction that never happened.” And when a parent calls Smull to praise their child and the positive changes they’ve made, Smull makes a point to tell them to be sure to tell their child themselves what they’re thinking.

“These changes can be really huge,” said Smull. “A parent might tell me, Johnny helped clear dinner table without being asked five or six times. He went on a family vacation without any arguing. I tell them to let their kids know how that makes them feel and talk with them about how to say it.”

When adults begin to absorb this aspect of the restorative framework and consistently use of this type of language, teens begin to understand the impact of their behavior, both good and bad. This is a very important component of a restorative approach for helping teens on the challenging road to recovery.