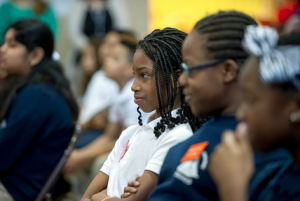 Photo by Maryland GovPics at Flickr Creative CommonsDisparities in out-of-school suspension and expulsion by race, gender and sexual orientation are a critical issue in our schools.

The Discipline Disparities Research to Practice Collaborative, a panel of 26 national experts — researchers, educators, advocates and policy analysts — presented to Congress on March 13 the most comprehensive compilation and analysis of research on exclusionary discipline ever attempted. Read the papers.

The Collaborative’s findings and recommendations support the Jan. 8, 2014, U.S. Departments of Justice and Education-issued federal guidelines on school discipline policies and practices, which propose best practices, including restorative practices, to improve school climate.

The Disparities Collaborative website contains papers on implicit bias, research showing that African American disproportionality cannot be accounted for by differences in student behavior, a myths and facts sheet on disciplinary disproportionality, links to other reports and a Resource Directory of organizations nationwide working on these issues.

International Institute for Restorative Practices faculty consulted with the Collaborative, which was sponsored by the Atlantic Philanthropies and Open Society Foundations and led by the Equity Project at Indiana University and UCLA’s Center for Civil Rights Remedies at the Civil Rights Project.

Coverage of this release in the U.S. press includes: