“Usually teachers do too much talking,” said Mike Selvenis, principal of Thomas W. Holtzman Elementary School. “Restorative practices give teachers a way to get out of the way of students. Circles help make the classroom a comfortable place to get conversation going.”

Selvenis has committed Holtzman Elementary, which serves grades three to five and is located on the outskirts of Harrisburg, Pennsylvania, USA, to school-wide restorative practices implementation. “From what I have seen,” he said, “the strongest implication is for the classroom. I see teachers utilizing circles for instruction and actually working on academics. Teachers are using circles to share information and have students report out from groups, talk about their beliefs and argue their points of view. ”

For a lesson on the American Revolution, one teacher divided students up into groups of Patriots and Loyalists, and they debated their sides of the issue, all within a circle. Some teachers have used the circle to help students get together and write essays. Teachers have also presented a statement by a historical figure to use as the starting off point for a class discussion in a circle format.

Students at Holtzman Elementary participate in a class circleSelvenis said every teacher incorporates a daily sharing circle into their classroom schedule. The emphasis is on the proactive, with an attempt to employ preventive, relationship-building activities 80 percent of the time. That way teachers are ready to respond appropriately the other 20 percent of the time when disruptive or inappropriate behavior happens in class, on the playground, in the cafeteria or even on social media.

Selvenis said he sees teachers responding to incidents using restorative practices all the time, and it is going more and more smoothly. He was recently with a couple of students and a teacher when there was a name-calling incident, a fairly common occurrence in an elementary (or primary) school. The teacher used the restorative questions. “She had to do much less of the talking now as opposed to last year,” said Selvenis. “It was quick; there was true remorse, and there was a genuine change in behavior after the name-calling.” 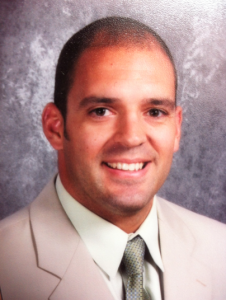 Principal Michael Selvenis takes the initiative to implement restorative practices with students, staff and parentsSelvenis doesn’t just expect teachers to build community and hold kids accountable using restorative practices. He holds himself to the same standard in the way he interacts with staff and parents. In terms of giving positive feedback to a teacher, he said he doesn’t just compliment them by saying they did a good job. He uses an affective statement instead to make it more personal. He has said, for example, “I really appreciate the effort you put into the IEP (an Individualized Education Plan, which sets out goals, services and accommodations for students with learning disabilities). You took time to explain the plan to the parent. I could see they felt good knowing that their child is in good hands.”

On the flip side, when a parent reported to him that a staff member upset their child by saying something that really wasn’t appropriate, he also chose an affective statement to respond. After checking with the staff to see if they had really said what the child and parent reported, he said, “That really embarrassed me. It challenged my relationship with that parent, and I’m disappointed.” In this way, the teacher feels respected, even while being held accountable. They are also given an opportunity to see the bigger picture: The way they talk to a child affects not only that child but several other people as well.