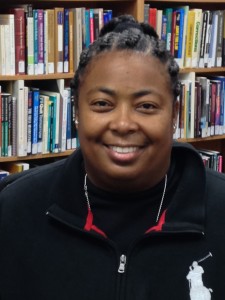 Once, gang fights, suspensions and expulsions were the norm at Markham Middle School; students were dropping out, and there wasn’t much learning going on. With the introduction of restorative practices, a culture change has happened in this school, located in the Watts neighborhood of Los Angeles, California.

“There’s nothing tougher than Watts,” says physical education teacher Ayesha Brooks. “Markham is surrounded by four of the roughest housing projects in L.A., with a high population of gangs coming out of them.”

And, as in many middle schools, Markham had excluding cliques. The girls’ locker room was bullying central. “They would shove the girls into the shower and beat them until they joined the gang. This was a norm,” says Brooks.

Trained by an alliance of California groups and the International Institute for Restorative Practices (IIRP), Markham introduced community-building circles, beginning by focusing on the girls.

The girls took to the circles right away. With regular opportunities to share details of their lives in the circles, the girls were able to build relationships with each other and the staff, and the bullying and fighting became a thing of the past.

In addition to how to hold circles, Brooks, a 23-year teaching veteran, has been learning many facets of restorative practices at the International Institute for Restorative Practices (IIRP) Graduate School. “I realized I was doing to kids, instead of working with them.” Reflecting on her own leadership style, she realized that her students were intimidated by her and afraid of what she might do to them if they misbehaved. She wasn’t building relationships with them and enabling them to do so with each other.

Brooks highlights out how one eighth-grade girl really turned things around.

“K” was “very rough around the edges — a bully and a fighter,” she says. Brooks began using affective statements to tell K how her behavior affected Brooks and others and holding impromptu conferences — on-the-spot meetings — with her to discuss immediate issues. These processes enabled Brooks and K to build a relationship, so K took responsibility for her behavior.

Now K is fully engaged in her school experience. “It was such a quick turnaround,” says Brooks. “Now she’s at every circle; she wants to lead the circles. She’s able to self-regulate. She’s my pride and joy. This is what made me dive into restorative practices.”

K’s other teachers have noticed the change. Not only is she sitting through classes, she’s turning in her work and passing her courses, demonstrating her intelligence and potential.

Despite success with the girls’ behavior, school administration was wary about bringing together members of the rival neighborhood gangs, but Brooks trusted the process and convinced them to let her try.

For more than a year, circles have been held for a full period every Thursday, plus after school, to include more students. “These circles go flawlessly,” says Brooks. “The main thing is to make sure to follow the agreement [giving everyone a turn to speak]. We use a talking piece.”

“It’s amazing to see the empathy that’s been built using community-building circles,” she continues. “Students rally around one another and support each other. They don’t have to go outside school to find a place to feel safe and accepted. Now they have that on campus, so they’re not dropping out of school.” In fact, the circles have been so productive kids have been requesting them to address issues they feared might erupt after school.

“I’ve seen the difference in just a year.” 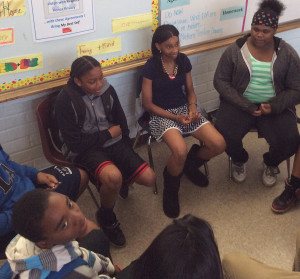 A circle at Markham Middle School

By now, half the school staff has been trained in restorative practices, and Brooks expects that by the end of the school year that number will have grown to 80%.

And restorative practices are working: Says Brooks, “Suspensions and expulsions have dropped, and we have not had a fight, violence or stealing for more than a year.”

“The need is so great here,” she continues. “Extreme poverty, homelessness, kids in foster care. We see as much as you can see.” Brooks is passionate about restorative practices and their potential to transform the Los Angeles Unified School District. “I’ve seen the difference it has made in just a year.” As a member of the Board of Directors of United Teachers Los Angeles (the teachers union), representing Markham Middle School, Brooks is spreading the word about restorative practices throughout her school, her city, and her state.