Throughout Latin America there are growing efforts to confront the social consequences of poverty and violence. Restorative practices provides an outlook that is appealing to many who are working to bring people together to resolve problems and transform the nature of society.  This two-part article discusses how individuals in Latin America are implementing restorative practices in their organizations, schools and communities. Part one discusses Nicaragua, Panama and Colombia. Part two talks about Mexico and Peru and references work in Brazil. 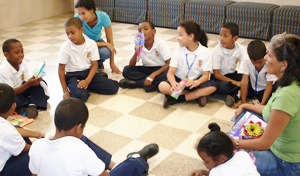 This is part of one of an article on how individuals in Latin America are implementing restorative practices in their organizations, schools and communities. Part one discusses Nicaragua, Panama and Colombia. Part two talks about Mexico and Peru and references work in Brazil.

Throughout Latin America, there are growing efforts to confront the social consequences of poverty and violence. Restorative practices provides an outlook that is appealing to many who are working to bring people together to resolve problems and transform the nature of society.

Miguel Tello, originally from Mexico, now lives and works in San Jose, Costa Rica. Tello first got involved with the IIRP when he contacted IIRP founder Ted Wachtel for permission to translate Wachtel’s article “Restorative Justice in Everyday Life” into Spanish to use at a Prison Fellowship International conference. Tello then took IIRP trainings and became an IIRP trainer.

As executive director of the Strachan Foundation, a small family foundation established to promote social investment in Latin America through grants of up to $20,000 awarded to NGOs (nongovernmental organizations) in six countries, Tello can offer restorative practices training to organizations throughout the region. So far he and his staff have trained three organizations in Guatemala, two in Panama, one in San Salvador, one in Nicaragua and a school in Costa Rica. Said Tello, “There is a huge thirst for restorative practices. Once people experience it they want to know more; they want more training.”

Tello is working to bring restorative practices to schools in Costa Rica and has trained teachers and administrators at the Country Day School in San José, where his own children are students. Said William Large, principal of the elementary school, “In 20 years of teaching, I have not found anything as effective as restorative circles for working with children and solving conflicts. It is the best thing I’ve ever seen in action.” Large discussed the successful resolution of a bullying incident using a circle. In another circle students who had been talking negatively about a teacher spoke candidly to the teacher about how they felt, which resulted in improved relationships.

In Nicaragua Tello trained the staff of AMOS Health and Hope, which provides primary health care to the most vulnerable and difficult populations to reach in 27 rural communities. Now AMOS staff members employ the circle process to communicate with one another and make decisions, such as when 30 people used a circle to coordinate logistics around building latrines.

Circles are also used to address staff conflicts. Said Laura Parajon, medical director of AMOS, “For those of us out in the field needing a simple framework for dealing with conflict in the workplace or in the community the circle provides really good feedback; it’s a way to assure that everyone is heard.”

Parajon said that AMOS used a talking circle to help a village agree on where to place a new school. One group wanted it near their homes, another near theirs. In the circle, villagers used a talking piece so everyone knew whose turn it was to speak.

First each person addressed the question, “Why do you want the school?” to ensure that all were of the same mind. Then they answered, “Why do you want the school in one location as opposed to another, and how will that decision affect others in the community?” Explained Parajon, “Two people had donated land, but one location was better: right beside the road, on a dry, flat plot that wouldn’t flood.

The talking piece allowed everyone to speak and made all the difference in that community. “They came together to make a good decision,” said Parajon. After that process, she added, “Everyone in that community worked together to help build the school: old people, kids, everyone! Before it was done, kids were running in the school and so excited!”

Two years ago Tello trained the staff of Fundación Amaneceres, in Panama City, Panama, in the use of restorative practices and circles. This nonprofit organization operates a youth center that provides academic and psychological services for at-risk teens and theater and other arts programs in schools. The circle process proved useful for working with unruly first- to fourth-grade students in an after-school theater program at the Fatima School, in one of the country’s most violent neighborhoods.

Natalie Medina, director of Fundación Amaneceres, said they had hoped that theater classes would engage students and help improve behavior, but students were hitting each other and fooling around so much that the staff realized they needed something more. So they started using circles and a talking piece in the theater workshops.

If the theater activity involves students acting out different emotions, during the circle the teacher asks students, “Why are we happy?” and “What makes us sad?” Students use a talking piece so that only one person speaks at a time.

The school invites parents to class weekly to participate in circles. Circle topics include, “Say a good quality about your child or your parent,” “What are the qualities of a happy child?” and “Describe the neighborhood of your dreams.” The last subject prompts emotional responses because murders and gang activity are so prevalent in the region. Parents also learn how to use circles at home, and children make “family talking pieces.”

Fundación Amaneceres also uses circles in their programs with at-risk youth. One teenager spent a week in jail for shoplifting. After the boy was released the staff held a circle with him and his mother and sister. (The boy does not know his father.) He talked about the experience of being in jail, and the mother and sister had a chance to tell him what it had felt like for them.

Medina said Amaneceres use circles for staff team building, as well. These circles help resolve staff conflicts by providing a space where difficult things can be said in a safe setting. When new people come, a circle is held to integrate them into the community, and when someone leaves, a circle is used to say goodbye.

Colegio Nuevo Grenada, a primary, middle and high school in Bogota, Colombia, has implemented restorative practices across all grades.

Clara Cock, a parent and advocate for the school, said that when she returned to Colombia in 2003 after six years of living abroad she was appalled by how things had changed. “It was not just the things you read in the papers. People had begun to be very hard on one another, and it was especially noticeable for me among children,” said Cock. She and a group of parents who returned to the country at about the same time shared this perception, and they started working together to discover ways to curb bullying in the school.

The school has since trained its entire teaching staff, school administration, student body and 600 parents. Said Cock, “At the beginning there was a lack of understanding of what restorative practices was about. Some people thought that the philosophy was about letting bad things go without punishment. It was hard to make people understand that it is about changing our way of relating to one another, not just about dealing with hard situations. Some teachers have embraced this in such a good way. They’ve introduced it into their daily way of teaching, checking in on both emotional and academic issues.”

“We had a very notorious case on cyberbullying that went really well,” said Cock, adding, “We brought in the families and the children of all the people involved. The children opened up and had a good discussion about why it wasn’t okay to do cyberbullying. All the horrible things they had said about this boy — they were so ashamed to be faced with that — and for their parents to hear. It fixed their relationship with the boy who was harmed.

Afterward the boy could speak about it to the rest of the school. The other children were told about what had happened, what the boys felt about it, what they were doing to fix it, and how they were repairing what they had done.

School psychologist Gonzales explained that restorative practices builds lasting connections. She talked about used circles during a sixth-grade homeroom class. Students answered questions such as, “What did you do this weekend? Who needs help with anything? Who would like to receive or give support?” “This was two years ago,” said Gonzales. “Now the students are in eighth grade, but they still come to me to talk about problems or tell me what’s happening. The circles created a sense of belonging.”

“It has been so powerful,” continued Gonzales. “Everything we were taught [about restorative practices] works here because it’s about people. It doesn’t matter the age or the stage — it is for people and from people. It helps us give the message that we care, and that we expect that everybody will. I can’t imagine us without restorative practices. I don’t know what we did before. I don’t know what things would be like without it.”