My Life and Work with Restorative Practices 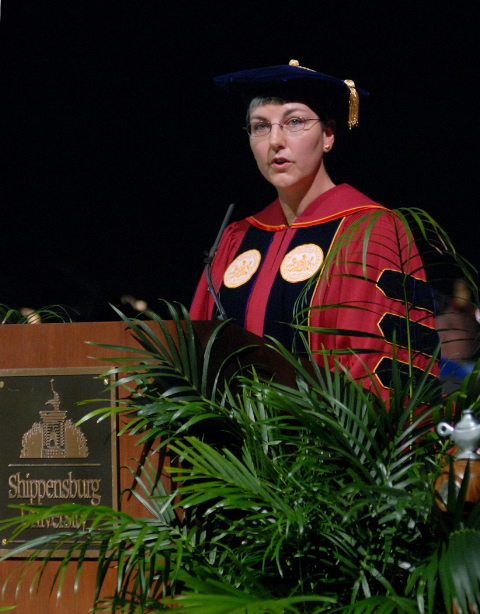 Judy Happ, vice president for administration at the IIRP Graduate School and president of Community Service Foundation and Buxmont Academy, delivered the alumni commencement address at Shippensburg University’s School of Graduate Studies, in Shippensburg, Pennsylvania, USA, on May 7, 2010. The following are excerpts from the address.

I am vice president for administration for the International Institute for Restorative Practices Graduate School. We teach educators and others who work with children and youth to employ restorative practices in their work.

Restorative practices are processes and strategies for the development, repair or improvement of relationships, social capital and social discipline through collaborative empowerment.

I’m also president of the Community Service Foundation and Buxmont Academy programs for at-risk youth, all of which are informed by the principles of restorative practices. In the last 33 years these programs have helped more than 9,000 youths turn their lives around.

Over the years I have come to believe and know that restorative practices are a useful and effective way of working with people in all types of settings, helping at-risk youth, creating positive school climate or running an organization or business with adults.

I had the opportunity to attend Shippensburg because of the Juvenile Court Judge’s Commission (or JCJC). For those of you who don’t know, in 1982 the JCJC worked with Shippensburg University to create the weekend Master of Science in Administration of Justice program for probation officers.

When I was an undergraduate at York College of Pennsylvania I was able to complete two summer internships at the JCJC. I oversaw the intern program for all county probation offices and traveled to many juvenile programs in the Commonwealth. After completing my undergraduate program, I became a juvenile probation officer in Dauphin County, Pennsylvania, and qualified to participate in the master’s program here at Shippensburg. In a few short years I had the opportunity to see the criminal justice system from the state level, to the local level, to the street level, as well as add research and theory to my in-field experiences. I believe understanding the many sides of an area, like the juvenile justice system, has always helped me excel in my work.

After my time with Dauphin County Juvenile Probation, I moved to Bucks County, Pennsylvania, and was hired as a counselor by Community Service Foundation (CSF). The focus at CSF was on helping dependent and delinquent youth understand that they had the power of choice and were responsible for their choices, as well as teaching them to interact appropriately with others.

At CSF we were becoming explicit in our language and practice regarding how to work effectively with young people. We began to think and talk about restorative practices and processes, from the informal to the formal.

An example of a formal restorative process is called conferencing. A restorative conference is a facilitated process that brings together “victims” and “offenders” and their supporters to talk about an incident of crime or wrongdoing and begin to repair any harm that has resulted. (In place of the words “victim” and “offender” we say “the person who committed a crime” or “the person who misbehaved” and “those affected by the crime or misbehavior.”)

Because of my background in juvenile probation, at first I was skeptical that conferencing could really hold an offender accountable. I could understand how the process might help victims, but I assumed that it was “soft” on offenders.

Then I saw a clip in the video Introduction to Conferencing (http://store.iirp.edu) that changed my assumptions. In it, a teenage girl who had been involved in a restorative conference said that the experience had been much tougher for her and had much more of an impact on her than being in court. When she had gone to court in the past, her lawyer and her probation officer had spoken for her, and that had made it much easier for her. But in the conference she had to tell everybody what she had done, and she had to hear her younger sister say how disappointed she was in her. In the conference, everyone who had been affected by what the girl had done was able to express emotion, and this allowed their relationships to be restored. I then understood the power of conferencing for offenders – that being engaged in the process, working with others toward the resolution, was key.

At CSF we saw how well these restorative concepts — choice, taking responsibility for one’s decisions, interacting with others in appropriate ways — worked to help youth positively change their behavior. Then we implemented several empirical research studies over a period of seven years, which confirmed what we had experienced. The next step was to share these concepts with the educational community at large. So we created a graduate school: the International Institute for Restorative Practices, or IIRP.

When the IIRP was launched, I decided to go back to school and get my second master’s degree. Some of you know what that feels like – choosing to go back to school after 20-plus years. You keep asking yourself, why did I do this again? Learning the new technologies. Studying, writing papers. Balancing family life and a job with school. For me, it was exhilarating and exhausting, all at the same time. I would not have changed a minute of those two years – just like I would not have changed anything in the two years I was at Ship for my first master’s degree.

I have been asked, why a second master’s? I earned a Master of Restorative Practices and Education. While I am not technically an educator, in my leadership and supervisory roles I am effectively a teacher, and I wanted to apply the theory and research I learned in classes to my role as a supervisor. As my degree from Ship continued to affect my policy and practice in the field of criminal justice, I hoped that my IIRP degree would help me work to change civil society by restoring and building relationships through the free expression of emotion. I was also sure that being a student would help me in my role as an administrator, developing our new graduate school.

I spoke before about the range of restorative processes, from formal to informal. In my supervisory capacity I employ informal restorative processes all the time. These include affective statements, which express emotion and let people know how their behavior has affected others, and affective questions, which ask people to think about how their behavior has affected others.

By using affective statements and questions, I believe I have “neutralized” what is generally perceived as criticism in other workplaces. The staff I supervise recognize that the affective statements and questions are about their actions, not about their value as people. Employees want to do well in their job, and these are simple ways to ensure appropriate behaviors.

When the occasion calls for it, we employ more formal restorative practices in our workplace. I like to use proactive circles to establish norms in the office and raise consciousness about issues. Circles afford all staff an equal opportunity to participate and share. For example, we once had an issue about general neatness in the office. You know what I mean, the stapler is never put back, no one empties the shredder or refills the paper clip container or cleans out the microwave. So the eight office staff sat in a circle. I started by saying how my happy mood would drop when I arrived at work and saw the foyer disheveled with things out of place. Or when I went to heat my lunch and the microwave was a mess, I felt disgusted. I said that I wanted to feel good about where I worked, and that little things like this mattered to me. I wondered how others felt. We went around in a circle, everyone taking turns. All the office issues came out, and we set norms about how we wanted the office to look. The circle took about 30 minutes, and everyone left the circle feeling connected, rejuvenated and clear about what to do. It was time well spent, not only in solving seemingly trivial office issues, but also in strengthening the office community.

How do I express my gratitude to the JCJC for the Master of Science in Administration of Justice program at Shippensburg, as well as for the internships I had there when I was an undergraduate? I continue to work in the field to influence practice and policy. (I was actually first introduced to the concepts of leadership that I now understand as restorative here at Shippensburg, in a leadership class.) I believe it is my responsibility to apply what I have learned in both my master’s programs — at Shippensburg and at the International Institute for Restorative Practices — in my daily life, both personally and professionally. I have come to realize that this is my passion – working with others, managing people and helping others reach their untapped potential.

I am sure that the degree you have earned here at Shippensburg will help you realize your passion, and I hope, in some way, it will involve building and restoring relationships through your interactions with others.