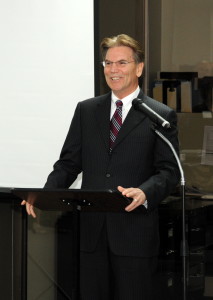 Dr. Joseph Brosnan delivering remarks at the IIRP Accreditation CelebrationGood afternoon. I’d like to thank the International Institute for Restorative Practices for inviting me to this celebration today. I’m honored to be here. It is always a great and rare day when an institution receives its original accreditation from the Middle States Commission on Higher Education. The entire team at the IIRP deserves credit, but special thanks must go to your founder and president, an early pioneer and ceaseless advocate of restorative practices, Ted Wachtel. We are here today because of his persistence, his patience and his profound belief in an idea.

Back in the 70s, he was among the army of people who wanted to change the world. A lot of those people, for various reasons abandoned their original ideals and goals. Ted never did.  Success, however, did not come quickly. Nothing good ever does. But over time, his ideas began to take hold. Tenacious and stubborn, he found himself in increasingly larger arenas, with more young clients and more dramatic results.

As I looked back over his career in preparation for today’s celebration, I was amazed by the growth and the progress of his philosophy and its application. Working closely with his wife Susan, this amazing couple went from instructing a single child 34 years ago to founding a graduate school today. A major component of this success was Ted’s ability to inspire – to convince others to share his mission and passion. He has always been honest and trusting with his team, and they have returned the gesture with loyalty, dedication and hard work.

For many on the staff and faculty, starting a school from scratch must have been the hardest thing you ever did. I know a little bit about accreditation, and if I said you had to jump through hoops, that wouldn’t even explain half of it, and my experience is only with the re-accreditation process. I serve on the executive committee of the Association of Independent Colleges and Universities for the Commonwealth. Anytime anyone mentions Accreditation or PDE program approval you can feel the mood change in the room. Please give yourselves a round of applause. 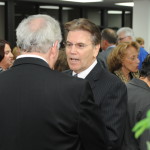 The accreditation you celebrate today represents incredible progress in Ted’s original goal to change the world. The power of what the IIRP does is reflected in the idea that what is taught can help alleviate conflict and violence on a personal level as well as on a global level. Ted believes that if properly applied, these practices can change the way the court system operates, the way Congress passes laws and the way nations treat each other. Ted, congratulations to you, your faculty and staff, to your alumni and students, and to the many people who have benefited from restorative practices. I wish you and the IIRP the best of luck and the brightest future. Thank you.