Ted Wachtel, president of the International Institute for Restorative Practices, speaks on the philosophy and history of restorative practices. From family group conferencing to restorative circles, the practices have migrated beyond the field of criminal justice to schools and workplaces, where they have proven useful in resolving wrongdoing and conflicts. The paper was presented at "Dreaming of a New Reality," the Third International Conference on Conferencing, Circles and other Restorative Practices, in Minneapolis, Minnesota, USA, August 8-10, 2002.

From "Dreaming of a New Reality," the Third International Conference on Conferencing,
Circles and other Restorative Practices, August 8-10, 2002, Minneapolis, Minnesota

All of us who attend a conference like this are probably dreamers. We are likely to be people who see the possibility for a future that is different from the present. Each of us in our own fields of endeavor—whether we are developing new models of practice, or evaluating them, or writing about them, or making films about them, or learning about them, or simply using them—are playing a role in bringing about a new reality.

In 1977, my wife, Susan, and I set out to create a new reality when we founded our first school for troubled youth, establishing a non-profit organization we called the Community Service Foundation. The name, although seemingly generic, was based on a quotation from a speech on education by Albert Einstein. He said that “the aim [of education] must be the training of independently acting and thinking individuals, who, however, see in the service of the community their highest life problem.” Maintaining balance between individual and community has served as a guiding principle for our endeavors. That balance manifests itself in how we define our underlying methodology, which we now call “restorative practices.”

In the social discipline window we contrast “punitive” and “authoritarian” approaches to social discipline, which rely on a lot of control but little support, and “permissive” and “paternalistic” approaches, which are high on support but low on control, with what we call “restorative” or “authoritative” strategies in which we employ both high control and high support. When we fail to respond to the need for social discipline we have neither control nor support and are therefore “neglectful” or “irresponsible.” When we are being restorative we try to engage everyone affected by wrongdoing or conflict in the process of resolution. Expressed another way, restorative practices do things with people, rather than to them or for them. 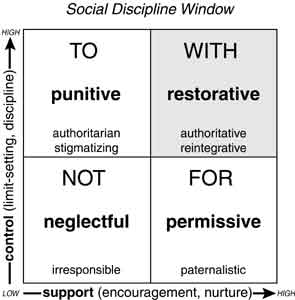 The pioneering prototypes of restorative justice, such as victim-offender mediation, brought together the primary individuals involved in a criminal offense to try to repair the harm. Since the advent of family group conferencing in New Zealand in 1989, however, the perception of what constitutes a restorative process has widened to embrace more of the community. When Terry O’Connell, an Australian police officer, developed the scripted model of conferencing in the early 1990s, he deliberately included the victims’ and offenders’ friends and family. Sentencing circles and healing circles similarly widen the range of participants.

Conferences and circles do more than increase the number of participants in the process. They also reduce reliance on the individual mediator or expert and place greater responsibility on the community itself. A good facilitator organizes the event and sets a cooperative tone, but then trusts in the community to maintain decorum. The likelihood that professionals would dictate rather than allow the extended family to formulate its own solutions resulted in New Zealand legislation which mandates that both youth justice and child protection conferences exclude the professionals from the room during the time that the family meets to create a plan.

Restorative processes, as we define them, are also consistent with Silvan Tomkins’ assertion that the best environment for human beings is one in which there is free expression of emotion, minimizing the negative and maximizing the positive. Conferences and circles provide a safe framework for that free expression to occur. Negative emotions, once expressed, tend to decrease in intensity. They also give way to positive emotions so that the participants, resonating with each others’ expressed feelings, move together toward resolution.

Conferences and circles have migrated beyond the field of criminal justice to schools and workplaces where they have proven useful in resolving not just wrongdoing, but other kinds of conflicts. The New Zealand child protection conference, although sometimes modified or renamed, has been widely adopted in social work. All of these processes shift decision-making from the professional to the family and community and create a safe container for the free expression of emotion.

When I met Terry O’Connell in 1994 our Community Service Foundation and its sister non-profit, Buxmont Academy, had grown substantially and were operating schools, group homes and other programs for delinquent and at-risk youth in four Pennsylvania counties. I was deeply moved by his emotional stories about conferencing, so I decided to create Real Justice, a program to promote conferencing. We invited O’Connell and his colleagues to provide the initial trainings. When he visited and pointed out that our schools were running informal restorative conferences all day long, we started to recognize the limitations of a vision that included only the formal restorative justice processes. In 1999 we articulated the concept of “Restorative Justice in Everyday Life“ and soon began using the broader and more flexible term, “restorative practices.”

By 2000 our efforts led to the founding of the International Institute for Restorative Practices, a non-profit educational organization dedicated to fostering restorative practices in education, youth counseling, criminal justice, social work, organizational leadership and other applied social disciplines. Our annual conferences, which for the foreseeable future will alternate between North America and Europe, provide a forum for anyone who shares the dream of a new reality based on restorative practices.

So to all you dreamers out there, welcome to the Third International Conference on Conferencing, Circles and other Restorative Practices.