"Dreaming of a New Reality": Chapter 1

You may download a PDF of this article for your personal use.

This article is an excerpt from IIRP president and founder Ted Wachtel’s new book, Dreaming of a New Reality: How restorative practices reduce crime and violence, improve relationships and strengthen civil society, published by the International Institute for Restorative Practices, in association with the Piper’s Press. Through stories and statistics, the book demonstrates the promise of restorative practices to heal victims, prevent bullying, curb conflict, reduce school disciplinary problems and boost workplace satisfaction and productivity. It also outlines the history and development of this growing social movement, as well as a vision for its future. 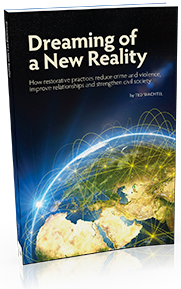 Order the book in print or electronic format

I first presented “Dreaming of a New Reality,” a multimedia slide show, to an audience of 500 social workers in March 1977. I had been asked to create an inspirational keynote presentation to open a professional conference at the University of Pennsylvania in Philadelphia. While it was well received, I may have been the person most impacted, because in making the presentation I met my own need for encouragement at a time when I was often consumed with self-doubt.

The eloquent quotations of notable thinkers and the lyrics from contemporary songs reassured me that quitting my job as a young public school administrator and trying to start a school for delinquent and at-risk youth was not a foolish utopian enterprise. Concluding the slide show with the Beatles’ song “Let it Be,”  [1] which accompanied a sequence of my photos showing the sun sinking into the Pacific at the Oregon coast, Carl Sandburg’s words summed it all up: “Nothing happens unless first a dream.”  [2]

I was also moved by Henry David Thoreau’s prescriptive message, synchronized in the presentation with a vast three-screen panorama of a Rocky Mountain valley: “If you have built castles in the air, your work need not be lost; that is where they should be. Now put the foundations under them.”  [3] In that same month I filed the articles of incorporation for the Community Service Foundation (CSF),  [4] the first of a series of non-profit organizations and projects that various collaborators and I would establish in the coming decades — bridges on the road to a new reality.

Susan Wachtel, my wife, and I had begun teaching in public schools in 1968. Neither punitive nor permissive, we were good at engaging students who exhibited poor behavior. We both were concerned with the increasingly inappropriate attitudes of a growing number of young people, as well as the tendency for public schools to react to those students in ways that further alienated them. This loss of social capital — the relationships that bind people together and create the trust, mutual understanding and shared values that make cooperative action possible  [5] — seemed to be at the heart of the problem.

In light of our experience with difficult students and while working as volunteers at a group home for delinquent youth, we became fascinated with the question: “How do you get people who are on a negative path in life to change to a positive path, and how do you prevent the negativity in the first place?” The search for answers to that and related questions became our lifelong quest.

Our journey coincided with the work of others and has coalesced into an exciting new social science called “restorative practices.”  [6] In the decades since we taught public school, we found that restorative practices not only reduce criminal offenses among delinquent and at-risk youth in our CSF programs, but also improve behavior and enhance learning among the special education and alternative education students who attend our Buxmont Academy  [7] schools (Chapter 2: The Worst School I’ve Ever Been To).

In 2000 we founded the non-profit International Institute for Restorative Practices (IIRP), in Bethlehem, Pennsylvania, U.S.A. The IIRP tagline, prominently displayed on its website  [8] and letterhead, is “Restoring Community in a Disconnected World.” Now an independent accredited graduate school and global training and consulting organization, to date the IIRP has worked with professionals from over 55 countries, and we have more than 300 affiliates and licensees in 16 countries (Postscript).

My colleagues and I have used restorative practices to help even the most challenging public and private schools reduce violence, crime, bullying and misbehavior (Chapter 3: Safer Saner Schools).

Restorative conferences produce positive outcomes in dealing with criminal offenses for victims, offenders and their families and friends, but especially in helping victims cope with the trauma caused by crimes (Chapter 4: Real Justice).

Most recently we brought the benefits of restorative practices to residential life in higher education (Chapter 7: Building Campus Community).

Each of these chapters demonstrates how restorative practices change the world for the better in a particular sphere of society. In the three-and-a-half decades since I presented “Dreaming of a New Reality,” we now have good reason to assert that restorative practices effectively answer some of our modern societies’ greatest challenges.

"We now have good reason to assert that restorative practices effectively answer some of our modern societies’ greatest challenges."

For example, how might schools address problematic student behavior in a way that produces meaningful and sustainable improvement? In May 2012, the principal of Freedom High School in Bethlehem, Pennsylvania, dealt with four senior students who seriously vandalized the school shortly before graduation. In the past they would simply have been punished and excluded from the graduation ceremony. Instead, the school principal, Michael La Porta, whose school began implementing restorative practices nine months earlier, asked the IIRP to provide a facilitator to organize a “restorative conference.”

At the conference, the facilitator followed a “restorative script,” asking each of the four students a series of open-ended “restorative questions” that allowed them to speak freely and share their feelings. The facilitator then asked similar questions of the school custodians, administrators, the boys’ sports coaches, the school police officer and the students’ parents. Everyone had a full opportunity to be heard.

The students told their stories, listened intently and learned how their behavior affected others, sincerely expressed their remorse and participated in deciding how they should compensate for the damage they had caused. The custodial staff explained all the problems the damage created for them. The arresting police officer shared how difficult it was to face the tearful reactions of parents when he informed them that their sons’ actions were considered felonies under the law. The coaches and the parents expressed their disappointment and concern for the boys’ future. The facilitator later said that there were moments when there was not a dry eye in the room.

The four students agreed to make public apologies to the faculty and student body, provide 100 hours of service at the school and come back the following school year to speak publicly to other students about avoiding similar harmful behaviors during senior week. While the local public prosecutor insisted on bringing criminal charges, the principal planned to actively support the young men through the judicial process. Because the young men took appropriate responsibility for what they did wrong, the principal made an unprecedented decision to allow them to graduate with their classmates. He later described the conference as “one of the most impressive, intense and exhausting experiences in my professional career.”

Bethlehem, like most school districts, had previously followed a “zero tolerance” policy through which the school board mandated harsh responses to inappropriate behavior. But behavior was getting worse, not better. However, at the beginning of the school year, the school district superintendent, Joseph Roy, asked the IIRP to introduce restorative practices at Freedom and Liberty, the two Bethlehem area high schools.

“We can’t expel our way to safer schools. We need to build positive relationships to get ourselves there.”  [9] In 1998, Roy had been the IIRP’s first ally among public school principals when he took the risk and implemented restorative practices at Palisades High School, the school my own children attended. Impressed by the positive outcomes, he subsequently introduced restorative practices at two other southeastern Pennsylvania high schools before returning to Bethlehem in 2010, where he had previously served as an assistant principal.

Speaking of that experience in a documentary film called “Beyond Zero Tolerance,”  [10] Roy said, “I learned as an assistant principal at a large, more urban high school where I suspended many, many, many people — the students who changed their behavior — it wasn’t because they got suspended. It was because they developed a relationship with me. … What we’ve tried to do with restorative practices — it puts a conceptual framework around the ideas of building positive relationships, having respect — and allows a school to be able to look at things in a different way.”

Roy further explained: “Most traditional high schools are not designed to be restorative. So you have years and years, decades and decades of traditional discipline. Because that’s been the dominant culture, that’s what people expect. So the challenge to change it in a school is to convince people that you can deal restoratively and you’re still holding people accountable.”

We can’t expel our way to safer schools. We need to build positive relationships to get ourselves there.”

In September 2012 the two Bethlehem high schools reported the 2011–2012 discipline data from their first year using restorative practices: Suspensions dropped 20 percent.  [11] In particular, suspensions for the most serious infractions declined dramatically: Suspensions for endangerment dropped 64 percent, for insubordination 59 percent, for physical assault on a student 75 percent, for threats, harassment and bullying 81 percent. Expulsions dropped 41 percent.  [12] I’m a pragmatist. If everything is working well, then why change anything? But most people seem to share a growing concern that things in general are not going well.

Restorative practices build social capital and have positive implications for all social settings, from families to schools to workplaces. Drawing from both liberal and conservative values, restorative practices cultivate a society based on participation and mutual self-reliance, where as citizens we take greater responsibility for our own lives. Leaders and government play a role in achieving societal well-being, but equally important is support from our own social networks: family, friends, neighbors and community.  [13]

While the field of physics still searches for its “unified grand theory of everything” that can explain all physical phenomena, we have come upon a unified grand theory that explains how social entities may function best. This theory rests upon a fundamental hypothesis — that “people are happier, more cooperative and productive, and more likely to make positive changes when those in positions of authority do things with them, rather than to them or for them.” This book shares true stories and growing evidence that support this premise — from varied fields of endeavor — in a growing social movement that is improving human behavior and strengthening civil society around the world.  [14]

Ted Wachtel is the president and founder of the International Institute for Restorative Practices (iirp.edu), an accredited master’s degree-granting graduate school. Wachtel and his wife, Susan, also founded the Community Service Foundation and Buxmont Academy (csfbuxmont.org), which operate schools, counseling and residential programs in Pennsylvania, employing restorative practices with delinquent and at-risk youth. Wachtel has written and produced numerous books and films on restorative practices and other topics. He has done keynote presentations and workshops on restorative justice and restorative practices at conferences and events around the world.

To request permission to reprint, please contact the This email address is being protected from spambots. You need JavaScript enabled to view it..