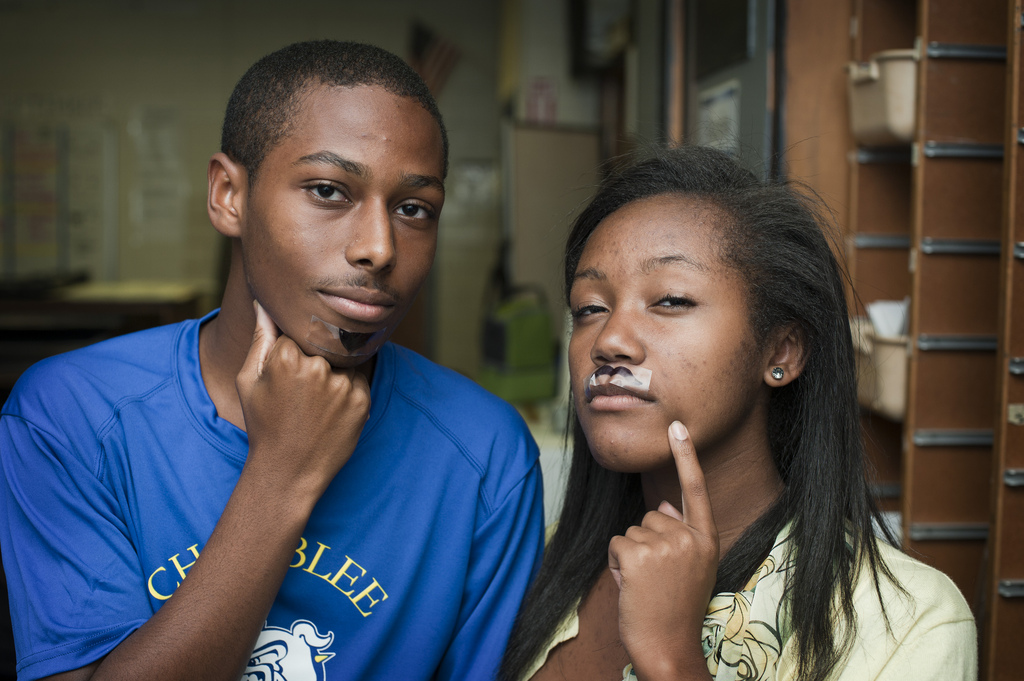 "Absolutely no horsing around in MY art room..." Photo by Angela @ My Daily Struggle, Flickr Creative CommonsAn article May 8, 2012 in the Connecticut Post by Brittany Lyte is titled "A racial divide in school discipline: Blacks, Hispanics suspended at a higher rate." Page 1 of the story discusses recent news that minority students face disproportionate punishment in schools as applies throughout Connecticut. Page 2 explores reasons for the discrepancy and proposed legislation to make school discipline policies more transparent. At the end of the page and then into page 3 Ted Wachtel is quoted relating the restorative practices approach to this discussion of education discipline policy:

Instead of trying to distribute suspensions equally among races, school officials should strive to reduce the use of suspensions, said Ted Wachtel, president of the International Institute of Restorative Practices, a graduate school in Bethlehem, Pa., that trains public school teachers and staff to engage students in the discipline process.

"Our goal should not be to dole out punishments like suspensions and expulsions more equitably, for the simple reason that they are ineffective in producing accountability and behavior change in kids," he said. "These types of punishments have, in fact, been shown to have exactly the opposite effect; repeatedly kicking children out of school turns too many of them into kids with records, putting them on the path to involvement in the criminal justice system and feeding the so-called school-to-prison pipeline."

IIRP advocates for programs that give students a voice in the discipline process, in place or in addition to suspensions and detentions.

"Instead of suspending kids from school or in addition to suspending kids from school, what about actually getting everybody to talk about what happened?" said Wachtel. "For a young person to actually have to face the people he or she has harmed and actually learn how he or she has impacted them can be very effective. Punishment is actually very passive; you get punished and you don't have any responsibility. You get to be angry at the people who suspended you. But really you don't get the opportunity to think about how you affected other people."

In one school district in Baltimore, suspensions dropped from 86 during the 2008-09 school year to 10 a year later when the district adopted a restorative practices program, according to IIRP.

"If it's a mild problem -- a student acting out in the classroom -- (the teacher) might tell the child how it makes them feel," Wachtel explained. "`You know, it really hurts my feelings when you behave like that.' Kids actually don't think of authority figures as having feelings sometimes. For some kids, that's enough to get them back on track."

Wachtel said schools still might have to suspend a student, but they shouldn't just stop at that action.

"If there's a violent fight," he said, "you might have to suspend a student. You might have to call the police. But if that child is going to continue in the school, that's not enough. You really need to get them to talk about and understand how their actions have affected other people."

The article then discusses what is called "Make Your Day," a policy in one school that focuses on "holding kids accountable." Jack Lynch, principal of the school, says something that sounds very consistent with the restorative approach:

"It's all about accountability," Lynch said. "It's not punishment necessarily because punitive actions don't always produce positive results. You want to make sure that the child has a choice. If I choose to behave this way, then I'm choosing this consequence."