Karin Gunderson, of the Northwest Institute for Children and Families, University of Washington School of Social Work, Seattle, Washington, U.S.A, reports the positive results of two significant studies on family group conferencing (FGC): "Long Term and Immediate Outcomes of Family Group Conferencing in Washington State," June 2000, and "''Connected and Cared for'': Family Group Conferencing for Youth in Care," June 2002. The paper was presented at the first in a series of three IIRP conferences with the theme, "Building a Global Alliance for Restorative Practices and Family Empowerment," in Veldhoven, Netherlands, August 28-30, 2003. 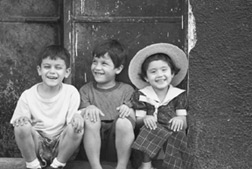 are increasingly criticized for failure to protect the children they are mandated to serve. Substance abuse, an epidemic in the 1980s, is now a persistent condition of child welfare and substance abuse-related neglect, the major form of child maltreatment dealt with by agencies. Effective intervention, however, is elusive in the face of budget cuts and large caseloads. Reunification rates for children neglected as a result of parental substance abuse are the lowest of all forms of abuse and neglect. Many of these children end up "legal orphans," because parental rights are terminated before permanent families can be found.

In the last decade the number of foster homes in the United States has steadily declined and, not surprisingly, the rate of kinship care has increased. This move to kinship care is the result, in part, of legislation, lawsuits, the decrease in available foster homes, the benefits of kinship care to children and pressure from a growing constituency of relatives, namely grandparents.

In spite of the rise in kinship care, social workers, even ones who value family involvement, often fail to locate and work with the extended families of children in out-of-home care. Child welfare systems are set up to utilize formal licensed foster care. In most states there are no parallel systems for kinship care. Finding relatives, engaging them, sharing decision making and supporting placements are time-consuming activities that social workers are often too busy to do.

Set against this backdrop, it is not surprising that restorative practices like family group conferencing are attracting attention and gaining in use. While not a panacea, the immediate benefits of family group conferencing are well documented. Family are located and engaged. Family resources are tapped. Adversarial tensions are reduced. Confusion about safety, risk and services is diminished and a wider safety net of informed people is developed.

What is Family Group Conferencing?

Family group conferencing (FGC) is a participatory approach to case planning that was originally developed by the Maori people of New Zealand, in response to concerns that the child welfare system was removing their children from their homes and cultural ties at a disproportional rate.

The traditional role of family has been to come to the aid of other family members when necessary and to ensure the care and protection of the children in the family. Before the days of child protective services, responsibility fell exclusively on the shoulders of the family and their support networks (such as voluntary charitable organizations, religious institutions, neighbors and family friends).

As society has shifted and government agencies have assumed a larger and larger role in the protection of children, many extended families have either chosen to give up their traditional role to government agencies or have found that they were excluded from the process despite their interest.

Family group conferences provide a structure that permits parents and their extended family the opportunity to assume a decision-making role and to take responsibility for developing a plan that will ensure the safety and protection of their children.

FGC in Washington is a three-phase process involving preparation of all parties, the meeting and follow-up. Facilitators, who generally do not co-facilitate, handle all tasks from referral to distribution of the plan. Referring social workers are responsible for monitoring and supporting the plan. Referral is voluntary for social workers and participation is voluntary for parents and family.

The meeting itself follows the New Zealand model in that there is an information phase, the private family meeting and presentation of the plan to the social worker. Social workers retain responsibility for the case and may decline the plan if it does not meet safety concerns. The referring social worker clearly communicates at the start of the conference any parameters on the family''s planning options. (For example, the social worker will let the family know if return to parent is not an option the state will support.)

Generally in Washington FGCs are open to any case, with four exceptions. The exceptions are: (1) domestic violence in the family with no way to ensure the safety of the participants, (2) sexual abuse in the early stages of prosecution, (3) no family available and (4) nothing for the family to decide. Most referrals are accepted.

The Three Phases of the Family Group Conference

PART I: Information Sharing — Information about the case is shared with family. The social workers and other service providers discuss both the positives and the concerns about the family and how they relate to the safety and well-being of the child(ren). The goal is to provide the family with as much information as possible about how the family became involved with the child welfare system and the current situation. It is important for family to hear all the information at the same time and t"o ask questions. Family members are not usually asked to provide information during this part. This is also the time for the social worker to let the family know if there are any plans they cannot accept, due to safety issues that relate to the children, and then to address those issues in the plan.

PART II: Private Family Time — Family meets alone without social workers or service providers. This gives them the opportunity to discuss the child''s needs and to create a plan that will ensure the child''s safety and well-being. They are also asked to discuss the needs of the parents and any caregiver. The coordinator and social worker remain available to answer questions, but do not stay in the room. The family takes as long as needed. In spite of the often emotional nature of the meetings, families create plans that meet the protection and safety needs of children.

PART III: Reviewing and agreeing on the plan — This is the final part of the family conference. Once the family has created their plan, they present it to the social worker. The social worker reviews the plan with the family to determine if it meets the health and safety needs of the child. The social worker may approve the plan as is, or the family may be asked to consider changes to meet any remaining concerns if there is disagreement. Everyone receives a copy of the plan (Hansen, M. Washington FGC Training Manual, 2000).

Descriptive studies, primarily focusing upon process measures and immediate results, report high degrees of family and professional satisfaction and an expansion of the quality of support available to families who have participated (for a review, see Lupton, 1999). While pleased with immediate outcomes of FGC, managers in Washington state wanted to know if working with families in this way would have a longer-term positive impact on reunification, permanence and safety outcomes.

Beginning in 1999, with funds from the Stuart Foundation, the University of Washington began collaboration with the Washington State Children''s Administration to conduct two outcome studies. The first, entitled "Long Term and Immediate Outcomes of Family Group Conferencing in Washington State," evaluated post-conference outcomes for the general foster care population. The second, entitled "Connected and Cared For: Family Group Conferencing for Youth in Group Care," evaluated post-conference outcomes for youth in residential treatment. The following are summaries of those studies. The entire studies are available by request (email This email address is being protected from spambots. You need JavaScript enabled to view it.).

A retrospective study funded by the Stuart Foundation and conducted by the Northwest Institute for Children and Families, University of Washington School of Social Work, Seattle, Washington, June 2000

Placements were stable over time.

A retrospective study funded by the Stuart Foundation and conducted by the Northwest Institute for Children and Families, University of Washington School of Social Work, Seattle, Washington, June 2002

Data was collected on 28 children who had a family group conference while they were in group care in Washington state. Information was gathered from family plans and the Washington state foster care database (CAMIS). A family plan is the document the family develops during the conference, which must meet social worker concerns for safety. Family plans outline placement recommendations as well as services and supports that the family feels are needed for the child and parents. Family plans are informed by information the family gets at the meeting from service providers.

The process is family centered and culturally sensitive.

Family offered to support the child.